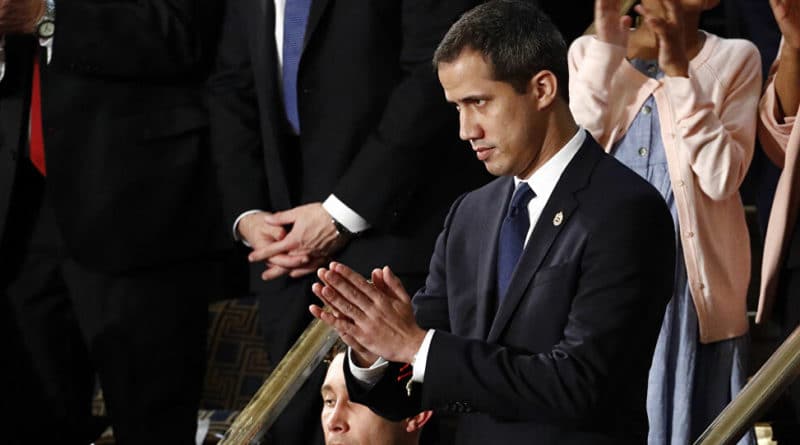 Despite hundreds of millions of dollars being funnelled by the US into Juan Guaido’s campaign, the self-proclaimed interim president has failed to deliver on his promise to unseat Venezuelan President Nicolas Maduro. Former Ambassador Dr Angel Rafael Tortolero Leal has explained what’s behind the US pick’s failure and where the money has gone.

However, not everything is rosy in the Guaido-led opposition camp at home despite the self-declared interim president’s international bravado: in mid-January, Venezuelan journalist Fania Rodrigues shed light on suspected corruption within the Guaido team’s ranks while the country’s opposition remains divided over the lack of transparency with regard to foreign aid.

Welcome home Juan Guaido. Ha! I don't get tired of seeing this. Venezuelans are suffering because of this traitor.
He got a well deserved ass whooping! https://t.co/r3IMEjpL4z

RELATED CONTENT: Chancellor Arreaza at the UN: “US Blockade on Venezuela Has Caused $120 Billion in Losses”

There’s No Records of How Guaido’s Spending Funds

According to Dr Angel Rafael Tortolero Leal, professor at the Universidad Nacional Experimental de los Llanos Centrales Rómulo Gallegos, diplomat and former ambassador, in the eyes of the Venezuelan people Guaido is “a thief who in just one year managed to accumulate a great fortune with the looting of [Venezuelan] companies abroad”.

Days after Guaido declared himself the “interim president” of the country, the US announced that it had handed him control of Venezuela’s holdings in the Federal Reserve Bank of New York and federally insured banks. Later, the then National Assembly president gained control over Venezuelan public companies operating outside the country.

In addition, according to the United States Agency for International Development (USAID) website, since Fiscal Year (FY) 2017 the US has allocated more than $656 million in humanitarian and development assistance to address the Venezuelan crisis. In its FAQ section USAID insists that “no funds are provided directly” to the Guaido administration.

However, an internal memo obtained by The Los Angeles Times in July 2019 said that about $40 million of US aid was specifically allocated to pay for the salaries of the interim government, airfares, good governance training, etc.

To date, the Guaido-led team has failed to present any comprehensive reports on how the money gained from Venezuela’s extraterritorial assets and provided by USAID and other agencies for the country are being spent.

“Guaidó never reported anything about the funds received and that is why more than half of the opposition deputies have abandoned him”, Dr Tortolero elaborates. “The discrepancy between what is said by USAID and what is revealed by the journalistic investigations allows us to see clearly that there is a multifactorial war in Venezuela which directly and criminally affects the Venezuelan people and ordinary American citizens who sees how their taxes are diverted by the political class that rules them”.

Justice in Venezuela ‘Slow but Sure’

On 20 January, National Assembly President Luis Parra announced the creation of a special commission that will supervise an investigation into the use of the alleged humanitarian aid funds sent to the Venezuelan opposition by USAID.

In a January interview with the Diário do Centro do Mundo Parra expressed concerns that Guaido’s management of Venezuela’s public companies abroad also raises suspicions of potentially massive misappropriations, referring, in particular to Colombia-based PDVSA’s Monomeros and US-based Citgo.

“In Venezuela, justice is slow, but sure”, Dr Tortolero underscores. “Guaido is facing an ordeal of lawsuits and accusations from the justice system and from people cheated by his promises, for which he will soon have to pay. Remember that, in our legislation, criminal offenses against the ‘good of the community’ (‘cosa pública’) have no statute of limitations, which means that justice will take its time and every day there will be more crimes added to the judicial process that corresponds to Guaidó for his acts.”

According to the former ambassador, there is enough evidence of Guaido and his associates’ corruption and there is no doubt that the state will continue investigations into them.

“In the meantime, the governments of the region that threw their weight behind him and the opposition figures who believed that he could take power by assault, will continue to withdraw their support from him, which is evidenced in diminished public response to his calls for marches, meetings and rallies”, the professor says.

Why Patriots Should Continue to Stand by Maduro

According to Dr Tortolero, the figure of Guaido personifies “an opposition without leadership, without a national project, which embraced the signs and symbols of the supposed supremacy of the US Empire over the rest of the people of the world.”

“The character representing the self-proclaimed President Guaido is ‘made in USA'”, the former ambassador opines. “He greets people like Obama; he dresses like a gringo and even poses in front of the camera to obtain graphic images which would demonstrate his ‘heroism'”.

However, in reality, Guaido is “a politician of little importance, with no coherence in his actions, who tried to cause chaos to overthrow the Bolivarian government, and the only thing he can achieve is to pulverise the opposition that followed him”, the diplomat highlights.

He notes that the self-proclaimed president pales into insignificance when compared to the legitimate leader of the country, Nicolas Maduro.

“If it were not for the strong will of President Maduro and the team of patriots who loyally accompany him in all actions of defense of the Bolivarian State of Law and Justice, we would certainly be in chaos”, Dr Tortolero underscores. “It is not a matter of boosting the president’s ego, making odes to him, flattering his power and sinning as a flatterer, it is, on the contrary, recognising in him the values of our Venezuelanity and the expression of our strong will to remain free. That is why the call is for tactical unity with Commander in Chief Nicolás Maduro Moros, who will undoubtedly continue to lead us on the path of victory. Juan Guaido and the right wing that supports him are defeated, Trump failed with this [coup] attempt and we will continue to overcome the difficulties”.

Alan Dantas, a Brazilian journalist and editor of Dossier Sul contributed to this article.