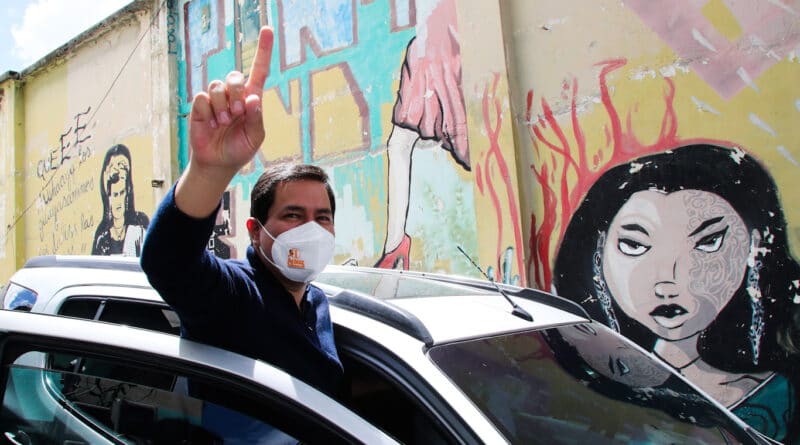 Ecuador is just weeks away from becoming the latest Latin American nation to move away from the IMF and United States and elect a strongly progressive, anti-imperialist government.

If the country’s polls are to be believed, Ecuador is set to become the latest Latin American nation to move away from the United States and elect a strongly progressive, anti-imperialist government. Successive public opinion studies have shown Andrés Arauz of the Unión por la Esperanza coalition holding a commanding lead over his rivals, with somesuggesting he may receive double the votes of his nearest challenger.

In 2018, Mexico voted in its first leftist president in decades. One year later, Argentina returned to progressive hands with the election of Alberto Fernández. Perhaps most remarkably of all, Bolivians managed to turn back the U.S.-backed coup against Evo Morales last year, electingMorales’ finance minister, Luis Arce in October. Added to that are the failed attempts by the Trump administration to dislodge socialist governments in Venezuela and Nicaragua. Meanwhile, far-right Brazilian president Jair Bolsonaro is currently under fire from all sides for his handling of the COVID-19 crisis and has his popularity plunge.

The youthful Arauz is an economist by trade, and a disciple of Rafael Correa, president of Ecuador from 2007 to 2017 and the only Ecuadorian leader in modern history to be re-elected. Arauz, still only 35-years-old, served as Minister of Knowledge and Human Talent at the tail end of the Correa administration and initially wanted to select the former president as his running mate. However, Correa was banned from politics by a court presided over by his rival and current president, Lenín Moreno. He now lives in exile in Belgium, the country of his wife’s birth.

RELATED CONTENT: Elections in Ecuador: A Road Plagued by Unknowns

Correa, still a popular figure inside the country, reduced poverty by 38% and extreme poverty by 47%, while doubling social spending, particularly in education, health, and housing. He was able to do this by defaulting on odious debt, ignoring mainstream economists’ advice to keep taxes on the wealthy low and increasing the government’s share of the country’s oil revenues from 13% to 87% — much to the chagrin of foreign energy corporations.

Correa was also part of a continent-wide move to the left, a wave of progressive, anti-imperialist presidents elected in the time frame, a movement that included Lula da Silva in Brazil, Evo Morales in Bolivia, Hugo Chavez in Venezuela, and Néstor Kirchner in Argentina. Under Correa’s leadership, Ecuador expelled the United States military from the country, insisting they could only return if they granted his country a base in Florida. He also offered asylum to Western dissidents like Julian Assange.

His vice-president, Lenín Moreno was elected in 2017 on a promise to carry on his legacy. Almost immediately, however, Moreno performed a 180-degree turn on policy, pulling Ecuador out of a number of regional alliances with other progressive anti-imperialist countries and renewing close ties to the U.S. It wasn’t long before poverty and inequality in Ecuador began to rise and Moreno was agreeing to substantial loans from the International Monetary Fund (IMF), reversing Correa’s oil policy and opening the country to foreign exploitation once more. At the same time as this was happening, the left appeared to be waning across the region. In 2016, Brazilian President Dilma Rousseff of the Workers’ Party was impeached, a chain of events that eventually led to Bolsonaro’s rise. Meanwhile, conservative billionaire Sebastian Piñera won Chile’s 2017 presidential election.

Arauz has promised to reverse Moreno’s spending cuts and cease business with the IMF. “We don’t see any sense in continuing with the current programme the IMF has with the Moreno government,” he told the Financial Times. “Firstly because the quantity of resources is too small and secondly because the conditionality associated with it is absolutely counter-productive for Ecuador’s growth and development needs.” Instead, he will increase public spending to counter the negative effects of the pandemic, raise taxes on the wealthy and increase capital controls on rich individuals taking their money out of the country. If foreign capital is necessary, he has stated he will negotiate with development banks in China.

Ecuador was hit extremely hard by the coronavirus, in part because of Moreno’s decision (encouraged by Washington) to expel around 400 Cuban doctors on the eve of the pandemic. Some opinion polls have found the current president’s popularity to lie in the single digits.

Economic issues are the primary concern for voters in this election, with 32% identifying poverty and 25% unemployment as their key concerns. Ecuador’s poverty rate jumped from 25.7% in December 2019 to 58.2% in June 2020, with extreme poverty quadrupling over the same period.

Most polls identify Arauz’s closest challenger as Guillermo Lasso, a 65-year-old banker, and former Coca-Cola executive popular with the country’s wealthier class. An anti-communist, he was a member of the right-wing Christian group Opus Dei and came second in the 2017 presidential election, running on a neoliberal platform. However, in recent weeks, Lasso has been fading, and some polls show 51-year-old indigenous leader Yaku Pérez in second. Pérez came to prominence in the nationwide protests against Moreno’s austerity measures in 2019 but has also distanced himself from Correa and socialism.

“Arauz will win unless they steal it from him,” wrote Professor Steve Ellner, managing editor of the journal Latin American Perspectives. “After all, Correa had a 60% favorable rating when he left office. Moreno is completely discredited, and Lasso has been around too long to be considered a new face for business in politics — and in addition is associated with global capital.”

However, the left has been under considerable pressure during the campaign, not least the banning of Correa from holding office. 10,000 Ecuadorians who live in Venezuela, generally considered to be a progressive group, are in the dark about whether they will be allowed to participate, despite the fact that voting is mandatory for all citizens.

The 2010s were a dark decade for the continent’s left-wing groups. However, a victory in Ecuador would underscore the dawning of a new era in the region the United States calls its “backyard.”