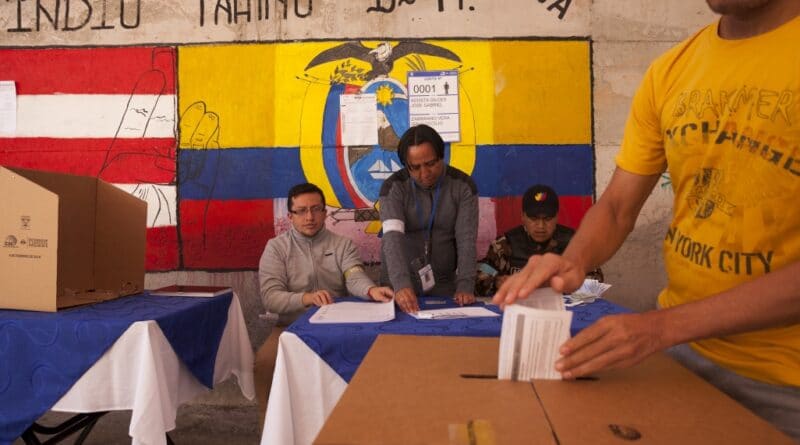 The Ecuadorian people have an appointment with the polls. Next February 7th, this South American country will elect a new president, within a national and global framework impacted by the COVID-19 pandemic and a presidency, administered by Lenín Moreno with 90% citizen disapproval and population that according to data from polling companies, 40% have not decided their vote.

With 3 weeks to go before scheduled elections, a new poll shows that leftist candidate Andrés Arauz continues to lead in voter's intention, with a reported 28.64%. He is followed by banker Guillermo Lasso with 25.01% and Yaku Pérez with 12.25%. #Elecciones2021Ec pic.twitter.com/Ovrj0icsGO

These elections are presented with a record number of candidates (16) and are considered the most turbulent since the return to democracy in Ecuador in 1979. This situation is the result of three fundamental facts that have been resolved, but which have left the political waters in this central South American country in turmoil: former President Rafael Correa’s disqualified from participating in the elections. Secondly, the possibility that the formula formed by Andrés Arauz Galarza and Carlos Rabascall of the Union for Hope Movement (UNES), supported by former President Correa, could be legally blocked in its aspirations to compete, added to the accusations against the ultra-right-wing conservative alliance CREO-PSC, The CNE’s decision to exclude the Social Justice Movement, formed by businessman Álvaro Noboa and Gino Cornejo, from the presidential ballot, was finally a decision full of controversy (2) and, according to Ecuadorian political analysis, a consensus was reached on the idea that it was the only one capable of strongly opposing the Arauz-Rabascall binomial.

In this scenario, the United States, in spite of having its own enormous internal political difficulties, has significantly increased the pressure on those Latin American states whose progressive wing leaders attempted and are attempting to build a more sovereign domestic and foreign policy away from Washington’s negative influences. These include Cuba, Venezuela, Bolivia and Nicaragua, among others, which have been subjected to maximum pressure by US administrations. In the case of the United States regime, led by the retiring President Donald Trump, it has provided the current Ecuadorian authorities with the opportunity to establish an alliance of mutual benefit. A government presided by Lenín Moreno, who helped to arrest the founder of Wikileaks, Julian Assange, at the Embassy of Ecuador in London in exchange for laundering Moreno’s financial crimes, both locally and the millions of dollars deposited by him and family front men and partners in tax havens confirming his policy of taking one step forward for his own benefit and two steps backward to the detriment of Ecuador.

The protection given to Moreno by Washington is the same given to the right-wing candidate Guillermo Lasso, businessman and owner of financial holdings, among them the Banco Guayaquil whose main income is invested in real estate companies, trusts and off-shore companies, which allows him to avoid tax obligations and makes possible the free extraction of capital. It is the paradox of candidates like this banker, plagued by high-flown speeches of defense of the country and endowed with nationalist sentiment, who seek financial protection beyond their national borders. This situation of deposits in tax havens would have served, by itself, to impede Lasso’s candidacy but, as Washington’s candidate, he has all the armor that said country grants its unconditional and unprincipled servants.

It is obscene that the presidency of Ecuador is being discussed with a Guillermo Lasso who is also the founder of 49 off-shore companies located mainly in the Cayman Islands where the group of Andean Investment companies stands out, whose capital increased from one million dollars in 1999 to 31 million dollars in 2001. In Panama, it also has funds deposited under the name of companies such as Corporation Multibg, Banish Holding SA, Brotgers Investment Ltda. If one moves to the United States, and specifically the State of Florida, where right-wing politicians escape from progressive governments and take advantage of the financial benefits provided by the United States, Guillermo Lasso, his sister, his children, other relatives and front men, have registered 29 companies in this state alone under the logo of “Nora” and “Malena”, of which fifteen companies of the Nora group: Investment LLC, Investment Dos LLC, Investment Doce LLC and some of the Malena group: Uno LLC, US LLC, have a real estate patrimony that exceeds 23 million dollars.

The accusations against Lasso are of greater caliber than those against the current president, the converted Lenin Moreno, who is syndicated as owner of off-shore accounts where he also links part of his family, such as his brother Edwin Moreno. Before the Anti-Corruption Prosecutor’s Office in Madrid, Lenín Moreno was accused by Deputy Ronny Aleaga, of the Citizens’ Revolution Party, of former President Rafael Correa, of having committed “possible crimes such as illicit association, money laundering, bribery and fraud”.  Aleaga’s complaint is related to the opening of a company in the tax haven of Belize with the name of the off shore company INA Investment, in honor of the three daughters of the president: Irina, Cristina and Karina, which would have generated an illicit enrichment, which would include a luxurious mansion in the city of Alicante Spain. All this was carried out in the name of Lenín Moreno by his brother, Edwin Moreno Garcés, who would have acted as a front man.

The outlook for February 7 is still uncertain, with a strong campaign against Correa, in which, despite being disqualified, Rafael Correa’s influence is felt, drawing a parallel with Evo Morales in Bolivia, who significantly influenced the MAS candidate who was his former Minister of Economy, Luis Arce Catacora, who triumphed by a wide margin against the forces of the Bolivian right. In the case of Ecuador, Andrés Arauz was also Rafael Correa’s Minister of Economy and despite “still having little relevance at the regional level however, he is known in his country, where he was Correa’s minister. He also has a broad academic background and is currently completing a doctorate in economics at the prestigious Universidad Nacional Autónoma de México (UNAM). He is a professor, not suspected of having committed acts of corruption”. The figure of Correa awakens love and hate without intermediaries and these days the NEC itself determined that all publicity images of UNES should be sacred to the politically disqualified ex-president.

"We live under a dictatorship! Democracy doesn't exist in Ecuador!"

On Sunday, supporters of the Arauz-Rabascall presidential ticket were targeted by the national police during their weekly gathering outside the presidential palace. pic.twitter.com/kqGr825jwV

Ecuador has enormous challenges that will be part of the baggage that the next government will have to carry after the failures of Moreno’s government to solve them or fight against them. Such is the case of the fight against the COVID-19 pandemic, which has generated a health catastrophe, not only because of the scarce role of the state in the fight against this scourge, but also because of statistics that show a scarce number of mechanical ventilators, the failure of containment policies, the lack of hospital beds, and the adoption of measures that imply a strong brake on the country’s economic activity. Arauz himself was infected by COVID-19.

Andrés Arauz announced he has already negotiated the purchase of #COVID19 vaccines from Argentina, guaranteeing that mass vaccinations will begin on inauguration day. #DebatePresidencial2021 (1/2) pic.twitter.com/y2hwnsL4TO

Andrés Arauz spoke about the need for regional integration in Latin America, saying that the region could have already secured hundreds of millions of doses of the #COVID19 vaccine if organizations like UNASUR hadn't been dismantled by neoliberal forces. #DebatePresidencial2021 pic.twitter.com/IFEOsxfQbr

Pablo José Irrurrialde, director of the academic research platform Centro de Derechos Económicos y Sociales (CIDES) in Quito, has an interesting opinion on a series of points that I fully share and that define an electoral campaign strained by the COVID-19 and the attacks on the political parties “I note three political particularities in the current election. The first is the general disenchantment with electoral politics; in fact, one month before the election, between 40% and 50% of society has not yet decided to vote. Secondly, the elections are marked by the banning of the Citizen’s Revolution movement. There is a notorious legal persecution and a notable media siege against Correa; moreover, all the candidates have coincided in persistently attacking Andrés Arauz. Thirdly, the election is marked by the social explosion of October 2019 and, given the prominence of the indigenous movement in that uprising, for the first time the Pachakutik movement is an important electoral option with its President Yaku Pérez. Nor can we ignore the important role that the figure of Xavier Herbaz of the Democratic Left has been acquiring. Both groups have more similarities than differences, but they tend not to unite on the basis of interests, personal quarrels and not the good of the country”.

The Ecuadorian political scenario, in spite of the 16 disputed options, continues to be encased in the old dispute between Correa and its antithesis, still organized by the Correa-Anti-Correa enclave, and where a great part of the contenders throw their darts against the Arauz-Rabascall binomial and where the Correa surname continues to come up again and again. The challenge of correismo is to triumph in the first round, on pain of seeing a ballotage with a unified opinion shouting in unison “everyone against correismo”. As well as winning in the first round, one should win by a wide margin to avoid Lenín Moreno and his people making the usual accusations of fraud or contesting that victory under the most dissimilar arguments.

And I speak of a united opposition in spite of the fact that the Pachakutik indigenous movement seems to be closer to the positions of Correa’s movement. However, Iturralde himself explains why the union has not been achieved with this force, which would allow us to believe in a triumph without any discussion: “The union was not possible because, first, during the last decade the commodity boom generated an exacerbation of the extractive economic model, to which Correa adhered, and which also precipitated clashes and conflicts between the State and the social movements. But, secondly, there is a more historical and profound reason: the plurinational project of the indigenous peoples has a different view of the country from the national and popular matrix, which today represents correism. Indigenism is not only presented as anti-neoliberal, but as an anti-colonial project”. Despite this pessimism, there are some signs that point to some kind of rapprochement, which allows us to think of a strategic alliance. For the good of Ecuador and South America, such a move would be of enormous importance.

The analyses of correism and those consulted by this chronicler argue that the position of the Ecuadorian indigenous population (as happened under the government of Rafael Correa) could begin to improve again, seek effective and core solutions to their social problems, as well as the issue of political representation in power, including issues of belief, which foreshadows that the Republic of Ecuador would try to return to a path of stability and progressive development that under Lenin Moreno suffered a process of incapacitation, to get the country moving, to lift it from its knees, which beyond motor difficulties, plunged the country into a moral crisis. For this reason, a national mobilization against Moreno and his harmful work for the country has been called for January 28, which includes protests over the issue of pensions and the idea of increasing the age of retirement and opposing the eventual privatization of strategic areas of the state, among others, oil, telecommunications, mining, and the electrical companies.