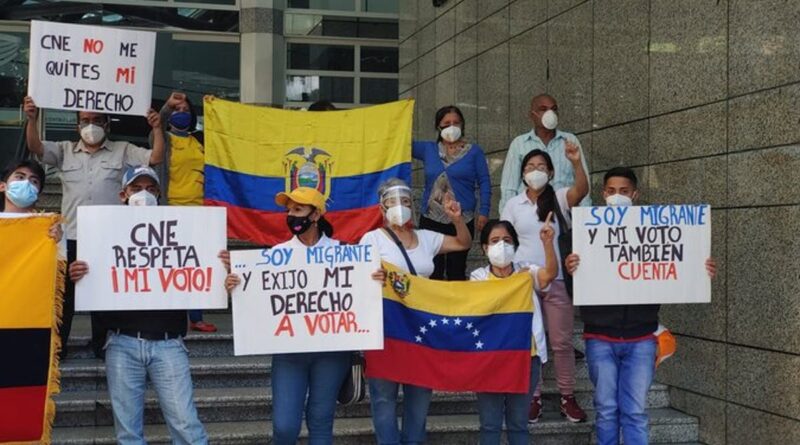 The Ecuadorian community in Caracas on Friday delivered a letter of protest to the consular authorities of the Government of Lenín Moreno for what they consider impediments to exercise their right to vote in the next presidential elections on February 7.

The protesters denounce that Ecuador has not advanced the process to guarantee the right to vote of the migrant community of Ecuador in Venezuela, which includes training, providing information, and rental of the necessary premises to carry out the electoral event.

RELATED CONTENT: Elections in Ecuador: A Road Plagued by Unknowns

These constituents represents about 10 thousand registered voters in Venezuela. The community denounced the delay in the process of setting up the voting tables, for example, and lack of information about the elections.

The campaign team of candidate Andrés Arauz—endorsed by former President Rafael Correa—had warned that the National Electoral Council (CNE) of Ecuador intended to prevent the vote of Ecuadorians in Venezuela, claiming that there was no way to send the necessary resources to Venezuela.

About one-third of the migrant Ecuadorian electorate in Latin America resides in Venezuela, and they are largely correísta, according to Arauz’s team, the Union for Hope (UNES). For this reason they consider impediments to the voting process as maneuvers designed to weaken Arauz’s showing.

Ecuadorians are summoned to elect a president on February 7, and the coalition headed by Andrés Arauz are leading all candidates in the polls.

Venezuela, by contrast, during the 2013 presidential elections, with its consulate in Miami closed because of the Obama administration’s attacks on then President Chavez, launched a massive operation to guarantee the vote of Venezuelans living in the state of Florida, despite the fact that the vast majority of them traditionally vote against Chavismo.

Featured image: There are about 10 thousand registered Ecuadorian voters in Venezuela who denounced the delay in the process of installation of voting tables, and the lack of information for the February 7 presidential elections. | Photo: Twitter/@LeonelTeleSUR.