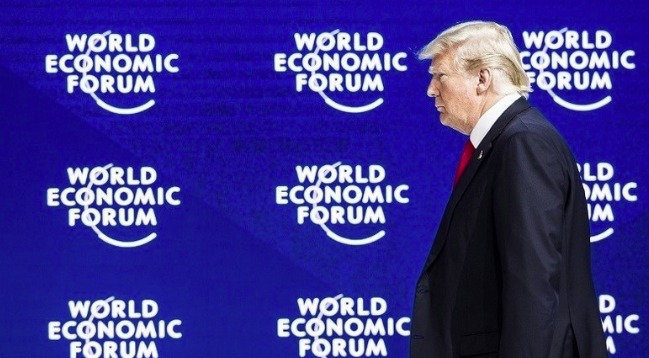 It’s difficult to keep a straight face when reading about the World Economic Forum’s (WEF) post-COVID-19 plans, ambitiously labelled as The Great Reset. Who can trust the WEF’s intentions when their agenda employs such thoroughly discredited poster boys as Iván Duque, Paul Kagame and Benjamin Netanyahu?

The Switzerland-based WEF, composed of a thousand of the world’s wealthiest companies, plays a leading role in forming international economic policy, promising to improve the state of the world “by engaging business, political, academic, and other leaders of society to shape global, regional and industry agendas.” As the lead instigators of the much talked-about Great Reset, their influence is undeniable. When WEF claims that “moral and intellectual integrity is at the heart of everything it does,” it would appear that they’re completely ignorant of world opinion.

“Duque, Kagame and Netanyahu: How to Harness Digital Tech After the Pandemic,” reads a bold WEF headline summarizing the results of a recent WEF convention. One wonders if the WEF could have chosen a more corrupt trio of mass murderers alive today to present as models for the technocratic elite.

Colombia’s Institute of Studies for Development and Peace (Indepaz) recently published their report of the body count under Iván Duque’s reign of terror, demonstrating that 692 social leaders have been murdered in Colombia since his term began in August 2018. Meanwhile the United Nations (UN) stated that during 2020, “Colombia has documented 66 massacres, in which 255 people were murdered, in 18 departments. In addition, the Office has received information on the murder of 120 human rights leaders in the last year alone,” and pointed out that the numbers are probably higher.

“I call on the Colombian authorities to take stronger and much more effective action to protect the population from this appalling and pervasive violence,” added UN Human Rights High Commissioner Michelle Bachelet.

Close US ally Duque has presided over this killing spree by Colombia’s paramilitary and military groups working in close conjunction. The US provided $330 million to Colombian police and military in 2020 alone, reported the Washington Office on Latin America (WOLA). Over 2,500 military officials face charges including crimes against humanity before a Colombian war crimes tribunal, postponed by the pandemic.

While eliminating land defenders, community leaders and Indigenous people, Duque has opened up the country’s most pristine environments to resource extraction, encouraged fracking, and dismantled protection of natural reserves. Duque’s economic policies are directly linked to the systematic assassination of those most harmed by them. In addition, over 40,000 Colombians have died as a result of the government’s mishandling of the pandemic. None of these staggering statistics are a secret — anyone with a more than cursory interest in world news is aware of these reports.

Although his crimes were conveniently overshadowed by the portrayal of the Rwandan genocide in Hollywood films, Kagame and his Ugandan-backed RPF armed forces were directly responsible for murdering hundreds of thousands of Rwandans, and played the critical role in igniting the genocide with their invasion of Rwanda in 1990.

After shooting down the airplane carrying Rwanda’s President Juvénal Habyarimana, Kagame took control of the country and, with the backing of the US and the “international community,” waged a war of mass murder and incarceration of monumental proportions. After attending the elite Fort Leavenworth military academy in Kansas, USA, Kagame, with the help of Ugandan dictator Yoweri Museveni and his billions in US military funding, built an army and invaded Rwanda in October 1990.

“The genocide was a part of the dynamic of the civil war and would not have happened without the RPF’s invasions,” writes Justin Podur in America’s Wars on Democracy in Rwanda and the DR Congo. “Kagame’s forces killed, in organized massacres, 40,000 people from April to July 1994 and another 150,000 people from July 1995 to April 1995, according to reports commissioned by the UN.”¹

Following in the example of his US-backers, Kagame imprisoned any survivors who opposed his dictatorship. “Upon coming to power Kagame created a hellish prison system for over 130,000,” details Podur, “in which thousands died of starvation and preventable disease, while also using the accusation of genocide as a way of getting land or property for his Ugandan RPF returnees.”²

Accounts of Kagame’s prisons are truly the stuff of nightmares. Thousands of inmates were crammed into prisons built to hold many times fewer. From 1994 to 1996 the prison population quadrupled. “Diseases such as tuberculosis and dysentery spread rapidly,” details ethnographer Carina Tertsakian. “There were stories which sounded as if they were taken from a medieval depiction of hell, but which were all true: prisoners whose feet and legs had to be amputated because they had rotted from standing for hours on end in the filth and stagnant water; prisoners who were too weak or too sick to move and who ended up dying where they lay, trampled on by other prisoners; prisoners who were taken to be buried before they had died; and others who were taken out by soldiers and shot dead.”³

“Whether innocent or guilty, these prisoners are gradually rotting away,” said Rwandan priest Andre Sibomana, author of Hope for Rwanda. “When I say ‘rotting away,’ I mean it literally. At least one UNAMIR officer can testify to that. When he visited Gitarama prison and gave a nice speech to the detainees, one of them ripped his toe off and threw it in his face. After weeks of standing upright, day and night, in the mud, the prisoners’ feet had started decomposing.”⁴

Following his invasion and takeover of Rwanda, Kagame pivoted to Democratic Republic of the Congo (DRC) where RPF and Ugandan forces looted valuable mineral resources and created the deadliest humanitarian crisis of the century, in which 6 million Congolese have perished since the mid ‘90s.

“Having prevented UN action to stop the genocide,” writes Congolese historian Georges Nzongola-Ntalaja, “US policymakers and other major players in world politics feel so guilty with respect to Rwanda that they seem prepared to let the Tutsi-dominated regime there get away with murder. Add to this the seal of approval granted to Museveni and Kagame as two of Africa’s ‘new breed of leaders,’ and you understand why they feel so bold in taking actions such as invading the Congo. No sanctions have been taken against them for their aggression against the sovereignty and territorial integrity of the DRC… On the contrary, and despite their lack of democratic credentials nowadays required of others as conditions for economic assistance, Uganda and Rwanda continue to obtain US foreign aid and loans from the Bretton Woods institutions.”⁵

Kagame has ruled as dictator of Rwanda since appointing himself VP and Minister of Defence in 1994. In August of 2017 he was “elected” to his third seven-year presidential term, receiving an unlikely 99% of the popular vote. With typical reserve, the New York Times referred to him as “among the most repressive” African leaders, describing Kagame as “The Global Elite’s Favorite Strongman.” This is the person chosen to sell the WEF’s Great Reset to the world.

RELATED CONTENT: The Promise of a Shiny “Great Reset” Masks the Terrifying Future we are Entering Into

It would be challenging for any person to reverse the public relations damage inflicted by Duque and Kagame’s endorsement of The Great Reset, and Benjamin Netanyahu is not the one for the job.

In addition to his obvious, widely publicized crimes against the Palestinian people, including his commitment to annexing parts of the West Bank, Netanyahu even faces trouble from Israeli authorities, who in 2019 indicted him for fraud, breach of trust, and accepting bribes. He’s banned from any holding any public office within his own apartheid state, except of course that of Prime Minister.

Pilloried by his own country’s legal system, Netanyahu has also been condemned by the United Nations, who in 2019 accused him of war crimes and crimes against humanity for killing unarmed civilians during the repression of 2018’s Great March of Return. Israel receives US military funding equivalent to over $10 million each day.

“According to the UN investigation, the indiscriminate fire aimed at unarmed civilians by Israeli snipers ‘may constitute war crimes or crimes against humanity,’” wrote Chiara Cruciati. “The death toll has been devastating: more than 250 killed (including 48 children) and more than 26,000 injured, with many permanently disabled, compounded by the fact of being in Gaza, where the health system is already in a state of collapse because of the state of siege and the lack of drugs and electricity. Here, people have to live with just two to four hours of electricity a day.”

In response, Netanyahu accused the UN of “hypocrisy and lies, out of obsessive hatred of Israel,” a formidable and deftly crafted argument sure to convince the billions of concerned citizens of our planet who read the daily news.

Particularly damning is a 2017 survey by Washington-based Pew Research Center, which concluded that Netanyahu beat out Saudi Arabia’s King Salman and Syria’s Assad as “far and away the most reviled leader in the region.”

Conclusion: The Dustbin of History

One can only surmise why the WEF would even mention these three ignominious world leaders in their promotion of The Great Reset, let alone showcase them as leading proponents of a future tech renaissance. A clever act of self-sabotage?

Perhaps Trump, Macron, and Boris Johnson are mentioned so frequently in mainstream media that the WEF thought they’d throw a bone to some benchwarmers? If so, this was a great miscalculation as this trio are all-stars in their own right — hall of famers even — in the bad press department.

Conceivably the most likely explanation, and certainly the most sinister, is that the WEF knows full well that their economic program can only be implemented by force, as capitalists have done for centuries. The WEF is extending a clear threat to civilians, and a clear message to business leaders and politicians: As with all economic decisions taken by the global elite, the deployment of our Great Reset is inevitable. Your opinion is worthless, accept it with submission, or else!

One is reminded of praise heaped on Pinochet, who was lauded as a miracle worker by US economists⁶, or of Bush Sr.’s approval of Mobutu as a leader of “insight and vision,”⁷ accolades that may have given a shot in the arm to industrialists and warmongers of the day, but were quickly shown to be on the wrong side of history.