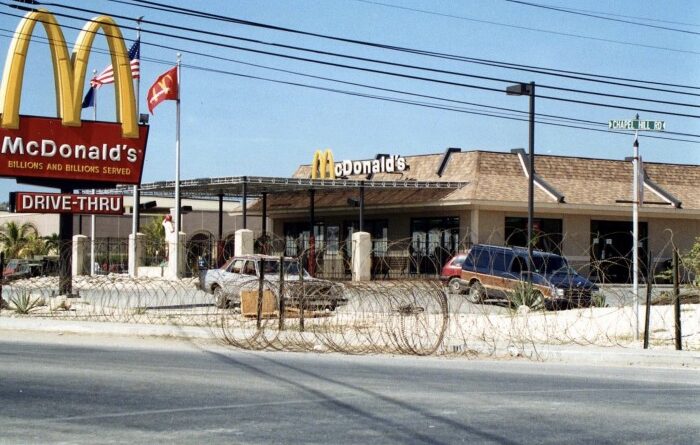 In 1937, the storyteller H.P. Lovecraft wrote this about the direction that capitalism was taking:

Capitalism is dying from internal as well as external causes, and its own leaders and beneficiaries are less and less able to kid themselves…The only avenue of survival for plutocracy is a military and emotional fascism whereby millions of persons will be withdrawn from the industrial arena and placed on a dole or in concentration camps with high sounding patriotic names. That or socialism — take your choice. In the long run it won’t be the New Deal but the mere facts of existence which will be recognized as the real and inevitable slayer of Hooverism.

Since the end of Mussolini-style fascism in Europe, and the subsequent rise of welfare state liberalism throughout the core imperialist countries, the system has again proven itself to be unsustainable. When the welfare state became untenable for the capitalists in the 1970s, they turned to neoliberalism, the economic model designed to foist the costs of capitalism’s crises onto the lower classes. And now that neoliberalism’s self-destructive effects are combining with the climate crisis and the collapse of U.S. imperial hegemony to again make the system unstable, the capitalist world again finds itself heading towards the hellish scenario which Lovecraft described.

And unlike was the case after the depression of the 30s, this crisis won’t end with the U.S. and Europe moving towards increased living standards amid expanded social welfare programs. The inhabitants of the decrepit and increasingly dysfunctional U.S./NATO empire don’t have such a relatively bright future to look forward to this time. In the 21st century, capitalism everywhere can only move closer to a necro-political paradigm of economic deprivation, slave labor, militaristic nationalism, and concentration camps.

Such is reflective of the nature of capitalism, which is to reform in order to preserve itself in the face of crises. As Lovecraft concluded about capitalism’s perpetual relationship with crises, “Nobody is going to ‘destroy the system’ — for it has been destroying itself ever since it evolved out of the old agrarian-handicraft economy a century and a half ago.”

In many countries, governments have been turning to social welfare as a momentary fix for the pandemic, as capitalist states have often done throughout the frequent crises of the last few centuries. But this won’t even necessarily lead to a more generous social welfare state, a fact which reflects the unprecedented magnitude of the crisis capitalism is now facing. And whatever social benefits the people of the imperial core receive will be miniscule compared to all of the poverty, suffering, and violence which the system’s responses to our crises will produce.

The World Bank estimates that already, around 100 million people worldwide have been driven into extreme poverty by events related to the pandemic. By the end of the year, it also estimates, the number could reach as much as 150 million. The additional 120 million or so who are anticipated to also become impoverished by 2030 as a result of climate change represent just a fraction of the masses who will experience severe economic deprivation in the coming years; it’s estimated that half a billion people could ultimately be pushed into poverty by Covid-19. And the global plutocracy is already working to make sure that this is what will happen.

We know this because the International Monetary Fund, the tool which Washington has long used to corral exploited countries into adopting brutally extreme neoliberal policies, is exploiting this year’s crises to vastly accelerate the rise of global inequality. The IMF is using Covid-19 to implement near-permanent austerity measures across the globe, with a total of 81 countries currently being compelled by IMF deals to adopt these types of policies. These neoliberal “solutions” the IMF has put into place consist of mass privatizations, cuts to pensions and the social safety net, and the freezing or cutting of wages.

Will the effects from these policies really be made up for by the attempts at good works projects that capitalist institutions are marketing to the public? The World Economic Forum recently put out a statement about how corporate executives can work with social justice movements to help address the inequities and systemic violence of our times, saying that “There is a need to accelerate both sustainability and social justice agendas — from both employees and consumers.” These kinds of cheery promises about how the good-natured capitalists can unite with activists to solve society’s problems are just a thin smokescreen for the brutal realities of capitalism in the 2020s.

Capitalism won’t lift the tens of millions of newly impoverished people back up, anymore than it will improve the conditions of the billions of people who were living in poverty before the pandemic started. It will leave these people behind while the wealthy retreat into fortified enclaves.

In imperialist neo-colonies like Ecuador and Colombia, the destitution and obscene inequality will continue to grow more blatant, with their police states taking Operation Condor-esque measures to crack down on class struggle. In imperialist countries like the U.S., the U.K., and Australia, the situation will be roughly the same, but with a greater machinery in place to carry out wars and to enact genocide against disfavored groups.

These latter facets are what will be used to establish the kind of fascism which Lovecraft described. We already see it in the endless military budget increases that the U.S. has been undergoing in recent years; in the military buildup against Washington’s rivals; and in the policies of discrimination, deportation, and forced sterilization which are being carried out in response to the influx of refugees.

As this goes on, more and more people will realize that proletarian revolution is a practical necessity. The only alternative is to allow the process of wealth consolidation, ethnic cleansing, and war-produced authoritarianism to continue. Just look at the additional dystopian qualities that our civilization keeps taking on; SpaceX is developing a war rocket that can quickly transport weapons for the U.S. military, global billionaires have collectively gotten $1.5 trillion richer during the pandemic, and so on. These are the kinds of absurdities that we face while capitalism eats itself. These are the truly Lovecraftian horrors that we’ll have to look forward to as the system moves towards its “great reset.”

Featured image:  The McDonald’s at the Guantanamo Bay detention camp