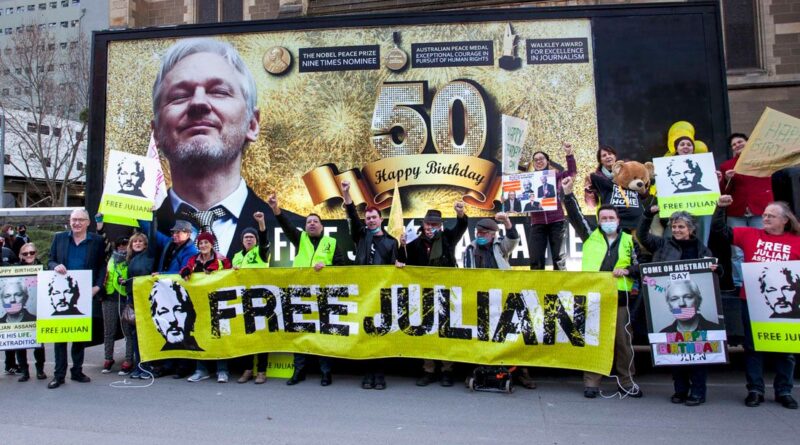 July 6, 2021 (special for OrinocoTribune.com)—On Saturday, July 3, Julian Assange, the most decorated journalist of the present times, who is being persecuted by the United States for exposing its war crimes, turned 50 in Belmarsh Prison in London, United Kingdom, facing possible extradition to the US. Despite an almost complete blackout by mainstream media, which has maligned and smeared Assange over the past ten years, protests and demands for his freedom have never stopped. On his birthday this year, activists and supporters in the US and the UK as well as in his home country Australia and across countries around the world demonstrated in solidarity with Assange, demanding his freedom and an end to the US extradition process and British and Australian complicity.

In London, on July 1, two days before Assange’s birthday, a barge named SS Assange sailed on the Thames, with supporters on board demanding freedom for the journalist. Assange’s partner Stella Morris, who was on the boat, told RT, “Julian won the case in January, and six months later he’s still sitting in Belmarsh Prison—it’s completely unfair and disproportionate.”

“The longer it goes on, the clearer it is that this is a political case, that Julian is innocent and that what has happened here is that journalism is on trial,” she added, referring to the recent revelations of the FBI fabricating evidence using a discredited Icelandic national who in the past had volunteered for Wikileaks.

On Assange’s birthday, Morris was present with her children at another demonstration in Parliament Square in London, which was also attended by journalist and former diplomat Craig Murray, journalist John Pilger, fashion icon Dame Vivienne Westwood, and former Consul of Ecuador in London, Fidel Narváez.

“This is not a legal case, this is a political case,” reiterated Morris in her speech at Parliament Square. “Lies put him in prison, truth and democracy need to get him out,” she asserted, urging everyone to help her to get Assange released.

“We are celebrating [Assange’s birthday] with a heavy heart because, intolerably, he is still jailed… despite the fact his extradition to the United States was denied, despite the fact that he is not convicted of anything at all,” said Craig Murray. John Pilger called Assange’s continued incarceration a “travesty,” while Dame Westwood crushed a birthday cake, symbolizing how Julian Assange’s life is being destroyed in prison.

Supporters of the imprisoned journalist also took the street in front of the British maximum-security prison, demanding his release and no extradition to the US.

In the United States, the Home Run for Julian tour, led by Assange’s father John Shipton and brother Gabriel, was in Washington DC on Saturday, where protesters celebrated Assange’s birthday with songs, cakes and banners in support, in front of the US Justice Department headquarter, reported The Grayzone. The Home Run campaign has passed through various cities in the US in order to raise awareness about the plight of Julian Assange, incarcerated for no crime, with the possibility of a sentence of 175 years in a maximum-security prison hanging over his head.

RELATED CONTENT: Julian Assange is a ‘Journalist of Distinction’ & has to be Set Free, Jeremy Corbyn Tells RT Outside UK’s Belmarsh Prison

“You can only be free if you know stuff; that is essentially the motivation of Julian Assange and Chelsea Manning,” Assange’s father John Shipton, standing in front of the Justice Department building, addressed the gathering. “The understanding in those documents—the Iraq war files, the Afghan war logs, the Guantánamo detainee files, and the cables—the understanding in there has seeped through, over a ten-year period, into the culture… in the United States, in the people.” He put his hope in the people, in the people’s conscience and understanding, for the liberation of his son.

According to comedian, activist, and news presenter Lee Camp, who was at the protest, the main challenge now is not to forget that Julian Assange is in prison. “The goal of our prison system—our prison-industrial complex, as well as what they are doing in Belmarsh—is just to make these people forgotten,” Camp told The Grayzone’s Anya Parampil. “They’re hoping that Assange will just, you know, fade into nothingness and live out his days in a prison cell.”

Leonardo Flores of Code Pink explained that his involvement in the matter started in 2010 with Wikileaks’ release of the US State Department cables. When reading through all the cables regarding Venezuela, his home country, he had realized that “we were right in terms of what the US was doing in Venezuela. We were right in terms of identifying their strategy, which is basically to divide the movement, the Bolivarian Revolution, and to divide the Latin American left as a whole.” Flores also highlighted Julian Assange’s contribution to the world, stating that “there is a huge attempt by the US to control what’s being said, and Assange helped [us] to break free from that.”

The Grayzone’s Ben Norton, also present at the protest, called Assange a “political prisoner of the US global dictatorship,” and drew attention to the similar situations of Venezuelan diplomat Alex Saab and Huawei executive Meng Wangzhou, a Chinese national, arrested and confined respectively in Cape Verde and Canada under US orders and facing extradition to the United States.

In Julian Assange’s own country, Australia, the activist group Australians for Assange drove around in the streets of Melbourne a billboard truck for Assange’s birthday, while various other groups demonstrated in cities across the country, demanding his immediate freedom.

Similar events celebrating Julian Assange’s birthday and demanding an end to his persecution were held by activists in Germany, Italy, Spain, Belgium and other countries in Europe. According to the Candles4Assange movement, solidarity events for Assange were held in at least 53 cities in 21 different countries, including Mexico and Brazil.