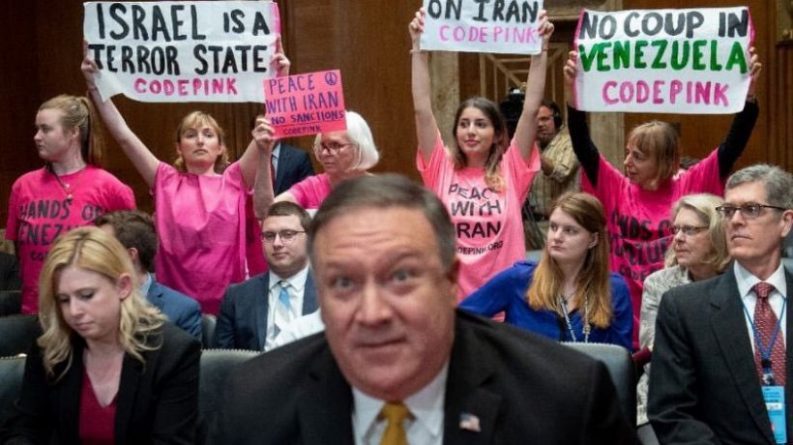 Since the regime change operation began on January 23, a group of activists stood out for appearing in each of the acts where the sovereignty of the country is seriously attacked by officials of the United States government and representatives of Juan Guaidó. With banners and shouts, they have been part of the global call for attention on the consequences of a military intervention in the country.

Their name is Codepink and their last act of support for Venezuela is to protect the inside of the Venezuelan embassy in Washington to prevent the representatives of Guaidó from taking it by force, as they did with the military attaché building in the same city and the Venezuelan consulate in New York. That is why they sleep with blankets on the armchairs of the embassy until the representatives of Guaidó, in collaboration with the United States, desist from the idea of taking the diplomatic seat.

In recent days, the organization also published a statement stating that “a group of US citizens, disgusted with the attempt orchestrated by the United States to overthrow the Venezuelan government, has formed a Colectivo de Protección de la Embajada [Collectives for the Peace] to prevent the embassy from falling into the hands of the unelected opposition.”

WHY DOES CODEPINK DEFEND THE EMBASSY OF VENEZUELA?

While their most striking actions occurred when they broke into the sessions of Congress where Secretary of State Mike Pompeo and his representative for Venezuela, Elliott Abrams, participated, Codepink went viral on Sunday when they projected images of the former president of Hugo Chávez and phrases against a US intervention in Venezuela on the Venezuelan diplomatic headquarters.

RELATED CONTENT : Maduro Denounces Citgo’s Theft by the US Illegally Indebting it For $ 1.3 Billion

According to an article signed by Medea Benjamin, co-founder of Codepink, the defense of the Venezuelan embassy in Washington is carried out in a “work side by side” with the country’s diplomatic staff in the United States. This action is justified on the basis of article 22 of the 1961 Vienna Convention on diplomatic relations, which states that the receiving State “must protect the diplomatic seats of other countries in its territory from any intrusion, disturbance of the peace or impairment of its dignity. ”

According to Benjamin, the Trump Administration flagrantly violated this principle, being one of the few countries that has allowed the diplomatic headquarters of Venezuela abroad to be taken by force, together with Costa Rica.

For this reason, the Embassy Protection Colectivo, as they have been called, hold educational events during the day, such as talks, and hang banners to raise awareness about the effects of other US invasions, while at night they take turns sleeping in the armchairs of the embassy. Among the events convened include seminars on the history of Venezuela, Julian Assange, the consequences of the foreign policy of the United States in Africa, and information on Honduras and El Salvador.

“On April 23, a day before what is expected is the attempted seizure on the part of the representatives of Guaidó, we hope to hold a seminar with the former CIA officer John Kiriakou to talk about the regime change operations of the United States,” said Benjamin who repeatedly stressed to the media that the presence of the group is to discourage any attempt to take over the headquarters.

While this is happening, the collective has a large banner just above the Venezuelan flag that says “end the deadly sanctions,” and two more in the columns of the building that are an “imperial checklist” on how to organize a coup d’etat and one last on the consequences of the interventions of the United States.

Also in the windows, they placed thirty-two signs on the chronology of the last coup attempt, this one led by Juan Guaidó.

ASSAULTS AGAINST CODEPINK AND A BRIEF HISTORY OF THE ORGANIZATION
“Invaders gringo communists do not stop making propaganda in favor of the regime of Nicolás Maduro,” wrote the antichavista media La Patilla, owned by the former owner of Globovisión, Alberto Ravell, after the screening of the “eyes of Chávez” drew attention of the transients who passed through the embassy.

Despite the attempt to equate activists with “invaders”, the reality that the modality of convening people beyond the organization began in 2002 when their first action was a vigil in front of the White House against the war in Iraq. The initiative was joined by a total of ten thousand people in what is considered the first action of the group founded that year.

According to the official website of the organization, Codepink “grew out of a deep desire of a group of American women to prevent the United States from invading Iraq.” In the latter, however, the group has also included men under the principle of “working for peace and social justice”.

In this context, Codepink activists greeted the former Secretary of State of George Bush, Condoleezza Rice, in Congress with their hands painted in blood, which caused them to be expelled from Congress. It is estimated that they were arrested a dozen times for protests against intervention policies.

Currently, their protest topics are the wars in Yemen, the genocide in Palestine, the threats of intervention in Iran and the attacks with drones.

Distinguished with the pink color that characterizes the organization, according to Benjamin every time they go to Congress they are well received by the police to such an extent that one of them once asked them: “Give me a hug now because I may have to arrest you later”.

Benjamin, and the other members of the organization, are faithful representatives of the anti-war social movement that after Vietnam has been revitalized with the failures in Iraq and Afghanistan. The amount of support for his campaign in defense of Venezuela influences the American opinion against the coup against Venezuela.