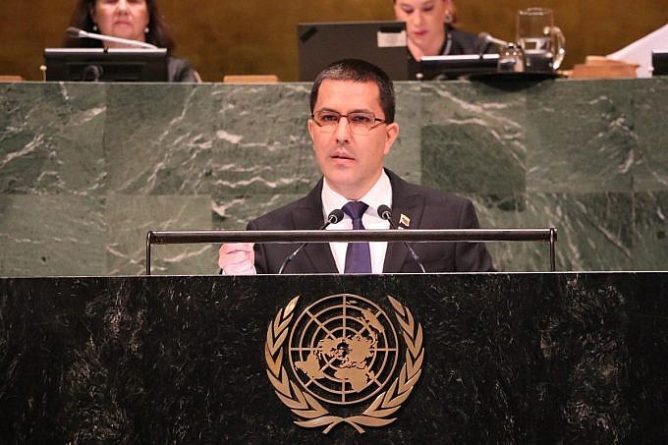 Speaking at the high-level meeting of the General Assembly for the International Day of Multilateralism and Diplomacy for Peace, Venezuelan Foreign Minister Jorge Arreaza recalled that US President Donald Trump used the same room to announce unilateral coercive measures against Venezuela and other countries.

Arreaza denounced the United States on Tuesday for intending to undermine the rights and privileges of his country as a member of the UN, and recalled the numerous hostile actions of Washington.

He recalled that Vice President Mike Pence recently tried to use the Security Council to push unilateral measures and impose the “US dictatorship” in this chamber and give orders to governments in order to expel a member state with  full rights such as Venezuela.

In this way, he stressed, Washington excludes itself from the principles and purposes of the UN, an organization that should not be used to address bilateral issues or to intervene in the affairs of others.

Nor should it be used to illegally designate government representatives, he indicated with respect to the US and other Western powers support of Juan Guaidó, head of a parliament in contempt that proclaimed himself president in charge of Venezuela.

Arreaza highlighted how some want to break multilateralism from pressures and extortion and, in that sense, expressed solidarity with Cuba, a country that, he said, is subject to “resurrected laws” to impose and strengthen the blockade that for 60 years has been imposed by the United States.

In the same way, he reiterated Venezuela’s solidarity with other nations that suffer unilateral sanctions, such as Iran.

“Venezuela is a country that believes in the need for a multicentric world, where the powers are balanced and nobody tries to dominate others. We believe in multilateralism and tolerance,” he said.

The Venezuelan diplomat read the declaration of the Movement of Non-Aligned Countries ( Mnoal ) composed of 120 nations, in which the historic commemoration of the day is celebrated and highlights the relevance of the peoples of the world.

He explained that multilateralism guarantees the principles embodied in the sacred charter of the United Nations and “is the way to promote the values of the organization, to reaffirm the faith of the peoples and to advance in a sustained manner to a lasting peace through the diplomacy .”

“We live in a world that presents multiple and complex threats, with challenges to peace and international security that must be addressed jointly with responsible members of the international community, through multilateralism that allows us to advance together,” Arreaza said.

“The UN is precisely the ultimate expression of multilateralism. It is not a club of friends, but a forum where we can all be represented and coexist under principles such as equality of rights, self-determination and non-intervention,” said the Venezuelan foreign minister.

“That is why Venezuela defends diplomacy for peace,” Arreaza underscored. “In fact, it was Caracas on behalf of the 120 Member States of the Non-Aligned Movement that presented last year the draft resolution to celebrate an International Day of Multilateralism and Diplomacy for Peace,” recalled the foreign minister.

This document should have been put to a vote at the request of the North American delegation, which stated that the establishment of such International Day was “unnecessary”. Only the United States and Israel voted against.

The US delegation did not attend this high-level meeting of the General Assembly, and while several nations condemn their sanctions and unilateral coercive measures, their seat in the room remains empty.