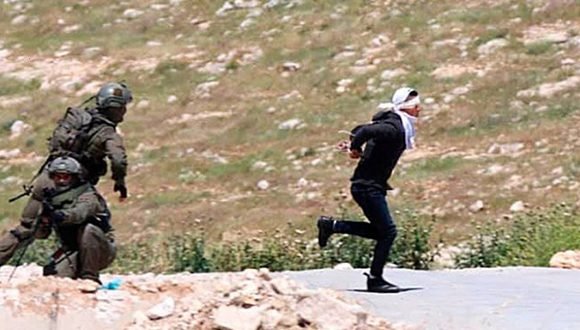 An instant, a few minutes, just a moment that is repeated daily in Palestinian lands under Israeli occupation. The difference is that a Palestinian photographer caught on Thursday (the moment) 15-year-old student, Osama Hajarja, was shot by an Israeli soldier.

The images show the moment in which the boy tries to escape to the roadway – the hands tied to the back, eyes covered by a piece of cloth – while the soldiers undertake the persecution. A video captured moments after the shooting and shows the military of an elite unit of commandos, one of whom carries a sniper rifle, who faced the Palestinians come to help the wounded teenager.

Had it not been for the camera of Mohammad Hmeid, the bullet that Osama received would have remained anonymous in another chapter of the violence that Israel exercises in the Palestinian territories, occupied since 1967.

The images of the moment when a soldier shoots the bound, blindfolded young man went through the Israeli media after the first weekend of the Jewish Passover.

The office of the Israeli army spokesman justifies the action, saying that “the throwing of stones endangered the lives of civilians (Israelis) and soldiers, who responded with riot police and arrested a demonstrator.” The fact is that the teenager had been arrested for participating in a protest in the West Bank against the advance of the occupation of Palestinian lands by settlements of Israeli settlers in Tekoa, southeast of Bethlehem.

“The incident will be investigated,” they say from the Army. But the reality is that it is not an isolated incident, it is part of a true Apartheid imposed by Israel against the Palestinian population.

The policy of occupation that during the last electoral campaign was revived by the main candidate Benjamin Netanyahu, who promised on Sunday the annexation of the Israeli colonies on occupied Palestinian soil.

It was a last-minute call to try to strengthen his position with the ultra-Orthodox, nationalist and far-right, which make up a large part of the parties among which the new parliament will fragment.

Netanyahu is preparing to win the support of a collection of racist, fascist, ultra-orthodox, neoliberal parties, many of which are even more radical fringe groups, such as the so-called Jewish Power that makes open arguments for violence against Arabs and proposes expulsion of the Palestinians.  Announcing that the fifth government of Netanyahu is even more right than the previous ones.

As the historian of Jewish origin Ilan Pappé has shown, the founding of the State of Israel was a “colonial fact” based on the ethnic cleansing of the Palestinian people. Pappé says that “Israel turned Palestine into the biggest prison in the world” based on the occupation and the perpetuation of state terrorism, which he defines as “incremental genocide”. This colonial situation is reinforced with Trump-Netanyahu.