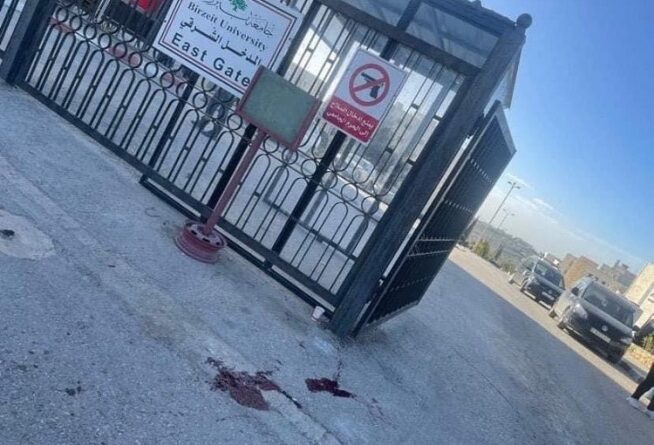 On Monday afternoon, on 10 January 2022, the Israeli Occupying Forces (IOF) raided Birzeit University campus, north of Ramallah, arresting five students in front of the eastern university entrance.Approximately 14 members of the IOF, some with regular uniforms and others from special forces, some of whom were masked, attacked student representatives as they attended a meeting of student unions (political fractions) in Birzeit University. Local sources say that the IOF drove a white windowless van, usually used for moving goods, with a Palestinian registration plate to access the grounds of the university campus,[1] which Al-Haq documented was followed by a 4×4 vehicle that also carried soldiers.

The attack took place at the outskirts of the university campus adjacent to the eastern entrance to the university. The students attempted to flee but were chased by the IOF. One student, Ismail Barghouti tried to climb the closed entrance of the university when he was shot and injured with live ammunition in the thigh. He is currently undergoingtreatment at Talhasharon hospital and is in a stable condition. Four students were arrested and taken to Ofer interrogation center.According to eyewitnesses who reported to Al-Haq, the students were kicked and hit during the arrests. Several gunshots were heard but no other injuries were reported. The IOF arrested Ismail Barghouti, Qassam Nakhleh, Abdel Hafeez Sharbati, Walid Harazneh, and Muhammad Al-Khatib in front of the university’s eastern entrance, amid heavy gunfire.Two students were released after five hours interrogation, while two remain in detention.

Al-Haq strongly condemns the raid on Birzeit University and Israel’s continued violation of its obligations under international law. Birzeit is one of the oldest and largest Palestinian universities in the West Bank. Under Article 50 of the Fourth Geneva Convention, Israel is obliged to “facilitate the proper working of institutions for children”, which includes “institutions and establishments of a social, educational, or medical character”.[2] Yet, students at the University are regularly subjected to intimidation, assault and arbitrary arrest by Israeli soldiers, as the raid on 10 January 2022 demonstrates.[3]

The raid by the IOF to arrest five students at Birzeit University, as a policing operation in occupied territory is governed primarily by the framework of international human rights law. As such, policing activities against civilians during belligerent occupation may never be conducted like hostilities against combatants.[4] The UN Basic Principles on the Use of Force and Firearms by Law Enforcement Officials (Basic Principles) specify that the use of firearms is permissibleonly as an absolute last resort in the case of self-defence or the defence of others against imminent threat of death or serious injury. Further, Article 3 of the Code of Conduct for Law Enforcement Officials stipulates that the use of firearms “is considered an extreme measure” in which “[e]very effort should be made to exclude the use of firearms, especially against children”. The international standards for law enforcement officials are grounded in respect and protection for human dignity, aimed to maintain and uphold the human rights of all persons. By using live ammunition on a university campus attended by around 14,500 students,[5] the risk of critical injury or loss of life to the civilian population far outweighed and was disproportionate to the IOF outcome of securing the arrest of five individual students.

Israel’s continuous attacks against Palestinian universities confirm Israel’s intent to weaken and dismantle education in Palestine. In doing so, Israel, the Occupying Power, is in breach of Article 13 of the International Covenant on Economic, Social and Cultural Rights (ICESCR) which guarantees the right of everyone to education; and Articles 19 and 21 of the International Covenant on Civil and Political Rights (ICCPR) which protect the right to freedom of expression and the right of peaceful assembly. Al-Haq strongly condemns the IOF’s attack that targeted the Birzeit University, along with all other attacks against Palestinian educational institutions and further calls on the international criminal court to treat the attack as an act of persecution against the civilian population.

Accordingly, Al-Haq urgently recommends that the international community, intervene to protect the right of access to education of Palestinians in the occupied territory. Further, Al-Haq calls on the UN Special Rapporteur on the right to education to visit the Occupied Palestinian Territory and examine how the Palestinian right to education is impacted by the occupation. Additionally, Al-Haq calls on the international community and all High Contracting Parties to the Fourth Geneva Convention to fulfill their obligations towards protecting human rights and ensuring the implementation of international humanitarian law.

[2] Commentary to Article 50 of the Fourth Geneva Convention.

[5] According to Birzeit University records 2020.