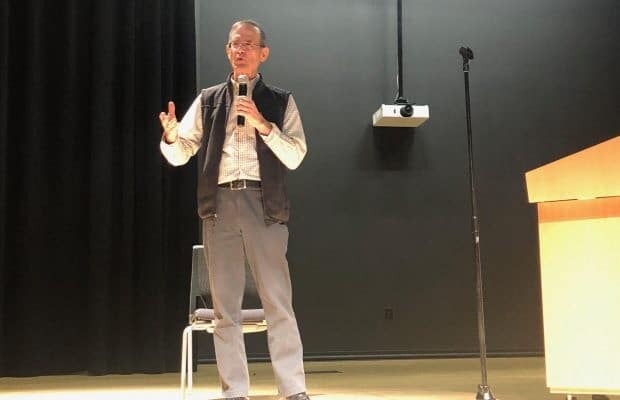 Venezuela may be nearly 3,000 miles away, but speaker Steve Ellner brought the country to the forefront Nov. 15 at UMKC to discuss its challenges under President Nicolás Maduro.

The Association of Latin American Students (ALAS) worked with the Latino Alumni Student Organization (LASO) to invite Ellner to finish his fall speaking tour on the hardships Venezuela is facing.

Dr. Clara Irazabal from the Latinx and Latin American Studies Program at UMKC is a native Venezuelan, and in her 12 years of knowing Ellner, she has come to deeply value his opinion.

“In all these years, I haven’t found a voice that is more truthful or that I can trust as much as the one that Steve offers in the analysis of Venezuelan politics,” said Irazabal.

Ellner recognized his analysis contrasts with the view of Venezuela that has been given by both the United States’ government and media. His analysis has also contrasted with the views of a few Venezuelans who walked out of earlier stops in his tour. Still, Ellner stood by his in-depth approach to an issue he believes not enough people understand both sides of.

“I want to share with you my interpretation of the complexity of the current situation in Venezuela,” said Ellner. “Incidentally, that very word ‘complexity’ goes against the simplistic notions that Venezuela is a failed state and that Maduro should be overthrown. After all, the Trump administration has stated as much.”

Complexity could very well be the theme of the speech that covers from the rise of Hugo Chávez in the 1990s to now, as Venezuela approaches its celebration of 20 years since his election. An elected official serving for such a long amount of time is a foreign concept to Americans and most democratic countries.

“There are only two ways to explain that political success,” said Ellner. “One is what basically the Trump administration is saying, what the opposition is saying, and what most of the mainstream media leaves us to believe: that Venezuela is a dictatorship.”

Ellner provided an alternative to these sources as he educated the audience on the factors that contributed to Venezuela’s state.  Among these were the decline of oil prices, Maduro’s failure to appreciate the importance of market dynamics and U.S. sanctions, especially.

Obama made an executive order in 2015 declaring Venezuela as a threat to U.S. security. The Trump administration has responded similarly by encouraging isolationism with the country and discussing a future military coup. These actions have changed the global attitude towards Venezuela and lead to many countries and companies withdrawing their support from it.

“If you’re the CEO of a U.S. corporation and the president of your nation says that Venezuela is a threat to the national security of your country, you’re going to think twice about maintaining operations in Venezuela,” said Ellner.

In a socio-economic plain so rife with turmoil, it can be hard to see a bright side, if there even is one.

Judy Ancel, president of Cross-Border Network for Justice and Solidarity, reflected on this and a visit to the country nearly 10 years ago.
“I had never been in a country that was so politicized,” Ancel said. “But it was incredible because people knew so much about politics. Yes, it was polarized, but they were engaged.”

Ellner also struggled to see a positive outcome to the country’s plight, but believed there to still be hope.

“The only solution is sitting down, and reaching a consensus with the moderates,” said Ellner. “The road to normalization on both the political front and the economic front is dialogue.”