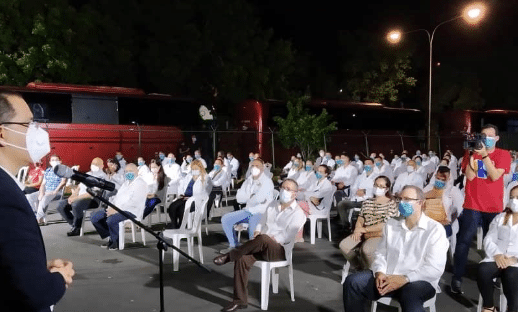 Foreign Minister Jorge Arreaza thanked the 230 Cuban doctors who arrived in Venezuela on Sunday night, August 16; who are added to the health care initiative to combat Covid-19 in Venezuela.

This new contingent joins more than 21 thousand collaborators in health matters that work in Venezuelan territory as part of the existing cooperation agreements between Cuba and Venezuela.

Upon receiving the new contingent of health professionals, Minister Arreaza mentioned how the bilateral solidarity mechanism breaks with the blockade imposed by the United States government against Cuba, Venezuela and any country that appeals to international solidarity.

“It is incredible that the government of the United States intends to sanction those countries that receive Cuban doctors,” he said.

In that sense, he reflected on the double standards that Washington practices in preventing peoples from working together for their own well-being and development.

“The ruling elite that makes war, that sends weapons, that promotes death, violence, that finances terrorism, intends to sanction those governments that take care of their peoples, call Cuba and ask for solidarity and scientific knowledge. That shows us that we are on the right side of history.”

Brotherhood and cooperation
Foreign Minister Jorge Arreaza stressed that in the face of difficulties, Cuba and Venezuela will get closer and closer to find solutions and joint strategies to overcome the obstacles imposed by the US government.

He said that “junctures like this one, of an unexpected, terrible pandemic, allow us to continue deepening those ties and showing US imperialism that nothing and no one can make our peoples separate, our revolutions separate from each other.”

In that sense, he recalled that thanks to the initiative of Hugo Chávez and Fidel Castro, materialized in cooperation agreements, “it is already part of our daily life, of our life, to know that your side, in your neighborhood, in your town, in your village, in your neighborhood, a few meters away there is a Cuban doctor, a coach, a nurse or a collaborator in education missions.”

He added that there are several months of resistance left, while the tests for the application of vaccines against Covid-19 progress and he stressed that until that happens, Venezuelan health professionals have the collaboration of medical personnel from Cuba.

“We count on you doctors, nurses. Receive the gratitude of Venezuela from the depths of our hearts,” he said.

Heroic example
“I lost count of how many millions of Venezuelan lives have been saved thanks to Cuban health personnel,” said Venezuelan Foreign Minister Jorge Arreaza upon receiving the 230 doctors who arrived from the Caribbean island.

He expressed his gratitude on behalf of President Nicolás Maduro and reiterated that there is no award or recognition that values the human contribution that the solidarity and cooperation of Cuba represents, especially in health.

“In Venezuela you are heroes and heroines,” were the words of Foreign Minister Arreaza to the medical staff when he welcomed them.

The event was attended by the Ambassador of the Republic of Cuba in Caracas, Dagoberto Rodríguez, and the Minister for Health of the Bolivarian Republic of Venezuela, Carlos Alvarado.