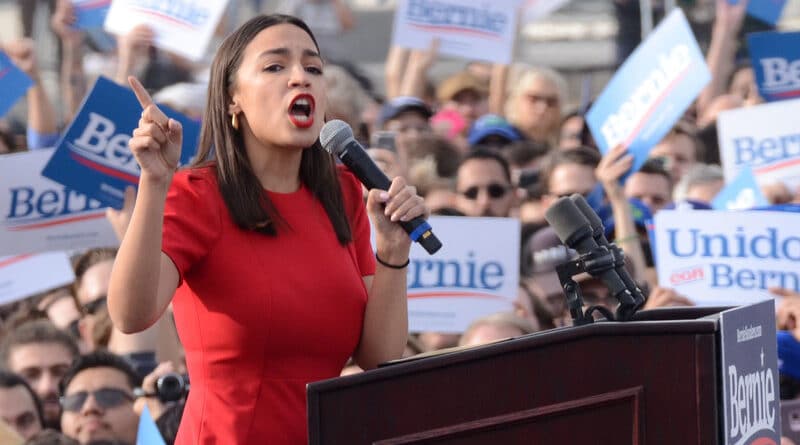 When Alexandria Ocasio-Cortez won an upset primary victory in June 2018, it came as a breath of fresh air for supporters of Palestinian rights.

The month before she unseated a senior member of the Democratic Party, she had expressed her solidarity with unarmed Palestinians being gunned down by Israeli snipers as they protested in the besieged Gaza Strip.

“This is a massacre,” she tweeted on the day Israeli soldiers killed some 60 Palestinians. “I hope my peers have the moral courage to call it such.”

“No state or entity is absolved of mass shootings of protesters. There is no justification,” she asserted. “Democrats can’t be silent about this anymore.”

This is a massacre.

I hope my peers have the moral courage to call it such.

No state or entity is absolved of mass shootings of protesters. There is no justification. Palestinian people deserve basic human dignity, as anyone else.

Democrats can’t be silent about this anymore. https://t.co/wJGATOtDsR

What a difference three years and two elections to Congress make.On 1 April, Ocasio-Cortez did an online event with the Jewish Community Relations Council of New York, her first meeting with the Israel lobby group.

The event might have gone unnoticed, but for a tweet on Wednesday from left-wing activist and journalist Ryan Wentz, gently criticizing her “incredibly underwhelming” response to a question about “peace both between Israelis and Palestinians.”

On April 1, @AOC did a livestream with Michael Miller, the head of the Jewish Community Relations Council of New York. She was asked about “peace between Israelis and Palestinians.”

Her response was incredibly underwhelming, to say the very least: pic.twitter.com/qHdwTy5pVO

Ocasio-Cortez’s vacuous word salad of an answer – which completely failed to address Israel’s violence against Palestinians or call for accountability – went viral, with thousands of responses and retweets mocking it.

I'm incredibly impressed with @AOC's Obama-like ability to fill large amounts of time with words while saying absolutely nothing. I challenge anyone to tell me what she just said. https://t.co/hIkWTNR5Rp

In a deeply disturbing development, Wentz was tracked down at his Los Angeles home on Thursday by California state police after he posted the video. They were acting at the behest of the US Capitol Police.

Wentz told the publication The Grayzone, “The officers said, ‘We got a warning about a sitting member of Congress. And it was because of your tweet, which tagged them in it.’ And then they just wouldn’t back down from this accusation that I threatened to kill her.”

Ocasio-Cortez’s office has denied reporting Wentz’s tweet to the Capitol Police, though the episode is raising alarms about increasing police-state style censorship of US online discourse. Ocasio-Cortez has been in the forefront of calls for online speech-policing and censorship.

(1/X) I’m really shaken up right now. I was just visited by two plainclothes police officers from California Highway Patrol at my home. They said they came here on behalf of the Capitol Police and accused me of threatening @AOC on Twitter yesterday. This is provably false. pic.twitter.com/NGR8KViy93

AOC praises Israel
While the segment of Ocasio-Cortez’s comments shared by Wentz attracted widespread derision, there are other troubling parts of her discussion with JCRC-NY that have escaped attention.

JCRC-NY CEO Michael S. Miller used the interview with Ocasio-Cortez to advance the claim that “Israel is a leader in environmental sustainability, especially in water conservation, reforesting and solar power.”

Miller spoke about seeing an Israeli aid project in Ocasio-Cortez’s ancestral homeland Puerto Rico, a country she calls “colonized” by the United States and whose self-determination she champions.

“Might there be components of the Green New Deal in New York or around the world where Israeli ecological expertise could be employed to upscale real solutions and address the climate crisis?” Miller asked the Congress member.

Watch: At a 1 April event with an Israel lobby group, @AOC echoes Israel's greenwashing propaganda that it uses to cover up its theft of Palestinian land. My article: https://t.co/GMdJPqG6vk pic.twitter.com/Kna9ev544f

Ocasio-Cortez, the author of the Green New Deal, ought to have seized this opportunity to point out the striking parallelsbetween Puerto Rico’s colonization by the United States and Palestine’s US-backed colonization by Israel.

She could also have denounced Israel’s greenwashing propaganda, which aims to falsely paint it as an exemplary environmental steward, often as a cover for ethnic cleansing and theft of even more Palestinian land.

Instead, she answered, “Absolutely,” before going on to praise “Israel’s technology around wastewater circulation.”

Those technological marvels will come as news to two million Palestinians caged by Israel in Gaza, where due to Israel’s wars and blockade, 97 percent of water is undrinkable and conditions are like living in a septic tank.

While Ocasio-Cortez’s dismal performance during the JCRC-NY event sparked widespread ridicule, a basic question is why a self-proclaimed champion of human rights and racial justice agreed to participate at all.

Six UN Special Rapporteurs released an allegation letter sent to the State of Israel on the situation of access to safe and drinking water in the #GazaStrip, as Gaza registers a new spike of COVID-19 cases.

Justifying Gaza massacre
JCRC-NY is an Israel lobby group whose activities include organizing junkets to Israel for politicians and community leaders.

It uses these junkets to build support and influence to advance its agenda, which includes justifying Israel’s brutal violence against Palestinians.

It disseminates propaganda attacking the Palestine solidarity movement, including recommendations from Israel’s Reut Institute think tank on how to smear and sabotage the nonviolent boycott, divestment and sanctions (BDS) movement.

In Ocasio-Cortez’s defense, she appears never actually to have endorsed the BDS movement, unlike her fellow Squad members Ilhan Omar and Rashida Tlaib.

JCRC-NY promotes a host of far-right anti-Palestinian organizations, including CAMERA, HonestReporting, Palestinian Media Watch and Our Soldiers Speak, a propaganda organization for the Israeli military.

It also promotes the Israel on Campus Coalition, a group shown to collude secretly with the Israeli government to surveil and smear American college students and educators who organize in support of Palestinian rights.

The CEO of JCRC-NY – the same Michael S. Miller who interviewed Ocasio-Cortez – has attacked the New York chapter of Democratic Socialists of America, of which Ocasio-Cortez is a “superstar” member.

According to Miller, the group was anti-Semitic because it asked candidates seeking its endorsement to pledge not to go on the kind of propaganda junkets to Israel that lobby groups like JCRC-NY organize.

(Notably, even NYC-DSA had to distance itself from Ocasio-Cortez following her 2018 endorsement of now fullydiscredited New York Governor Andrew Cuomo.)

The depravity of JCRC-NY’s anti-Palestinian racism can be gauged by an action alert it issued in support of Israel’s 2014 war on Gaza.

During 51 days of merciless bombardment, Israel killed more than 2,200 Palestinians including 550 children – an average of 11 children per day.

Entire families were obliterated in their homes.

The lobby group’s efforts to justify the massacre in real-time included hosting briefings with senior Israeli military officers and officials.

“Not the expert”
Ocasio-Cortez’s path into the arms of the JCRC-NY – and who knows which Israel lobby group might be next – has been discernible from the start, even if it has had a few detours on the way.

Within weeks of her stunning June 2018 primary win, she already showed signs of buckling under pro-Israel pressure.

When challenged on PBS about her description of Israel’s mass killings of unarmed Palestinians as a “massacre,” she replied defensively: “Well, I believe absolutely in Israel’s right to exist. I am a proponent of the two-state solution.”

That represented a quick reversion to accepted Democratic Party orthodoxy. She also said apologetically that she was “not the expert on geopolitics on this issue.”

She was given the chance to address the stumble less than two weeks later in an interview with outlet Mic, but Ocasio-Cortez dodged the question and did not mention Palestine at all.

Ocasio-Cortez appears to have taken the lesson to heart: Since her May 2018 “massacre” tweet, she has rarely tweeted to her 12 million followers about Palestinians or about Israel’s abuses at all.

She never again tweeted about Gaza.

Last year, Ocasio-Cortez delivered another shock to supporters of Palestinian rights, when she agreed to participate in an Israel lobby event honoring Yitzhak Rabin, the late Israeli prime minister responsible for decades of expulsions and war crimes against Palestinians.

Amid strong criticism from Palestinians and supporters, Ocasio-Cortez backed out of the Rabin event.

But in hindsight, given her recent embrace of JCRC-NY, it appears her initial acceptance of the Rabin event was not a hapless mistake, but a calculated effort to curry favor with the Israel lobby.

True, Ocasio-Cortez has still occasionally taken positions that go beyond those of mainstream Democrats.

Last summer, she angered the lobby group AIPAC by spearheading a congressional letter to Secretary of State Mike Pompeo that called for putting conditions on US funding for Israel if it proceeded with formal annexation of land in the occupied West Bank.

This letter appears to be the only item on her official website that refers to Palestinians.

And while she has not endorsed BDS, Ocasio-Cortez did co-sponsor a 2019 resolution introduced by Ilhan Omar supporting the right to engage in boycotts as a matter of principle – though that resolution did not explicitly mention Israel.

Path to the center
Ocasio-Cortez’s embrace of an Israel lobby group like JCRC-NY is of a piece with her widely noted shift towards the center of the Democratic Party.

The backlash over her response to the question on Palestinians recalls the outpouring of disgust earlier this month when she deflected criticism from the Biden administration’s continuation of cruel Trump-era policies of detaining migrant and refugee children at the US-Mexico border.

Under Trump, she had called the detention practices “concentration camps” – language that has now disappeared from her vocabulary.

Anyone still defending and making excuses for @aoc? https://t.co/lMPkCNAisz

It also follows the backlash in December over the refusal by Ocasio-Cortez and every other member of her allegedly progressive Squad to withhold their support from Speaker Nancy Pelosi to force a vote on Medicare for All.

At the time, Ocasio-Cortez justified falling into line behind Pelosi on the basis that it would preserve progressives’ “leverage” to win a $15 minimum wage.

But then when Ocasio-Cortez and the Squad had the opportunity to hold up the Biden administration’s must-pass COVID-19 relief package unless it included the overwhelmingly popular minimum wage hike, they refused to do that too.

During an interview with DSA last month, Ocasio-Cortez slammed leftists skeptical that progressive policy could come out of the Biden administration as espousing “a really privileged critique” and suggested they were “bad-faith actors.”

Ocasio-Cortez’s shift to the right, including her embrace of the Israel lobby and echoing of its propaganda, could be linkedto reports that she may mount a primary challenge against Senate Majority Leader Chuck Schumer.

Or it may be motivated by the mundane and routine personal interests of almost every politician who seeks to stay in office and advance through the ranks of their party.

None of that would make Alexandria Ocasio-Cortez remarkable, but no one should mistake her for a courageous champion of human rights, especially those of Palestinians.