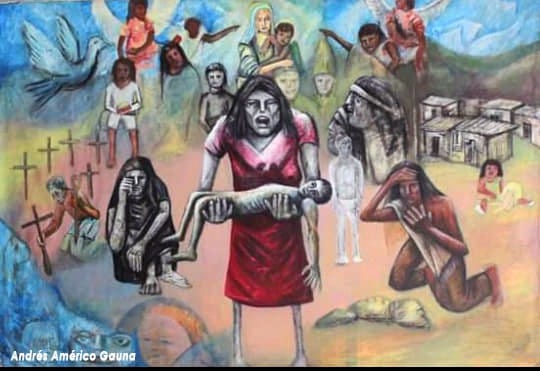 (APe) .- There are seven Wichí children who did not live to two years and died of hunger and thirst this January. Agribusiness dismantled, in the last ten years, 1,200,000 hectares. And it evicted a hundred thousand women, men and children who lived, ate and were cured under their leafy roof. The agricultural frontier is pushed and moved and soaked, soybeans and transgenesis where the grass was. A whole people among the trees remains, naked and helpless. And dies, little by little. With dozens of children on the border of life and death. given the size of the catastrophe, doctors Medardo Avila (advanced in this agency), Carlos Trotta and Emilio Iosa raised the request to Doctors Without Borders to install a humanitarian mission in a territory where the presence of the state chooses who leaves.

Chief Modesto Rojas says that the dead are nine. I’m sure he is right. No one talks to them. The authorities say there are another seven in very serious condition. Chief Modesto Rojas says that there are more than twenty children who have their lives hanging by a thread, like a flame that is blown and disappears. And he sure is right. Nobody talks with the caciques. “Arroyo came and didn’t want to talk to us,” he says. Three had barely died when the Minister of Social Development passed through Salta and, along with the Governor, walked where they took him. Far from the terrible. With food cards like a panacea. For a people in extinction, put to die as soon as possible to use the sparse land where they still drop their bones at night.

Doctor Rodolfo Franco says, from the Mision Chaqueña and Carboncito communities, to APe : “in my community none have died, both belong to Embarcación, San Martín department. Hollywood is my community because they still have grass to face hunger. Those in the north are catastrophic.”

In 2009, the newspaper Crítica published an investigation into the ties between the family and the officials of the then governor of Salta, Juan Manuel Urtubey, with the companies of grass clearing in that province. Urtubey ruled 12 years. And last week he went to live in Spain.

“I’ve been warning about this for years. I have notified the hospital that there is a lot of malnutrition. But it is a premeditated plan: it is about taking the land from them and for that they must first kill them; it’s ugly to kill them with bullets. So, they do it with hunger, with bad education, with bad health.” The World Health Organization, Franco says this agency, “argues that one doctor is needed for every 600 people. I attend two villages with 4000 and 2000. Sometimes they send some reinforcement sporadically, but they come in a hurry and go in a hurry. I am attending non-stop and we both obviously do the same. Salaries are very relegated.” Says Octorina Zamora, Wichi leader: “Is it my fault to starve to death when my habitat was taken from me, the grass was taken from me? In Salta there is almost no carob, which is the main food. When I was a girl there were no malnourished boys. So whose fault? Where there were carobs there is nothing.” We had been told that the problem was cultural. That the wichí took the sick and hid them in the bushes. What bushes?

While former governors leave for Europe and former presidents preside over foundations of world football, for ten years dead children can be counted in clusters, as Alberto Morlachetti said.” And write them down in the lists of the most cruel social crimes, with specific culprits, with names, faces and stories.

From January to June 2011 , thirteen children died in Embarcación, Pichanal and Tartagal. Of malnutrition and related diseases in the Salta that Urtubey had inherited from Juan Carlos Romero. In 2016, one child per month in the terrible north, in Salta and Chaco, who share the clearing and contempt. The last one in Rivadavia, one of the most punished plots in the province of the urtubeyes that set off looking for new horizons. The summer of 2017 devoured 21 wichis children in Santa Victoria Este, where Salta ends, as if falling into Paraguay. Twelve babies in that brutal summer of Santa Victoria Este were born dead because their mothers languished from hunger and thirst. Corralled by abandonment and neglect.

2020 dawns with another cluster of children are dying. While the former governor leaves and the former president takes office in the FIFA Foundation. Both are responsible for opening the doors to extermination. Both responsible, at least, for not avoiding it.

While the panic is pointing towards the Chinese coronavirus, children die of hunger and thirst in the fierce summer without trees or water from the salteño chaco dismantled, scrapped and pillaged.

“They went out to ban the word malnutrition at first, but it couldn’t be done,” Rodolfo Franco says to APe. They always avoid it on death certificates, there is no need to put feverish syndrome, you have to put another cause ”but“ I am 69 years old and 43 as a doctor and I speak of malnutrition, dehydration, because I cannot have water to sow, harvest and water plants, they can’t do anything. The land is very fertile, but without water there is nothing. ” For the doctor “it is part of the genocide plan. Bullets are expensive. You have to kill them with knives, as a desert campaign general said. ” Modesto Rojas, cacique, speaks of “a woman who died in Santa María giving birth. She and the baby died.” For the official count, there would be seven dead children. For Modesto’s, almost a dozen.

Santa Victoria Este has a secretary of Institutional relations of Calchaquí diaguita origin, Antonio César Villa. The mayor is wichí. “What is most difficult is access to water. Right now we have a drought that is devastating the region, all the animals are dying that can not even be eaten because many of them are sick,” says Villa. Meanwhile the Pilcomayo (river) runs. “It arrives more and more abundant and at any moment begins to overflow in the middle of this drought.” It is that the river, which goes down the hills of Bolivia and winds along the border with Argentina and southern Paraguay, is stuck in some sectors “by the mud accumulated by previous floods; year after year, avalanches are lowered and floods occur more and more frequently, due to clearing ”, said Villa with the eye of one that directly lived it.

The deaths, one by one

One. It was January 7. They did not recognize malnutrition. He was one year and two months old. He was from the Wichí community of La Mora, department of San Martín, near Tartagal.

Two. He was two years old. He died on January 11 in his little house. He was from El Quebrachal Mission. He had, they say, low weight.

Three. The same day in Santa Victoria Este. He was two years old and was from the community of Rancho El Ñato. Dehydration from vomiting and diarrhea, the report said. Organic insufficiency.

Four. January 17 The little girl wasx two years and 8 months old. She died after being transferred from Morillo (in Rivadavia Banda Norte) to the Orán hospital. She had diarrhea. They blamed the parents.

Five. It was on January 21 at the Juan Domingo Perón Hospital in Tartagal. He was from the Las Vertientes community, Santa Victoria Este. He was transferred on a sanitary flight. They blamed the parents.

Six. He had chronic malnutrition. They took him to Morillo, from El Trafico community. He was referred to the Oran Hospital and died in the ambulance, which stopped due to mechanical failures.

Seven. The mother died in childbirth. And, says Modesto Rojas, wichí chief, the baby too. She was from Mission Santa María and had her twelveth birth in her little house without assistance. They tried to transfer her to the hospital but she died on the way. Meanwhile doctors Carlos Trotta, (former president of Doctors Without Borders for Latin America), Medardo Avila Vazquez, (Network of Physicians of Fumigated Villages), and Emilio Iosa (former President of the Internal Debt Foundation) formally raised the request for a humanitarian mission to be installed in the NEA in the face of the sanitary horror that the original surviving peoples are living in the deepest north. “The health situation is very serious, hunger and the stress of dispossession for such a meek people is terribly traumatizing, malnutrition is widespread, and children with marasmus and kwashiorkor (diseases derived from malnutrition) in the African style is detected in almost all communities, tuberculosis and chagas have very high incidence rates, maternal mortality is suspected to be very high as well,” says the document.

“The response of the national and provincial state has been totally insufficient to help native peoples stripped of their forests. Even the Urtubey government continued to authorize clearings in favor of large soy groups in the place and their health teams on the ground are very scarce and do not have sufficient resources or capacity to face the humanitarian crisis.” The doctors Medardo Avila, Carlos Trotta and Emilio Iosa are convinced that “the only possibility is that an honest, efficient and impartial humanitarian organization such as MSF will be installed in the area and develop actions to contain health and basic infrastructure deaths, until we Argentines can recognize and respond to the problem that our productive system is generating in this population that is estimated among the different ethnic groups of almost 100,000 people ”.

A permanent system that runs through governments, the vein through which real power circulates. The one who determines who will be part of the next world and who will have to stay inexorably on the way. The ancestral condemnation is for those who twinned with nature to eat it and drink it, to return to it as fertilizer and to become spiritual as butterflies in the carob tree sky. A genocide that has not stopped for five and a half centuries.