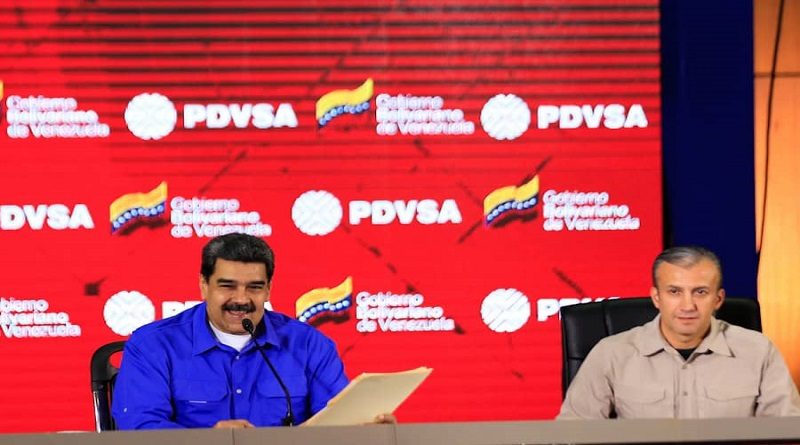 The vital industry will now be overseen by Economy Vice President Tareck El Aissami in efforts to increase output.

The body has “plenipotentiary” powers for the restructuring and reorganisation of the state oil firm PDVSA, and is charged with increasing production to two million barrels per day (bpd) by the end of 2020. It is also tasked with “defending” the industry from crippling US sanctions and “imperialist aggression.”

Nine oil worker representatives will also join the commission, including the president of the largest oil workers’ union, Wills Rangel, and the directors of the Jesus Rivero Bolivarian Worker’s University, Jesus Martinez and Luis Rodriguez.

Oil Minister Manuel Quevedo is due to continue in his role as PDVSA president, a position he has held since 2017, as well as sitting on the 18-member presidential commission. Critics have pointed to his failure to deliver on repeated promises to recover falling production levels.

RELATED CONTENT: New US Sanctions against a Subsidiary of Russian Oil Company Rosneft for Trade with Venezuela

Speaking at a publicised assembly of PDVSA staff, Maduro declared that the country was facing an “energy emergency” and affirmed that he will accept “no more excuses.”

While a roadmap for the recuperation of the industry is yet to be made public, initial measures included demanding PDVSA’s vice-presidents for production, finances, and refining offer their resignation, as well as ordering workers to immediately close balance books and hand in evaluation reports.

Venezuela’s oil output has stabilised around 700-800,000 bpd this year after a four-year collapse which has seen production drop from 2.3 million bpd in 2015.

The industry has been plagued by corruption, mismanagement and brain drain, issues that have been exasperated by US sanctions. The Treasury Department first levied financial sanctions against PDVSA in August 2017, and imposed an oil embargo in January 2019.

The isolation of the Venezuelan oil industry was deepened in August by a general embargo against all state-run sectors, which also authorised secondary sanctions against third parties working with the Venezuelan government.

The embargo led Caracas to file a lawsuit against the US government last week at the International Criminal Court, claiming that it constitutes a “crime against humanity.”

Widespread fuel shortages continue to plague many regions of the Caribbean country, with S&P Global Platts releasing a report on Friday that claims that the country suffers from 58 percent and 71 percent deficits for gasoline and diesel respectively. The global finance firm also alleges that PDVSA’s refineries are only working at 15 percent of their capacity, and speculates that the presidential commission is planning on introducing a national fuel rationing system.

Rosneft and Repsol defy sanctions threats
The unveiling of the presidential commission came one day after the latest round of US sanctions, this time targeting Russian state-run oil giant Rosneft for trading with Caracas.

On Friday, India’s oil firm Reliance, Spain’s Repsol and the US’ Chevron were also reportedly put “on notice” for their involvement in Venezuela, according to an anonymous press briefing offered by a senior White House official.

Since, both Rosneft and Repsol have vowed to continue their involvement in the Latin American country.

The Russian firm unveiled new investment for the joint PDVSA-Rosneft Boquerón Venture in Monagas State on Saturday, which looks to amplify the use of the groundbreaking “coiled lift” technology to increase production, as well as at the joint Petro Monagas venture, where a 18-megawatt TG2 electric generator culminated its trial phase.

Repsol has also been quick to reaffirm its commitment to the country, with CEO Josu Jon Imaz telling analysts that the firm’s intention is to “maintain activity in Venezuela.” Earlier this month, Repsol Chairman Antonio Brufau told reporters that the firm “has worked in Venezuela for 20 years and will continue for at least 20 more years.”

Despite pledges to stay in Venezuela, the Spanish company has been clipping back its investment in the recent months, reducing extraction levels to 50,000 bpd in joint projects and investment to €239 million, around half that of December 2018. Repsol has repeatedly denied violating US sanctions, allegedly by exchanging crude for fuel and diluents.