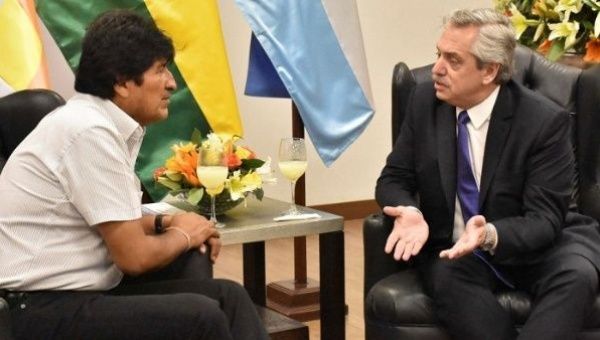 Argentinian President Alberto Fernández stressed that Evo is the “only” president who has changed Bolivia’s economic structure for the good of the population.

The newly elected President of Argentina, Alberto Fernández, denounced this Saturday the non-recognition of the electoral victory of Bolivian leader Evo Morales, and described it as a “huge injustice”, while reiterating the great respect he feels for the indigenous leader

Fernandez declared his certainty that Evo is “a great president,” while expressing his “enormous respect for what he did and for his management.”

The leader of the Front of All expressed his annoyance at the recommendation of a second electoral round by the Observation Mission of the Organization of American States.

In Fernandez´s opinion, this constitutes a lack of respect for the institutions of Latin American countries. He also urged the international community to recognize the triumph of the indigenous leader who, he considers, is the “only” leader who has managed to change Bolivia’s economic structure for the good of the population.

I thank the brothers @alferdez and @CFKArgentina They greeted us and congratulated us on the victory of our people in the elections of 10/20/19. #Argentina and #Bolivia are sister countries that share the struggle for integration and sovereignty of the #PatriaGrande.

After the general elections on October 20, in several areas of Bolivia there have been violent protests as a sign of rejection of the re-election of Evo, considering that it is the product of a manipulation of the electoral exercise.

Given this, the leader of the AL Socialism Movement (MAS) demanded this Friday from the opposition to present to the OAS Mission concrete evidence that validates their allegations of fraud, instead of stimulating the revolts that add to the chaos of the country.

That international organization began an audit of presidential officials on Thursday to unveil the truth about the electoral process and discard the demands of the opposition that seeks to escalate to power in the Latin American nation. For Evo, this period of instability is nothing more than an attempted coup d’etat by the opposition that has stimulated mass protests in the country.