A big trail of black smoke coming out from the IVSS La Yaguara warehouse in Caracas, as seen from a safe distance. Photo: Twitter/@RCR750.

Caracas, August 18, 2022 (OrinocoTribune.com)—This Thursday, August 18, the vice president of Venezuela, Delcy Rodríguez, spoke about the fire that occurred on Monday in a Caracas warehouse belonging to Venezuela’s Social Security Institute (IVSS), where medication and healthcare equipment was stored. There is evidence, said Rodríguez, that the fire was “intentional, and not an accident,” as it began in five separate points in the building, according to recordings by thermographic cameras and drones. In addition, propellant was found on the scene by firefighters.

Rodríguez indicated that the fire destroyed valuable medication for patients who require dialysis. An amount equivalent to roughly four months of demand was destroyed, along with 134 new dialysis machines. However, she emphasized that the authorities are making efforts to quickly replenish the reserves and the machines, as reported by Alba Ciudad.

Venezuelan minister for the interior, Remigio Ceballos, noted that, in tests carried out by the Scientific, Penal, and Criminal Investigation Service Corps (CICPC) and the Fire Department, the presence of five sources of ignition was determined. Chemical and technical analyses determined that in three of these cases direct flame would have been required, Ceballos noted, which “totally rules out any fortuitous or accidental factor” and indicates that there must have been a “human factor” at the origin of the fire.

“The chemical characteristics of the substances in this medical material caused the fire to spread rapidly,” said Ceballos. Firefighters and security forces responded promptly to protect the surrounding population, preventing the fire from spreading to residential areas and preserving some of the warehouse itself.

RELATED CONTENT: Lawfare as an Imperialist Weapon: The Case of the Venezuelan Plane

Delcy Rodríguez recalled that in 2019, “when President Maduro was sworn in for his new term, there was an attack against six IVSS warehouses, where all the hospital supply reserves were set on fire.”

In July, a sabotage to a high-power transformer in Caracas left several sectors of the capital city without electricity. Likewise, in January, an attack was recorded on the electrical system in Barinas at the time of the governmental elections. Law enforcement agencies pointed out that far-right groups were behind those acts, in some cases with support from the Colombian government of outgoing president Ivan Duque. 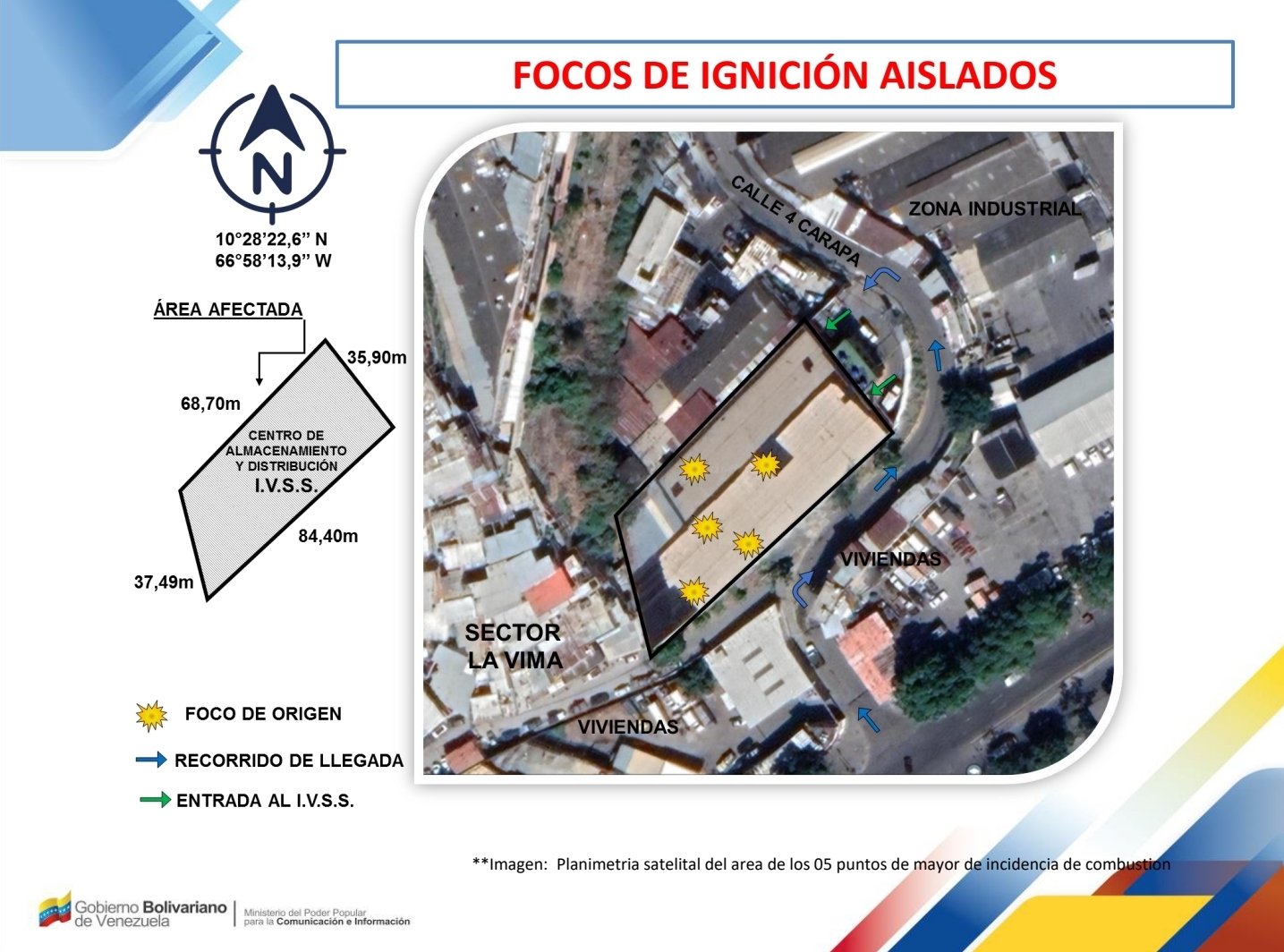 “It is a wicked mind who is behind this,” said Rodríguez. “[If] a dialysis patient misses their treatment, they would die, so we have reserves. We have reserves for two months… I want them to have peace of mind that they will continue to receive treatment.”

Dialysis patients can rest easy
Rodríguez recalled that in this warehouse there were important reserves of materials for peritoneal dialysis and hemodialysis patients that were lost, as well as 134 lost new hemodialysis machines that were intended for new healthcare centers that are under construction. When these machines are installed, they would provide 82,000 dialysis sessions per month. President Maduro requested that they be replaced as quickly as possible.

Rodríguez indicated that new scheduled shipments of medications and hemodialysis supplies have arrived, and that another plane will arrive to replenish the reserves by 5 p.m.

She called on dialysis patients and their families to be calm. “In the country there are 78 inpatient units and 50 outpatient hemodialysis units. Each of these units has reserves for two weeks, and we have warehouses with months’ reserves.”

The vice president said that investigations continue to attempt to determine responsibility for the incident, and to find those “who intended to cause harm to our people.”

“This is one more page in the criminal file of far-right extremists who seek to make Venezuelan people suffer, whose lives simply do not matter to them, because their fascist thinking is disdain for life, and that is why they attack healthcare,” Rodríguez said.

President Maduro calls it terrorist attack
President Nicolás Maduro described the arson attack as a “terrorist attack.” According to the president, these criminal actions were perpetrated by “groups trained in Colombia in the times of Iván Duque and that are scattered around,” who continue to respond to the opposition’s agenda.

“What criminals,” President Maduro said in a televised broadcast. “What can be in the nauseous mind of one who orders to put that bomb, of the one who places the bomb? What can be? Who are they harming by burning the medicines of kidney patients who urgently need them? Who are they hurting? Maduro? They harm the sick, the people, the family, the community.”

In his opinion, what happened in the IVSS warehouse was a preamble to what can be expected in the campaign for the 2024 presidential elections. “This is how their campaign is going to be in 2024, this is how their policy has been: a group is in charge of terrorism and harm, another group is in charge of planting bombs, of killing, of attacking the electrical system, of attacking the gas pipeline,” Maduro said.

In relation to how far-right opposition media and actors are using the incident to attack the government, President Maduro added that “the so-called politicians, in political strategy, lame politicians, try to benefit from the damage done by terrorists, and end up being accomplices by omission, by action. Indirectly or directly, they end up being accomplices of terrorism, because they do not go out to condemn terrorism, they go out to take advantage of the perverse and negative effects of terrorism. That’s what right-wing politicians do.”

Local analysts pointed out that the loss of a Boeing 747-300 belonging to EMTRASUR, controversially grounded by Argentinian authorities, is another criminal attack against Venezuela that reduces the emergency response of Venezuelan authorities, as it may have allowed the country to quickly transport replacement medicines and equipment. In this sense, President Maduro commented today that the loss of the EMTRASUR plane had delayed by 18 hours the firefighters that Venezuela sent to Cuba to extinguished the Matanzas fire.