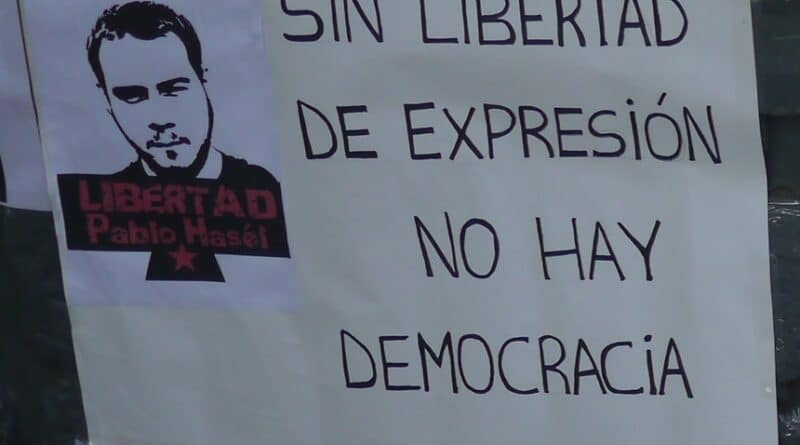 February 21 (Special for OrinocoTribune.com) – On Saturday, February 20, several well-known musicians, poets, actors, and music bands held a concert in Buenos Aires, Argentina, in solidarity with jailed Catalan rapper Pablo Hasél. The concert, organized by Che Adelita Cultural Front (FCCA), Resumen Latinoamericano, and Argentine Solidarity Collective for the Catalan People (CASPC), was held at Parque Centenario in Buenos Aires. It started at 4 p.m. local time, and lasted over four hours. Spectators were allowed at the venue under strict COVID-19 protocols and physical distancing measures. The program was also streamed live for an international audience, through multiple radio stations of Argentina, Uruguay, Chile and Venezuela, a number of TV channels, and the YouTube channel Tertulias en Cuarentena (TECs), where the live transmission was moderated by Txema Sánchez.

With a Whipala and a poster of Pablo Hasél made by Ignacio Liang of Che Adelita Front forming the background of the open-air stage that was also decorated with Catalan, Basque and Mapuche flags, the event started with the video of the rapper’s song “Ni Felipe VI” displayed on a giant screen. This song, along with some tweets, has been used as evidence of his “defamation” of the Spanish monarchy, for which he has been sent to prison. Before the performances, Carlos Aznárez of Resumen Latinoamericano highlighted the importance of the event, asserting that although many artists all over the world are in solidarity with Pablo, “it is fundamental to fight and win the battle of the streets for those who are in the lowest rungs of the hierarchy—here, in Europe, in Africa, wherever it is necessary.” The event was internationalist and intersectional, and the artists denounced not only the imprisonment of Pablo Hasél and the lack of freedom of speech in Spain but also the systems of injustice and violence in Latin America—police brutality, violence against women, racism, systematic assassinations of political and social activists in Colombia and elsewhere.

Actress Eliana Wassermann read out selected lines from Hasél’s songs, while rappers Malena D’Alessio, Mariana Debenedetti and Liz Fleitas warned the European powers that be that, “with your ‘constitutional’ monarchies and ancient powers, you cannot lecture us on democracy,” criticizing imperialist acts of interference and sanctions against Latin American countries. Through powerful words and jubilant beats, OriónXL, Mario, and the duo Combination Sound System denounced capitalism, imperialism, and patriarchy—powers that give rise to “so much inequality and incarcerate those who protest against them.”

Catalan musicians Carlés Ros and Griselda Messegué, and Basque musician María Torrellas, all of them residents of Buenos Aires, sang in their respective native tongues and demanded freedom for all Catalan and Basque political prisoners in Spain. Mapuche rap artist Urraka Negra, who rapped her support for Pablo in her mother tongue, drew attention to the similarities between the struggles of the Catalan people and the Mapuche indigenous people of Argentina and Chile. “We, the Mapuche people, know how our battles are repressed, our words are censored,” she said. “And this is the result of colonization, both in Cataluña and in our ancestral territory.”

Actor Norman Briski moved everyone to tears as he remembered the 30,000 desaparecidos of the Videla dictatorship while articulating that “we are imprisoned as long as Pablo remains imprisoned. Why are we denouncing it? Because what else do we have? The despot has weapons, the law, the so-called democracy that kills our children… They want to silence the messenger, the singer, but we are singing and we will sing.”

“It is an atrocity,” said rap musician and activist Daniel Devita, “that even in 2021 someone is imprisoned for speaking truth to a king. [The royals] still believe that they have these old powers, that they can cut off people’s heads and spill the blood of innocents and people will still remain silent.” People have not remained silent, he highlighted, as Catalan youth have taken to the streets in thousands in support of Hasél, who is “a prisoner for truth” according to the Argentine rapper.

Singer-songwriter Manuel Estrach performed revolutionary Latin American songs, and the women’s duos Chocolate Remix and Kris Alanis and Agus López pointed out, through ironic lyrics, that the amalgamation of fascism and patriarchy takes away people’s rights to liberty and freedom of thought and expression.

Colombian music band Caracolí closed the event with Caribbean rhythm and dance. Apart from the artists who were scheduled to perform, there was spontaneous participation by a Senegalese dance group, giving the program the internationalist character that was proper for it. The public became performers themselves as they danced, sang and painted slogans on the streets around the venue in various languages, demanding Pablo Hasél’s unconditional release. Pablo’s friends, supporters and family also participated at the event through video conferencing.