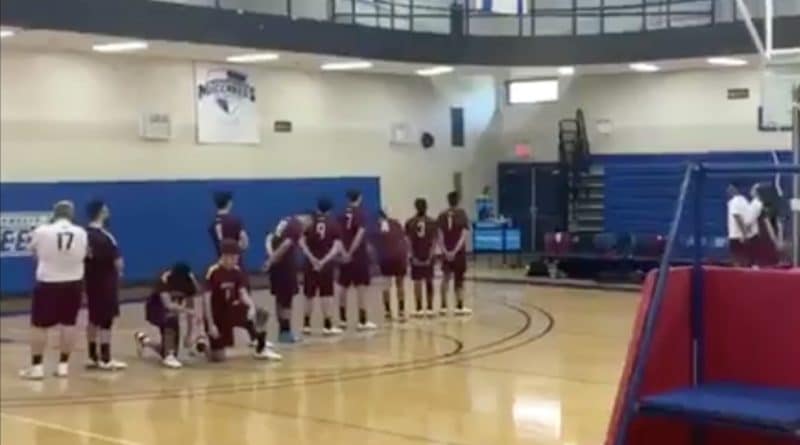 Two Volleyball Players At Brooklyn College Are Facing A Torrent Of Abuse For Protesting During The Israeli National Anthem.

In August of 2016, quarterback Colin Kaepernick began his NFL season by kneeling during the national anthem in protest of racism and state violence. He purposefully chose the space of the anthem to raise the issue of the gap between what this nation promises and what it delivers. It was a powerful, iconic act that inspired athletes from a variety of sports to do the same. From the pros to college, to high school, to even middle school, athletes were inspired to take a knee less to lend their solidarity to Kaepernick than to protest racist police killings where they lived.

In the tradition—and the extension—of this movement, two volleyball players from Brooklyn College went to one knee before a game this week against Yeshiva University. During the playing of Israel’s national anthem, which Yeshiva plays before every contest, they kneeled as a protest against Israel’s racism and state violence, most pointedly against the country’s apartheid policies of occupation that keep the 2 million Palestinians of Gaza in an open-air prison surrounded by checkpoints and walls. They weren’t just going to stand for Israel’s anthem, hand over hearts, and do nothing.

The two athletes, Hunnan Butt and Omar Rezika, were immediately slandered as anti-Semites because of their simple, silent gesture of dissent.

Yeshiva University President Ari Berman went on the attack, and in a shockingly irresponsible—not to mention dangerous—statement about two students, he said:

RELATED CONTENT: No to a Nation-State Neither Jewish, nor Muslim, nor Christian

It is unfortunate that some members of the opposing team disrespected Israel’s national anthem. We are proud to be the only university who sings both the American and Israeli national anthems before every athletic competition and major event. Nothing makes me prouder to be an American than living in a country where our religious freedom, our Zionism and our commitment to our people will never be impeded and always be prized.

Think about the irony of this statement. Berman prizes “living in a country where our religious freedom, our Zionism and our commitment to our people will never be impeded and always be prized,” yet this educational leader is willing to demonize two teenagers for exercising our most cherished freedom: freedom of speech. Berman also doesn’t see the irony in the fact that this was the national anthem of another country during which the players kneeled, not the country in which the players were in fact living or playing.

Berman, by turning up the heat instead of seeking some kind of dialogue, opened the floodgates against these two students, who have since set their social media to private in the face of a tidal wave of attacks. The Simon Wiesenthal Center, to take just one example, described their actions as “this flagrant display of antisemitism,” and demanded that Brooklyn College punish the students.

Not surprisingly, the story was also picked up by far-right Zionist Twitter feeds, none of which I care to give free publicity to. But suffice to say, these same feeds that praise a president who makes anti-Semitic comments and whose acolytes chant “Jews Will Not Replace Us” are slandering two young people in frightening fashion because they dared stand for the voiceless of Palestine.

Several of these feeds have also spread the lie that the athletes did not shake hands with their opponents following the game, something that both Yeshiva and Brooklyn College have denied.

I reached out to Noura Erakat, the author of Justice for Some: Law and the Question of Palestine. She said to me, “There’s a stark distinction between anti-Zionism and anti-Semitism. And though there has been a deliberate effort to conflate Jewish liberation with Zionism, that is neither universally accepted and hardly historically accurate. These students took a clear stance against a national symbol of the state in a manner that echoes protests among black athletes in the US. And just as black protest has been maligned in order to avoid the issues of racial injustice, so too is the students’ legitimate protest being unjustly attacked.”

I also talked to Yousef Munayyer, from the US Campaign for Palestinian Rights. He commented, “These young athletes demonstrated the courage of their convictions and chose to send a message of dissent with this simple act. At a time when activism for Palestinian rights is increasingly facing attempted repression, they stood tall for justice by taking a knee. They should be applauded.”

Now, the two athletes are not making any comment, perhaps fearful that being put on “jihad watch” by one website (seriously) could affect their lives. This is not Israel. If Yeshiva wants to play the anthem, that is their business. To expect athletes to stand with their hand over their hearts only demonstrates just how many inroads Trump’s brigade of Christian soldiers (who think we are going to hell come the rapture) along with their pro-Occupation allies have made in challenging basic freedoms of speech. Many rushed to Colin Kaepernick’s side in solidarity when he took the knee. We should do the same for Hunnan and Omar.