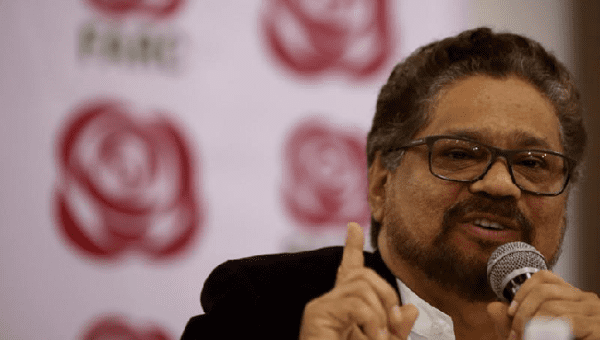 Former FARC leader Ivan Marquez, back after a six-month hiatus, condemned the State of Colombia for violating the peace accords in a video released on the 24th International Rosa Luxemburg Conference.

Ivan Marquez, who used to be second-in-command of the former Revolutionary Armed Forces of Colombia (FARC, for its acronym in Spanish), reappeared for the first time in a video after going into hiding six months after renouncing to his seat in the Colombian Senate.

“To the revolutionary woman who is still commanding the Spartacus League, in a fight to the death against capitalism, with you Rosa, we want to reiterate that the revolution is magnificent and that everything else is a folly, and that socialism is not precisely a fork and knife issue but a cultural movement, a great and powerful conception of the world,” said Marquez in a video recording which was released onthe occasion of the 24th International Rosa Luxemburg Conference in Berlin. “After two years of the agreement’s validation, the results in terms of compliance by the state are discouraging. More than 400 social leaders and 85 guerrilla fighters have been killed in the country, which affirms the terrifying prospects of deaths,” added Lucio Marin alias ‘Ivan Marquez,’ also one the chief negotiators of the 2016 peace accords.

Marquez’s location is undisclosed in the video and remains unknown.

For Marquez, the Colombian state is the main perpetrator of the peace agreement, which according to him has “opted for treachery and noncompliance of that which was agreed in good faith.” The former guerrilla leader believes the decision to lay down weapons was hastily executed, without having a prior “political, economic and social reincorporation of guerrilla fighters.”

Another point of contention for Marquez is the detention of Jesus Santrich, also part of the upper echelons of the Common Alternative Revolutionary Force (FARC, for its acronym in Spanish) political party, who was detained after the United States requested his extradition on drug-trafficking charges.

The Nation’s chief prosecutor, Nestor Martinez, has admitted that he does not have proof of Santrich’s alleged participation in the crime of drug-trafficking.

After the 2016 peace accords were signed, the guerrilla transformed into a political party which carries a different name but still maintains its symbolic acronym: FARC.

Back in October, in a letter directed to Marquez along with another historic FARC leader, Oscar Montero, whose whereabouts remain undisclosed, denounced in the letter “three acts of folly” that drove the peace process to the abyss. The three acts they refer to are legal uncertainty, modifications to the signed agreement, and failure to fulfill key aspects.