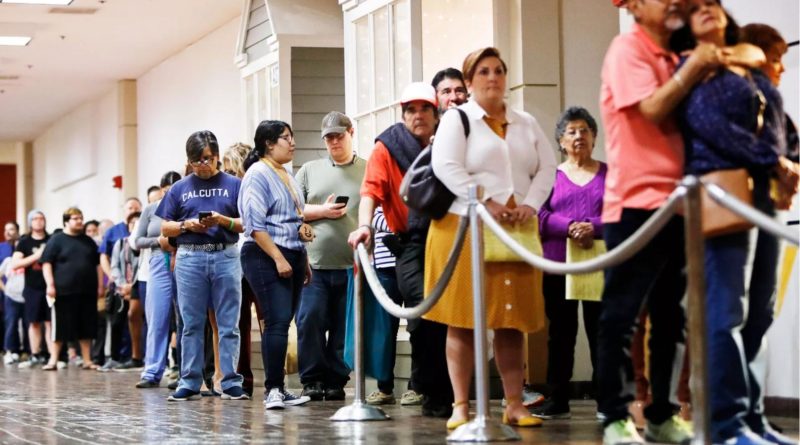 The Texas Democratic primary on Super Tuesday saw long lines at some polling sites in predominantly black and Latino neighborhoods, and reportedly dissuaded at least some Texas voters from casting their ballot at all.

The Harris County Clerk’s Office had to send 12 more voting machines to the Houston Community College site to accommodate the over 300 people in line, even though polls had already officially closed. Some voters called civil rights groups and reported waits as long as two hours at college campuses, while others just gave up, according to reporter Kira Lerner:

.@OrganizeTexas tells me that wait times are so long in Harris County’s Black and Latino neighborhoods that people are going from location to location, and some voters are giving up on voting

We don’t know whether turnout was higher than expected in these areas, but it’s likely that the problem was larger — and more enduring — than that. Long lines at polling places are a perennial problem in America.

Texas in particular has been making it harder for people to vote since Shelby County v. Holder, a 2013 case in which a divided US Supreme Court struck down a key provision of the Voting Rights Act that had required that jurisdictions with a history of discriminatory voting practices get the federal government’s approval before changing their election rules.

The line at TSU, Houston, for the Texas Democratic primary, 30 min after the polls closed. The line continues inside the building. From the front doors to the voting booth took me over 2 hours in line — and nobody in this picture has made it that far yet. pic.twitter.com/KvG0raAojv

After the decision, Texas immediately implemented a stringent law that required voters to present photo IDs, and started to unilaterally close polling sites in a way that disadvantaged minority voters. According to a report by the Leadership Conference Education Fund, a civil rights group, Texas has closed about 750 polling sites since 2012, including 542 sites in 50 counties where African American and Latino populations have significantly grown in recent years.

At another polling location in Houston, a voter who waited in line for three hours said only eight voting machines were set up for those voting in the Democratic primary. https://t.co/7hiYgnE7m9 #TexasPrimary

With fewer polling sites available, it’s not surprising that voters in Harris County were facing long wait times on Tuesday night. It’s a problem for candidates relying on turnout among Latinos, who make up about 30 percent of the electorate in Texas, and African Americans, who account for about 13 percent.

Vermont Sen. Bernie Sanders has been polling well among Latino voters in Texas: He led the field with 26 percent support, 6 points over his rival former Vice President Joe Biden, according to a February 28 Univision/University of Houston poll. But it’s been a tight contest in Texas between Sanders and Biden, for which Sanders needs significant Latino support to win. Sanders has been trying to appeal to Latinos with a progressive policy platform that speaks to their core interests — health care, jobs, and, for some, immigration — and has invested heavily in spreading his message, in both Spanish and English, to Latino communities in Texas and other states.

Minority voters waiting in lines for hours in Texas to "rig" the Democratic primary (if you believe what some people keep saying.) That's dedication! pic.twitter.com/nIrHtAy6Xr

Biden, meanwhile, has been drawing significant support from African American voters, who powered his comeback that began in South Carolina and continued through other Southern states Tuesday night.

The lack of access to polling stations and the ensuing chaos on Super Tuesday also isn’t good news for Democrats who are hoping to flip the state blue in 2020 for the first time since 1976. That will require capitalizing on a shift to the left among college-educated voters, as well as getting Latino and African American voters to turn out, despite the shortage of polling locations in their neighborhoods.

Featured image: Voters wait in line to cast their ballots in San Antonio, Texas on March 3, 2020. Edward A. Ornelas/Getty Images