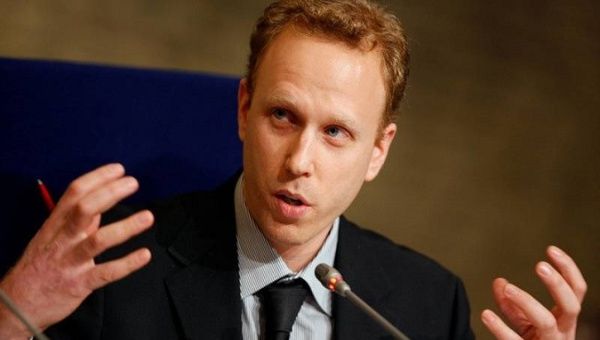 The journalist, from the independent media outlet The Grayzone, claims that he is being harassed by the federal government for their coverage of the siege of the Venezuelan Embassy in the U.S. back in May.

Max Blumenthal, one of the journalist who covered the siege of the Venezuelan Embassy in the U.S. back in May, offered an interview to Russia Today shortly after being arrested and released for the alleged aggression against an opponent of the Bolivarian Government, a charge for which he will be tried.

“The right-wing lying opposition in Venezuela is colluding with the federal government to prosecute me for the journalism we did in The Grayzone,” which exposed “the U.S. coup against Venezuela” and the opposition’s Juan Guaidó’s team for “assistance undercover and open” which he received “from Washington,” Blumenthal mentioned.

“They have tried to steal a country, an embassy, ​​and now they are trying to steal my freedom,” the reporter said. He narrated how he was arrested on October 25th, after several agents surrounded his house and threatened to break the door.

The federal government put out an arrest warrant that classified Blumenthal as “armed and dangerous” to terrorize him. While being arrested, he could not contact anyone. He was denied a call to his lawyer twice.

The journalist for the independent media outlet The Grayzone was left “14 hours in a cell with another detainee” and spent the next 24 hours “in other cages”. ​​​​Blumenthal denounces that the “falsified” and “completely invented” charges he faces for simple aggression is “a misdemeanor” however he affirmed that “the federal government, the Trump Administration, are determined to take him to trial.” He considers it an obvious “political persecution.”

These accusations are “fraudulent, a total lie”, and strictly related to media coverage on the siege of the Venezuelan Embassy in Washington, however, the newsman is confident that “facts will speak for themselves” because he declares himself “100% innocent “and has” nothing to fear. ”

The Grayzone journalist questions the circumstances of his arrest: the order was issued five months ago and, if he would have been warned about it, he could have turned himself in voluntarily. In addition, “someone with a lot of knowledge” in this case assured him that “the judge had already denied an order.”