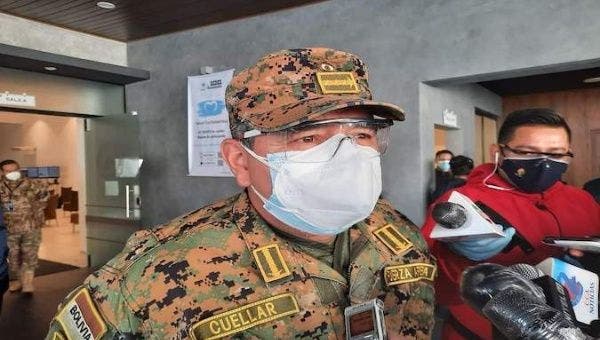 He is the first member of the Armed Forces to be imprisoned for the State terrorism carried out against citizens during the 2019 coup.

November 26, 2020.-  The Prosecutor’s Office ordered the arrest of Bolivian Air Force General Alfredo Cuellar over the massacre that occurred in Sacaba city during the protests against the U.S.-backed coup that took place in November 2019.

The Bolivian general will remain in a cell of the Special Forces for the Fight Against Crime(FELCC) until his cautionary hearing.

“In the Sacaba events, I only performed administrative functions. I was the fifth man in the chain of command,” he said.

Cuellar, who is accused of murder, is the first member of the Armed Forces to be imprisoned for the Sacaba and Senkata massacres.

1/ Relatives and victims of the Senkata massacre in which 10 people were killed and 30 were injured outside of the YPFB gas plant demanded justice once again on Tuesday, in front of Bolivia's Ministry of Justice. Still no investigation nine months on. pic.twitter.com/fQhPbjDDda

“As part of the investigations, we will call on other officials to give their statements,” Cochabamba Attorney General’s Office announced.

The Legislative Commission that investigated the deaths in the 2019 post-electoral conflict determined that ten people died in Sacaba from impacts of gunfire from the Armed Forces and the Police. It is also reported that the military fired chemical substances at demonstrators.

Authorities are also making progress in the investigation of the Senkata massacre in El Alto city, where 10 people were killed. No details have been released yet.