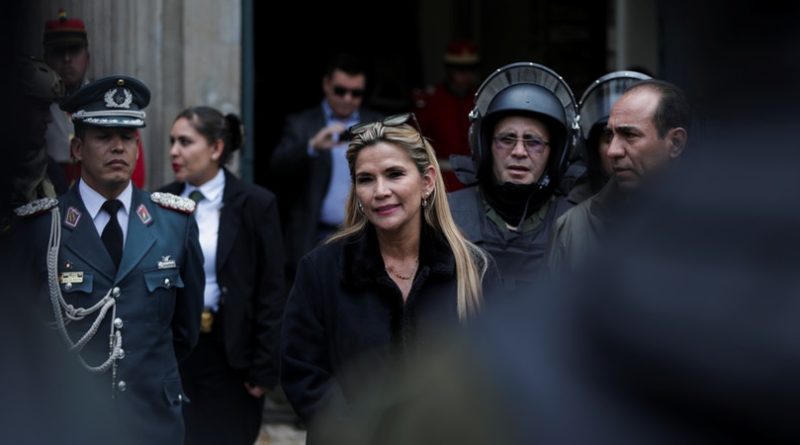 Coup President Jeanine Áñez, who came to power in November, has rejected claims that her predecessor, Evo Morales, was ousted in a coup — while cracking down on dissent and calling for new elections to solidify the rule of conservative opposition forces that seized control of the government in Morales’s absence.

As many critics have noted, the cycle bears a striking similarity to the coup d’etat that ousted Honduran President Manuel “Mel” Zelaya a decade ago. The left-wing leader was whisked out of office by the military, only to be replaced with an interim government led by right-wing opposition forces that swiftly consolidated power through a controversial election process.

The parallels were apparently not lost on the Bolivia’s new rulers. The Áñez government has retained the services of the same Washington, D.C., consultants hired by the Honduran interim government to build American support.

CLS Strategies did not respond to a request for comment.

The crisis in Bolivia mirrors the 2009 coup in Honduras in many ways. Morales and Zelaya both forged ties with Venezuela, raised the minimum wage, expanded social services, and opposed the privatization of major industries. The two leftist presidents faced mounting criticism over what looked like attempts to undemocratically remain in office. Zelaya sought a referendum on whether he could pursue a second term in office, which was prohibited by the constitution. Morales sought an unprecedented fourth term, raising questions over whether he was slowly bending Bolivia’s institutions into allowing permanent rule by his party.

The military also played a crucial role in the downfall of both leaders. In the dead of night, on June 28, 2009, military officers forced Zelaya’s resignation at gunpoint, arresting him at his residence. Morales fled Bolivia after the commander in chief of the military asked for his resignation on November 10, 2019.

And in both cases, right-wing opposition forces seized power after the downfall of Morales and Zelaya, and sought international recognition to build legitimacy.

After the coup in Honduras, then-Sen. Jim DeMint, R-S.C., announced he would lead a group of lawmakers to the capital city of Tegucigalpa as a gesture of diplomacy with the new interim government. Initially, the Obama administration refused to provide military aircraft for the trip, and DeMint responded by unilaterally blocking Obama nominees. Eventually, the Obama administration relented, and DeMint was granted a plane to travel to Honduras.

Behind the drama, lobbying disclosures show the firm now known as CLS Strategies played a part in the strategy. Juan Cortiñas, a partner at the firm, briefed legislative staff and served as DeMint’s personal translator with Honduran government officials. The team from CLS Strategies also attempted to place opinion columns, pitched reporters at major newspapers, and scheduled interviews on cable networks to promote the interim government’s opposition to Zelaya’s return.

The interim Honduran President Roberto Micheletti, from the right-wing National Party, suspended civil liberties, cracked down on protests, and blocked the transmission of several media outlets, including CNN, Telesur, Channel 8, and Radio Globo.

CLS Strategies again played a background role. After the coup, David Romero, a host with Radio Globo, known for its sympathies with Zelaya, went on an anti-Semitic rant that suggested Israel and Jews were to blame for the Zelaya ouster. Romero apologized, claiming he was caught up in the moment, but his hate-filled rant gave an opening to the Micheletti government, which shut down the radio station and confiscated his equipment. As international outcry grew over Micheletti’s censorship of many different media outlets, CLS Strategies circulated Romero’s comments and condemnation of Radio Globo in multiple press releases, refocusing attention on Romero’s rhetoric.

In the end, controversial new elections were held in Honduras that established National Party as the official party in control of government. The National Party, despite years of corruption scandals and growing evidence that leading figures in the party have been directly involved in drug cartel operations, has controlled the Honduran presidency ever since. President Juan Orlando Hernández sacked opponents on the Supreme Court and passed a change to term limits, the very issue that ostensibly led to Zelaya’s ouster. Hernández subsequently sent military police to violently suppress protests around the disputed results of the 2017 presidential election, which elected him for a second term.

In Bolivia, a similar story appears to be playing out. Áñez, former conservative opposition leader in Bolivia’s senate, took power after Morales’s ouster and moved immediately to remake the government, replacing military and cabinet officials. She also announced her intention to prosecute Morales and members of his political party as terrorists. Several people who protested the Áñez government have been killed. The interim Bolivian government claims Morales supporters are plotting violence.

The haze of uncertainty around the future has left the public wary of whether the elections will truly be fair. In its registration statement, CLS Strategies indicated that it will reach out to public officials, government agencies, newspapers, and civil groups in the U.S. on behalf of the interim Bolivian government. Cortiñas, who served as DeMint’s translator, is now registered to represent the Bolivian government.