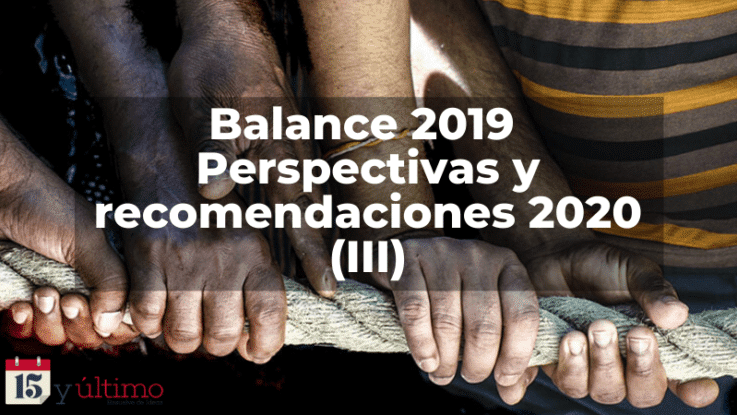 Yesterday was the first fortnight of this 2020. And although there is still a long way to go and in this country – and in this world – anything can always happen, it is seen that we can be sure be sure of at least two things:

But we talked about this in the two previous installments of this series so we will not repeat what has already been said. We prefer to go from one to what we have to do: the recommendations, understanding those things that in our opinion we can do to better face this 2020 individually, familially and collectively.

In this regard, what we will do next is to divide our recommendations into two parts. A first is not economic but rather personal / subjective / psychosocial, in the sense of what to do in the face of affections, thoughts and feelings to cope with what we are living and what will come. And then, we will then go on to the economic, simple and practical recommendations of things that we can do in the individual, family and collective spheres to better face the current situation.

We must give the collective battle if we really want to win the individual one.
It is evident that the situation the country is going through has psychological and subjective effects on everyone’s life. It is well known that consultations with psychiatrists, psychologists, alternative therapies, medication of all kinds, etc., are increasing. And also that many are affected by disorders ranging from anxiety to depression, either for not knowing what to do, for having lost something or someone (because they emigrated, died, etc.), or because income is insufficient and / or there are not enough hours in the day to generate it, because they are tired of all this, etc., but they must manage as they can, etc., for the simple reason that their pockets do not allow them to seek help or it is a luxury of time that they can not enjoy because others depend on them.

But since this is a very sensitive issue that requires specialized treatment (and that, unfortunately, as with everything else, polarized conflicting sides manipulate or underestimate at their convenience), a recommendation to better deal with these effects derived or enhanced by the situation is precisely not to individualize these problems, in the sense of not taking them as strictly ailments of each individual or as psychological problems isolated from their context.

This, of course, does not mean that professional help will not be sought in cases where it is needed and can be reached. Or that such or such therapies cannot help in certain circumstances. But the tendency to address these problems individually does not only usually increase anxiety in those who suffer it, but also overlooks collective or common social and economic conditions to (almost) everyone that, if not addressed and resolved, will not resolve the individual’s problems.

On the other hand, and this is very important, the issue with many of the current therapies is that they tend to isolation as a “solution”, in the sense that they seek to enhance the selfish side of each person by making them see that the problem is precisely the context, but instead of fixing it, what needs to be fixed in that context, the best thing to do is to run away from it, which in a few cases goes through leaving behind those who “ballast us” and lock ourselves in our own bubble. From this point of view, not a few of the individualized outings currently offered are sublimated versions of the “run for your life” for those who may be the one who has the means to survive, -who are never all- but less in the current circumstances and even less for those who have affections and ties to which to respond.

So, beyond the ethical aspects involved, we must try to reinterpret reality in such a way that we can understand what is ultimately true: that we are not alone, that we are not the only ones who suffer from insecurities, loneliness, anguish, fears, frustrations, rages. And that, on the other hand, at the end of the end, self-contemplation only leads to the typical middle-class confinement that ends up transforming fear into paranoia or a life similar to that of (former) addicts, whose condition to stay sober is to avoid all the surrounding stimuli and build your own “reality”.

In times of crisis, it is natural and understandable to want to “leave” or “isolate oneself”. From there, a good part of the migrations are explained but also the escapes from reality, so that we keep physically speaking in the same places. But those of us who cannot afford to leave in any way or those who decide not to do so, but who are also not connected to anything (nor to the State, nor to the opposing world, nor to a family fortune, etc.) nor do we adopt in cynicism as a style of life, what we have to do is face reality with our commons, leaving aside self-pity and focusing on changing the immediate and general reality, with the means we have and trying to construct them when we do not have them. As someone said: to difficult times you have to apply more politics and less prozac, we have to engage the collective fight if one really wants to win the individual fight.

**Finally, having said that, let’s move on to the economic issues, understanding that the foregoing largely depends on how we can resolve the vicissitudes of the current “self-regulation” phase of the national economy on a daily basis.

Number one condition to face the current reality: understand exactly where we are.
We said in parts one and two of this series that the Venezuelan economy and therefore society in general are going through a double process: 1) severe contraction, which means that it is getting smaller and smaller and leaving less space available for those who inhabit the country; and 2) transition to a state of affairs far removed from what we lived at the beginning of the current century. The highest level of government has defined this phase as “economic self-regulation” and our recommendation is that we must understand this literally.

That is to say: it is not true what certain leftist analysts argue that economies do not regulate themselves. Or in any case, it is a very partial truth: in fact they do. The problem is not exactly that. The problem is that this self-regulation consists of a process of socio-economic selection that discards what does not serve or is not so “efficient” and imposes the rule of the strongest. The dollarization is the best example: it is good for those who have dollars or other currencies (without considering their origin, which would be another debate). But not for those who do not have them, which is the vast majority and then they should try to do everything possible to catch the few dollars that can be caught so as not to die trying.

The self-regulations are winners vs. losers economies, where the state recoils and by decision lets everyone manage as they can. Some celebrate this as an opportunity for self-realization where the disappearance of the “paternalistic” state creates the possibilities of developing your full potential. It is the typical capitalist romanticization of the crises that used to be right-wing but also now is adopted by a certain “left.” Self-realization is fine, display your own potential, etc. But the statistical truth at the end of the day is that this becomes a grinder that disrupts the many and where a few survive in the midst of imposed and unleashed “viveza criolla” (native wit).

Condition two: get a variety of means of income.

By “means” what is understood is a set of things that allow you to survive. These can be productive, monetary, or both.

The issue is that you must diversify your sources of income since it is evident that one alone is not enough or is not safe. Try to find something you can sell or exchange or see what services you can provide. In our personal opinion, no matter how difficult it is to produce at present, it is worth doing and sustaining, because sooner or later the bubble of “bodegones” and imports will explode. On the other hand, there is a very strong tendency to provide services (as in the case of digital, from designers to community managers) but not to the material production of goods. The good side of that is that whoever takes the risk will have more ground to develop.

As for the monetary thing, the most advisable thing is that it is made of income in dollars: it is the best way to shelter and in the end, to survive.

As for the bolivars: do not abandon them, use them for regular expenses. The mantra is: pay in Bs / charge in $, to the extent possible obviously.

And as for the petro, it seems that the smartest thing at this moment is to let it “get fat” until the picture is clearer.

In any case: if you have a business, adapt your payment platform to a multi-monetary environment.

For those who have possibilities one option is to invest in cryptocurrencies. But what you should be aware of is that in our environment they present practicality problems when using them, especially in the interior of the country (deficient internet or electricity services). For the rest, if investing in cryptos, remember that you do not necessarily have to “mine” (referring to crypto mining): it is enough to do trading, which is to take advantage of price differentials when selling and buying between cryptos.