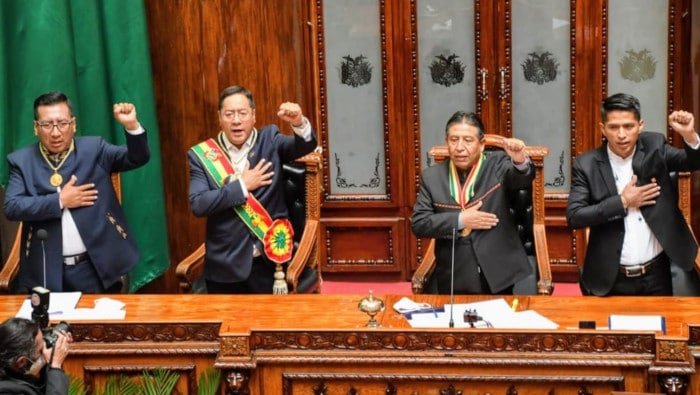 November 8, 2020-  In the first speech by Luis Arce as president of Bolivia, the new president promised to rebuild the South American country, after the de facto government during a year of administration destroyed the economy and democracy.

“In one year, all the conquests of the Bolivian people were reversed”, President Arce explained, as a way to give an account of the indicators that the de facto government left the Bolivian State in.

“The de facto government leaves an economy with figures that were not even seen in one of the worst crises that Bolivia suffered under the UDP (Democratic and Popular Unity) government in the eighties of the last century. Unemployment, poverty and inequalities have all increased,” he warned.

“Today we are here, to send a message of hope to all the nations that make up Bolivia, to those brave women and men who go out every day to fight to overcome this difficult situation,” he said.

“We will govern with responsibility and inclusion… with the objective of returning Bolivia to the path of stability, hoping to be like the Bolivian government of the people that rose to recover democracy”, he promised.

“We want to start a new stage in our history. Our government will seek to rebuild our homeland in unity to live in peace,” said the president.

“We will defeat the pandemic and the economic crisis, as we did before,” promised the economist, who in his message exposed a number of statistics to illustrate the critical state of the Bolivian economy.

“The pandemic was used to extend an illegal and illegitimate government,” he denounced, again alluding to the regime of the self-proclaimed President Jeanine

Áñez who, in his words, “mutilated” the fundamental democratic rights and liberties in the country.

“It is not hatred that drives our actions, but a passion for justice,” he exclaimed, paraphrasing the words of socialist leader Marcelo Quiroga Santa Cruz.

At the beginning of his message, Arce thanked his family for their patience during his term as Minister of Economy and asked for “five more years”, now as President of Bolivia.

He also remembered the victims of the massacres of Senkata, Sacaba and El Pedregal, which occurred a month after the coup d’état against then President Evo Morales, and stressed that they are symbols of dignity and resistance.

“By your mandate, I assume the presidency with much humility and responsibility… I look at the past and find all that we lived through and overcame. I raise my eyes and see hope,” he admitted and then closed with a call: “Let’s walk in peace, side by side to achieve it. Let’s move forward,” he said.

At the conclusion of the ceremony, Vice President Choquehuanca called the special commission to accompany President Arce to the Casa Grande del Pueblo, where he received the international delegations that came to the inauguration ceremony.