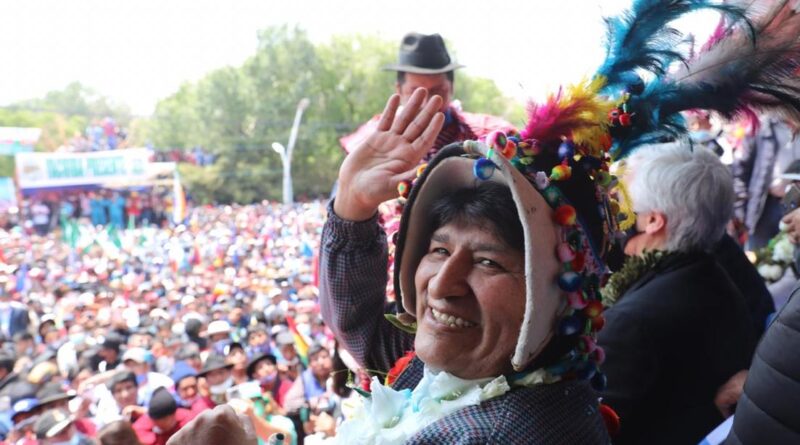 The indigenous leader and former president of Bolivia, Evo Morales, this Monday, at 10:09 a.m. (local time), crossed the border between Argentine and Bolivian territory, specifically at the border city of Villazón. “Evo Morales, return to your homeland, from which you should never have left , nor have been mistreated as you were,” said Argentine President Alberto Fernández, who accompanied him to the line that divides the two countries.

For his part, Morales said that he felt “the peoples and the great homeland” accompanied him with the support of Fernández. “These are moments of great emotion and deep gratitude to my Argentine sisters and brothers,” he stated.

In Villazón, a crowd was waiting for him. Morales delivered his first speech on Bolivian soil after spending a year in exile.

“I did not doubt (that) I was going to return, but I wasn’t sure that it would be so soon, (this is) something historic, something unprecedented,” said the former president to the audience.

“Cemetery or USA”
Morales was out of Bolivia since November 11, 2019. That night he left his homeland and, after twelve hours of travel, arrived in Mexico the next day.

The Mexican authorities, in coordination with other countries, acted to help the former president after the coup against him. The government of Andrés Manuel López Obrador offered him political asylum for “humanitarian reasons” and sent a plane from the Mexican Air Force to take him out of Bolivia. A month later, he took refuge in Argentina.

This Monday, before the crowd, Morales revealed the reason why he decided to leave the country. “Someone told me: ‘Evo, you’ve abandoned us.’ I said: ‘If I stayed, I had two paths: the cemetery or the US.’ Sisters and brothers, at that ultimate moment we decided to retire to safeguard our life,” he said, hinting that he could have been killed, or imprisoned, or brought to the country to the north.

Indeed, during the past year the de facto government authoritie, installed after the coup d’état, initiated legal proceedings against the former president for the crimes of sedition and terrorism. They also heavily repressed thousands of Bolivians who took to the streets demanding the return of democracy. The massacres in Senkata and Sacaba are sad reminders of that repression.

At the end of October, after the triumph of the MAS, both the accusations and the arrest warrant against the ex-president were annulled, in compliance with the president of the Departmental Court of Justice (TDJ) of La Paz, Jorge Quino.

“They failed,” there was no fraud
In his speech, Morales recalled that the political crisis in Bolivia, which caused his departure from power, originated after he was reelected on October 20, 2019. His victory caused discomfort in sectors of the Bolivian right and extreme right and they started violent protests in much of the country; demonstrations that were fueled by the pronouncement of the mission of the Organization of American States (OAS) who, in their preliminary report, urged a repeat of the elections and alleged concerns of fraud.

In this regard, Morales considered that the recent victory of Arce confirmed that “there was no fraud last year,” and asked the judicial authorities to release the former authorities of the Supreme Electoral Tribunal (TSE) who are being processed for that reason.

“Yesterday the MAS has returned to the government, now Evo is in Bolivia, they failed,” said Morales, who highlighted the fact that “democracy has been recovered without violence.”

“The right does not sleep”
When alluding to the coup against him, Morales attacked “the Bolivian right”, who he accused of being “accompanied, directed and financed” by the United States with the aim of “stopping” the process of change in the economy of the Andean country.

For the ex-president, his overthrow was caused by the actions of “groups that do not accept that the social movements and the indigenous movement can also govern,” and pointed out that the purpose was to overthrow “the economic model” established during his government, which included the nationalizations of hydrocarbons and all the country’s natural resources.

However, a year later he returned to celebrate a return to the path of the political process that he started in Bolivia. “Now we have to take care of Lucho as president, take care of our process of change. The right wing does not sleep, the empire is always looking at our natural resources, but with this experience, with more force, the time to cry is over, now we must organize ourselves,” he urged.

Before concluding his speech, he reiterated that his country has three reasons to celebrate: “One, Brother Lucho, president; second, Evo, Álvaro (García Linera) and all the refugees returning to Bolivia; and third, the gringo who gave us the coup (d’état) last year, now we give the coup to the gringo in the US, “he said in reference to the defeat of Donald Trump in the US presidential elections.