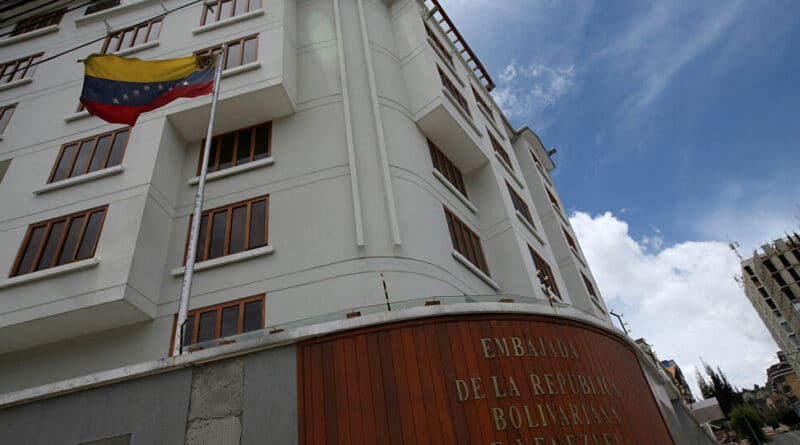 During one year of dictatorship led by Jeanine Áñez—who proclaimed herself “interim president” of the Andean country on November 2019—she recognized Juan Guaidó as “president in charge” of Venezuela, while the clan of accomplices of the opposition deputy expressly dedicated themselves to assaulting, stealing and looting all the assets of the Venezuelan embassy in La Paz.

According to the news platform La Tabla, the looting of assets of the Venezuelan Embassy in Bolivia was perpetrated “by Guaido’s ‘diplomatic representatives,'” referring to complaints published last August by Bolivian news outlets.

Part of the looting of the diplomatic headquarters was reported by the website Página Siete, providing details on the usurpers “selling at least ten cars, two motorcycles, two boats and a gym,” which were part of the embassy’s assets.

La Tabla adds that among the looters is also the “political advisor,” Arturo Vilar, “a journalist connected with police agencies in the ’90s, who managed the help in the escape of the former prosecutor (and fugitive from Venezuelan justice), Luisa Ortega Díaz, to Colombia in 2017.”

“In Colombia  Arturo Vilar was part of the team of Guaido’s ’embassy’ in Bogota with Humberto Calderón Berti”, quotes La Tabla, regarding who was “ambassador” of the false “interim government,” and who ended up leaving office to try to evade the scandals of theft of resources, drug trafficking, paramilitarism, prostitution, drugs, and luxury purchases, of Guaidó’s trusted team in Colombia.

The Venezuelan news platform explains that, for example, “data on the sale of vehicles from the embassy (from Venezuela to Bolivia) were confirmed by the PanAm Post portal,” a radical right-wing news website based in El Doral, Florida, belonging to relatives of María Corina Machado in the United States.

La Tabla explains that PanAm Post confirmed the sale of these vehicles “with its own sources” and also says that Vilar even mentioned Rafael Cáceres, Captain Henry Rivas and Maro Martínez as “diplomats of Guaidó in La Paz.”

Additionally, this Monday, November 9, after the Venezuelan authorities retook control of the diplomatic headquarters in Bolivia, it was found that the looting perpetrated by the Guaidó clan in La Paz also includes the theft of beds, a refrigerator, kitchen appliances, books, and between 100 and 150 works of art, all property of the Venezuelan Embassy.