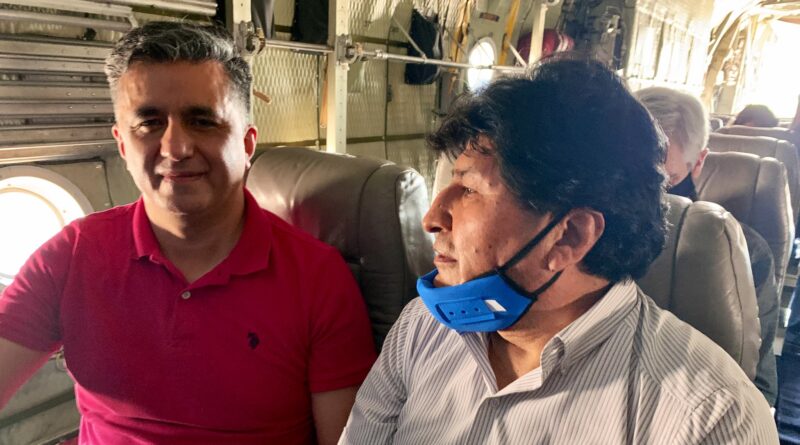 In the next few hours the former president of the Plurinational Republic of Bolivia, Evo Morales, will return to his country after a year in exile. Morales is travelling from the city of Buenos Aires, where he had been since December 12, 2019, following a brief layover in Mexico.

This was announced by the former ambassador of Bolivia to the United Nations, Sacha Llorenti, through his Twitter account, where he indicated that he was with Morales on the plane at the time of takeoff to the province of Jujuy, in the border region of Argentina. In the photo they can be seen inside a plane. In another tweet Llorenti wrote that he’ll make a travel diary of his journey with Evo Morales to La Paz.

In another tweet, posted by Kawsachun News, a video shows Evo Molares and his former vice president, Alvaro Garcia Linera, with a small group arriving at the San Salvador de Jujuy airport in Argentina. From there he will travel by land to La Quiaca, an Argentinian city almost 200 kilometers away, and then he enter Bolivia by the small town of Villazon, where a big celebration awaits him.

Evo Morales lands at the Horacio Guzman airport in the city of San Salvador de Jujuy, Argentina on his first stop on his way to Bolivia. He’s accompanied by former Vice President of Bolivia, Alvaro García Linera. pic.twitter.com/Xs9grf06PX

Evo Morales will return to Bolivia after the swearing-in of president of Luis Arce Catacora, candidate of the Movement for Socialism (MAS). Morales spent almost a year in exile in Argentina after being overthrown in a coup orchestrated by the Bolivian extreme right and the United States through the Organization of American States (OAS). The general secretary of this organization, Luis Almagro, led the coup by describing—without evidence—as fraudulent the elections of 2019, in which Morales was elected.

For his part, Morales expressed his gratitude to the Argentine people on his Twitter account for offering him shelter while he was in exile. He also reiterated his gratitude towards Argentinian president Alberto Fernandez, whom he said “saved his life.”