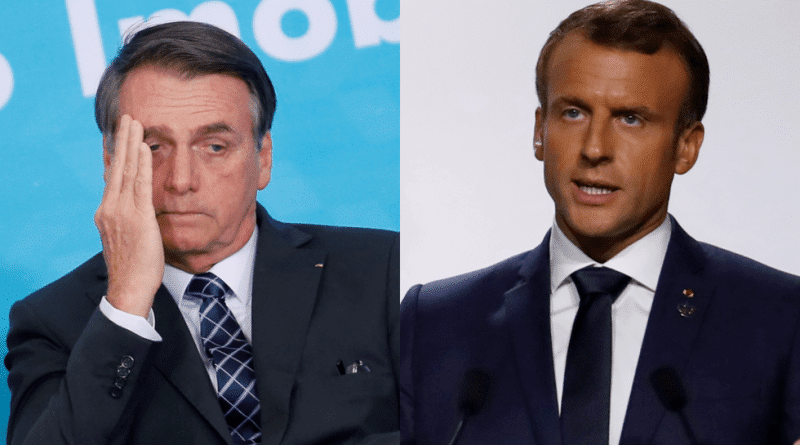 Brazilian President Jair Bolsonaro and his French counterpart Emmanuel Macron have escalated their war of words over the wildfires raging in the Amazon rainforest. This time, the insults got personal.

After posting a tweet last week declaring “our house is burning,” French President Emmanuel Macron promised to put the wildfires ripping through the Amazon at the top of the agenda of the weekend’s G7 summit in Biarritz.

The French leader accused Bolsonaro’s pro-industry policies of exacerbating the blazes, which are started every year by farmers to clear land for grazing and replanting, and claimed Bolsonaro had lied to him earlier this year about his efforts to combat climate change.

On Monday, Macron announced that the G7 had agreed on giving $22 million in funding to an international “alliance” to protect the rainforest, and offered to deploy the French military to contain the inferno. Earlier, Macron had also threatened to veto a trade deal between the EU and the Mercosur bloc, of which Brazil is a member.

RELATED CONTENT: The Amazon Rainforest is Burning as Bolsonaro Fans the Flames

Absent from discussions in France was Bolsonaro, who shot back in anger on Twitter. Accusing Macron of “unreasonable attacks,” Bolsonaro said the G7 was talking about “saving” the Amazon “as if we were a colony or no man’s land.”

“Respect for the sovereignty of any country is the least that can be expected in a civilized world,” he added.

When it comes to civility, however, Bolsonaro himself came up a bit short, insulting the French president and his wife in a Facebook discussion with one of his supporters.

“Do not humiliate the man hahahah,” the Brazilian leader said, after someone posted an unflattering photograph of Macron’s 66-year-old wife Brigitte, along with the quip, “Now you understand why Macron is persecuting Bolsonaro?”

I didn’t believe it’s real. But yes, the President of the world’s fifth most-populous country, in the middle of the worst crisis of his presidency, is reading through his Facebook comment section and joining in with random followers to mock Macron’s wife. https://t.co/vPRVWmyquI

“It’s sad, it’s sad first of all for him and for Brazilians,” Macron said. “Brazilian women are probably feeling ashamed of their president…I hope they will very soon have a president who is up to the job.”

In the face of Macron’s climate crusader comments, Bolsonaro has remained insistent that his government is doing enough to fight the fires, which he says are not without precedent.

While 83 percent more fires have been spotted from space in 2019 compared to last year, NASA reported last week that the number and severity of fires were average for the last 15 years.

While the Amazon wildfires have dominated media coverage due to attention from celebrities, influencers, and world leaders, environmental problems in France have stayed under the radar. ‘Yellow Vests’ protesters gathered outside the Biarritz summit accused Macron being “all talk” on environmental issues.

A June report by the French independent advisory council on climate showed that the government was falling well short of the emission-cutting goals it had set for itself. In addition, protesters say the new CETA EU-Canada trade agreement will lower environmental standards.

Macron has faced similar criticism before. Ecology Minister Nicolas Hulot abruptly resigned a year ago, citing the government’s failure to stand up to lobbying and give priority to climate change, threats to biodiversity, and toxic pesticide use.

Ironically, the Yellow Vests protests began 40 weeks ago when Macron attempted to raised the taxes on fuel last November to pay for environmental concerns. Diverting attention to the situation in the Amazon is surely a safer bet.