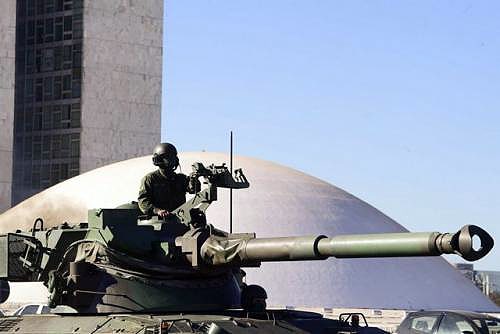 There is no longer any doubt that Bolsonaro is plotting a coup in the increasing probable scenario that his chances of being reelected in next year’s elections are very remote. After the successive and innumerable attacks made by Bolsonaro to democratic institutions, nothing indicates that he is going to stop, and that, on the contrary, he has already crossed a long time ago a behavior tolerable and worthy of his presidential credentials. In one of his latest appearances, he threatened to suspend the Constitution if the electronic ballot was not eliminated and replaced by the printed voting system. He also insulted the ministers of the Federal Supreme Court (STF), calling them protectors of corruption and other epithets that are not worth getting printed.

While the majority of the Brazilian population was expecting a forceful response from the principal representatives of the democratic institutions, they have remained in a worrying and demoralizing lethargy. Particularly notable is the case of the Attorney General of the Republic, Augusto Aras, who has become a sort of lackey to the former army captain turned president, freeing Bolsonaro from any blame in this long and exhausting sequence of unconstitutional acts that he has committed. This has even provoked the revolt of the deputy attorney generals, who have circulated a letter in which they accuse the Attorney General of not fulfilling his duty of ensuring compliance with the legal order, the democratic regulations and social interests. The letter—signed by 27 deputy attorneys general—points out that Aras as the Attorney General cannot passively assist the horrendous attacks that Bolsonaro is carrying out against the Constitution and the laws.

Meanwhile, the ruler continues to demonstrate that he does not intend to have a dialogue with the rest of the institutions of the Republic. On the contrary, everything leads to the understanding that he is already preparing the same script that Trump deployed during the US elections. Questioning the transparency of the electronic ballot system, denouncing the existence of a fraud that he has not been able to prove, warning from now on that he will not recognize defeat and threatening to mobilize the Armed Forces to have things his way, Bolsonaro is pressurring institutionality and is crossing the red line of legality.

The temporary tenant of the Planalto Palace has now provacatively paraded a contingent of armored vehicles, trucks and tanks through the Esplanade of the Ministries in Brasilia, passing by the National Congress building, in an act of clear intimidation carried out precisely on the same day that the Chamber of Deputies was to vote on the possibility of instituting the printed vote after the vote has been cast by the voter through an electronic ballot box. As the military vehicles passed by, some dozens of Bolsonaro supporters congregated to attend the parade, shouting words of encouragement for a military intervention with the former army captain at the head.

Either due to cowardice or for the mere interest of receiving contributions from the government in budget amendments, so far most of the deputies and senators have kept a complicit silence in the face of the president’s bravado. It appears that the “honorable” parliamentarians do not have the slightest suspicion that Bolsonaro’s intention is to close down the National Congress, the Supreme Federal Court, the Supreme Court of Justice, the Electoral Court, the Court of Auditors and so many other institutions the function of which is to monitor and sanction the excesses of the executive.

For the same reason, there should be an urgent reaction from these institutions and from all citizens to the crimes that Bolsonaro has been perpetrating, since it is already evident that neither he nor his followers have any will to respect the social agreements and legal norms that would allow the alternation of power and democratic and institutional stability. Brazil is facing a coup foretold and its main institutional actors display such cowardness and indifference that it can even be inferred that they are simply resigned to accompany the dying system until its definitive collapse. This is how the country has been since the time when the impostor “president” Michel Temer decided to betray Dilma Rousseff in 2016, and from that moment onwards one can verify how all the structures of the State are rotting away.

In the meantime, the extreme right has been appropriating some of the main nationalistic symbols and themes: the flag and the coat of arms, the national team jersey, the homeland, the family, the fight against violence, the anti-corruption fight, etc. But it is precisely this ultra-right wing that has also been destroying the democratic spirit that has been forged in the country since the redemocratization. With the liberation of the sale of arms, there are now armed militias throughout the country, which are already on the warpath in the face of a very likely defeat of Bolsonaro in the next elections.

Although Bolsonaro is sometimes portrayed to us more as a braggart than as a dangerous authoritarian leader, the truth remains that democratic institutions need to respond now with particular forcefulness to an act in which the Armed Forces are being used to intimidate those who wish the country to continue on its democratic path. Therefore, it is imperative to decisively eliminate the increasingly evident threats that in a short period of time Brazil could be transformed into a despicable tropical dictatorship.

Fernando de la Cuadra has a Doctorate in Social Sciences and is editor of the blog Socialismo y Democracia.