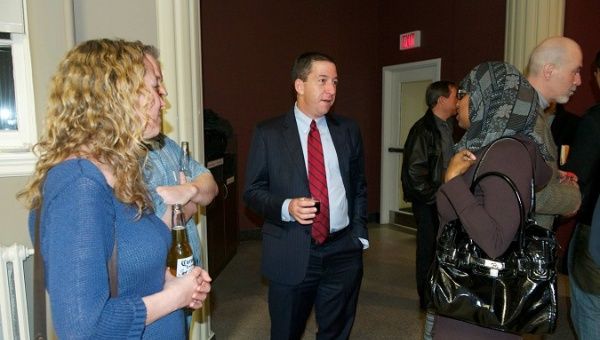 “I’ve lived in Brazil since 2005. I’ve been married 14 years to a Brazilian and we adopted 2 Brazilian children (11,000 Brazilian children are without parents). We created an NGO here for people in the street and abandoned animals I invest my life in the future of Brazil,” tweets The Intercept founder Glenn Greenwald.

Greenwald’s tweet was in response to threats of deportation by Brazilian far-right politician, Carlos Jordy. Last Sunday, Greenwald and a team of investigative journalists published an exposé in The Intercept outlining major judicial irregularities in the alleged corruption case against former President Luiz Inacio Lula da Silva that lead to his imprisonment since April 2018.

Jordy, congressional leader of the Social Liberal Party, says the U.S. journalist should be “criminally punished and deported” for the article. He and supporters even tried circulating a Change.org petition calling for Greenwald’s deportation until it was taken down from the Internet.

“The founder and editor of Intercept is a leftist, Lula’s friend and married to a [Socialism and Liberty Party ] congressman,” adding, “you cannot confront our institutions and authorities committing national security crimes and not imagine that you cannot be criminally punished and deported,” the PSL politician said in a series of tweets. President Jair Bolsonaro is also of the PSL.

A Congressman from Bolsonaro’s party explicitly threatening me with arrest and/or deportation for reporting on the massive improprieties of Bolsonaro’s Justice Minister and the prosecutors who imprisoned Lula. This is their prevailing mentality, laid out explicitly: https://t.co/aT8svbK2re

“Over the course of more than two years, Moro suggested to the prosecutor that his team change the sequence of who they would investigate; insisted on less downtime between raids; gave strategic advice and informal tips; provided the prosecutors with advance knowledge of his decisions, (and) offered constructive criticism of prosecutorial filings,” read the story.

After the case, Moro was appointed Justice Minister by Bolsonaro after his January inauguration, placing the judge in the newly created post that oversees the entire judicial system, among other powers.

Since the three-part article has been released over the course of the week, Jordy has been trying to get the nation’s lower house to summon Greenwald to a special hearing on the information in the article.

“Mr. Greenwald, do not think that you are an immortal being above good and evil. You practiced journalistic activism through a criminal act, which makes you an accomplice,” Jordy warned.

“A Congressman from Bolsonaro’s party explicitly threatening me with arrest and/or deportation for reporting on the massive improprieties of Bolsonaro’s Justice Minister and the prosecutors who imprisoned Lula,” retorted Greenwald over Twitter.

Regarding his eventual deportation, which would seem to be one of the Brazilian far-right’s hidden goals, Greenwald recalled that he has committed himself to the country’s wellbeing.

The Intercept journalist responded to Jordy by saying that his threats will not prevent him from doing his job.

“Dear lawmaker: although deployed threats such. as those, the U.S. and U.K. governments, the CIA, and so on, did not prevent our report on Snowden.Your smaller tyrannical attempts, intimidation and threats will not work either. Reporting will not be stopped. Better accept it,” Greenwald replied.

In an interview with AFP, the U.S. journalist also recalled that The Intercept team knew the publication of reports on very powerful Bolsonaro government figures would generate “a lot of hatred, animosity and threats.”