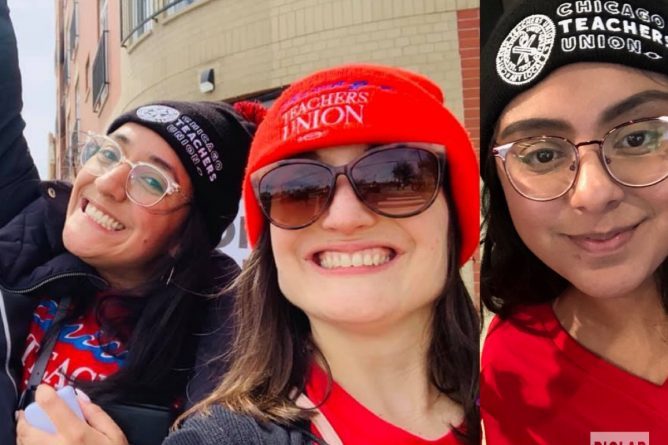 In a recent post on his facebook account Richard Berg wrote: “I am going to Venezuela with three CTU Charter School strikers. We will be meeting with teachers, union activists and people on the ground. Trumps embargo has made it very expensive. Please help the sister out.” The post direct you to  “gofoundme” where the delegation expect to raise financial resources to be able to overcome the high airline ticket prices.

Richard Berg is the Past President of Teamsters Local 743 where he was an activist in the Teamster reform movement for more than 20 years before being elected president. He was a member and union steward for the Teamsters while working in the Department of Environmental Services at the University of Chicago Medical Center. He has also worked as an Organizer for AFSCME, as a Business Agent for the Teamsters, as a Union Representative for SEIU Local 73 and a Staff Representative for AFSCME Council 31. He was also previously the Treasurer of the Chicago Area Labor Support Committee, Executive Board Member of the Chicago Chapter of the Labor Committee for Latin American Advancement, International Steering Committee Member of Teamsters for a Democratic Union, 30th Ward Coordinator for Harold Washington for Mayor in 1987, Staff for James Exum for 48th Ward Democratic Committeeman, Steering Committee Member of the Illinois Chapter of the Labor Party, Wisconsin Chair of the Midwest Coalition Against Registration and the Draft, Co-Chair of the Marquette University Coalition for Divestiture and President of the Marquette University Progressive Student Organization . Richard is currently working for the Chicago Teachers Union and serves on the Steering Committee for the Chicago Labor Speakers Club.

In the “gofoundme” website they give some insight about the delegation:

Who are we: We are rank and file teachers and strike captains (Valerie Vargas, Fabiana Casas and Sarah Chambers) from the historic Chicago Teachers Union (CTU) charter strike in May. We are going on a teacher delegation to Venezuela with Maria Moreno, the Financial Secretary of the CTU, and Richard Berg, a CTU charter organizer.

Why are we going: In the CTU, we passed a resolution in support of Venezuela and to oppose the USA invasion. We are going on this teacher delegation to Caracas, Venezuela to connect with the Venezuelan teachers, trade unionists and other Venezuelans around how we can support them and learn from their struggle. On our delegation, we would like to learn about the situation on the ground in Venezuela, so we can do a report back in the USA on what is really happening. Frequently, news in the USA promotes propaganda that is false and promotes the imperialist USA policies.

Orinoco Tribune contacted Richard Berg in Chicago and he indicated that the CTU has taken a very straighforward posture about Venezuelan current events and in that sense their rank and file were very interested in learn first hand about labor movement in Venezuela and the efects of the US unilattelar cohercive sanctions.

“We are interested in show solidarity with the Bolivarian Revolution and the Venezuelan people and at the same time we want to interact with Venezuelan labor union leaders with focus on teacher unions to learn from them how they have counter US sanctions and to inform them about our recent victories in the US, like the recent strike CTU organized in Chicago”, answer Berg to our request about the delegation.

You can contact the delegation sending an email to: richardberg@ctulocal1.org

Here is the last resolution from the Chicago Teachers Union on Venezuela: