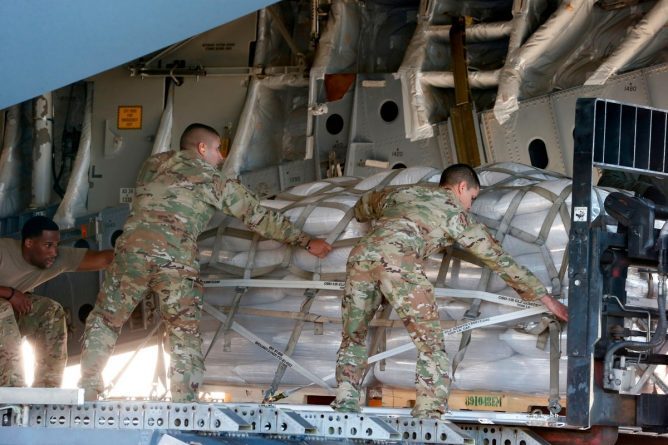 EDITORIAL NOTE: We do not share all the statements in this piece but we consider it relevant in terms of showing a military analysis on a very realistic US military threat against Venezuela.

President Donald Trump has been talking about ordering a military operation targeting Venezuela since 2017.

At first, that was widely dismissed as a rash threat, but the idea of a U.S. effort to force “regime change” in the oil-rich South American country may be gaining momentum in Washington.

“It’s a regime that, frankly, could be toppled very quickly by the military if the military decides to do that,” Trump said in September.

And on Monday, Secretary of State Mike Pompeo ordered all U.S. diplomats to leave Venezuela, saying their presence there “has become a constraint on U.S. policy,” hinting at opening potential military options.

Speculation about a military assault on Venezuela was also fueled by Trump’s recent appointment of a former George W. Bush administration official who was an architect of the Iraq War, Elliot Abrams, to be the new “Special Representative for Venezuela.”

Heightened concerns prompted the Democratic-led House Foreign Affairs Committee to meet Wednesday to debate a bill that would prohibit Trump from taking military action in Venezuela without congressional approval.

White House officials say “all options on the table,” including a military intervention or military support of allies in the region.

Get the military’s most comprehensive news and information every morning.Subscribe
Supporters point to the short, successful 1989 invasion of Panama.

But critics say that’s a bad analogy and caution that such a move could result in something resembling the Iraq and Afghanistan wars, in which anti-U.S. factions faced protracted insurgencies.

An invasion of Venezuela would require between 100,000 and 150,000 U.S. troops, who would face as many as 356,000 Venezuelan troops in a country twice the size of Iraq, said Rebecca Chavez, senior fellow at the Inter-American Dialogue, during testimony at the House hearing.

“It would be prolonged, it would be ugly, there would be massive casualties,” Chavez said.

The U.S. will withdraw all remaining personnel from @usembassyve this week. This decision reflects the deteriorating situation in #Venezuela as well as the conclusion that the presence of U.S. diplomatic staff at the embassy has become a constraint on U.S. policy.

Many experts believe the White House’s hawkish statements are not a sign of an imminent military attack but instead a signal to the Venezuelan opposition that the U.S. would support an internal coup.

“They’re not trying to provoke a war,” according to Fulton T. Armstrong, a former CIA analyst with significant Latin American experience.

“They’re trying to provoke the Venezuelan military to rise up and overthrow Maduro,” he said.

There appears to be very few advocates for military action outside the White House and many experts believe it is highly unlikely that the Trump administration would follow through on its seemingly threatening rhetoric.

“It would be completely counter-productive,” said Larry Korb, a former Pentagon official who is now at the Center for American Progress.

“This is a no-win situation if you go in. The damage would be much worse than any gains we might get.”

Nevertheless, the crisis is deteriorating rapidly. Refugees and defecting military troops are flowing into Colombia. Maduro recently blamed a massive electricity blackout across the capital city of Caracas on a U.S. cyber attack.

White House officials say the recent election of Maduro was a sham, fraught with corruption, and renders him an illegitimate leader.

Maduro and his allies in the government and military have plundered the nation’s cash from its vast oil reserves, watching its population starve and flee by the millions.

The U.S. has imposed economic sanctions against banks, canceled visas for Venezuelan government officials and taken other economic or political measures to pressure Maduro to exit.

Should Venezuela descend further into chaos, the White House could call upon traditional military operations, like targeted strikes, covert actions and fires, logistical and humanitarian support by U.S. troops in Colombia, Panama or in ships offshore.

“Desperate civilians always turn to the military, and say ‘solve my problems,’” Armstrong said. “And the military often doesn’t push back.”

While Maduro often talks about “a war of all the people,” involving mass resistance, a protracted war would be unlikely, said Armstrong, who is now a senior fellow at American University’s Center for Latin American and Latino Studies.

Armstrong added that an American invasion would certainly face snipers and bomb-makers, and it would be costly. But local Venezuelan groups like the colectivos — various gangs, some of which support Maduro — are mainly thugs who wouldn’t stand in the streets against the U.S.

Maduro is likely not the “key symbol that would unify people to resist U.S. military action and lead to a sustained insurgency,” Armstrong said.

“But the U.S. has selected in Juan Guaidó and others, people who have sworn to reverse ‘Chavismo,’” Armstrong said, referencing the poorly defined ideology of the deceased Hugo Chavez, which has at least on paper given the poor a voice.

“[It] may be a perverted voice, but they do have a voice,” Armstrong added. Some in Venezuela may fight to retain that.

So far, neither the White House nor the Pentagon has signaled what approach the U.S. might take to end the crisis.

“They keep saying ‘all the options are on the table,’ but they refuse to articulate them. That’s kind of weird, and we’re left to speculate,” Armstrong said.

One such speculation is that the administration will try to create a “humanitarian corridor” that would let U.S. troops enter a small area of Venezuela, possibly along the border with Columbia.

Another option could be a surgical strike on the presidential palace.

“But still, to achieve that you would have to provoke Maduro into doing something that you could say threatened U.S. interests,” Armstrong said. “The problem with U.S. military intervention in all of this is that none of this matters at all to U.S. national security.”

Among the other options would be covert tools or special operations missions that have been used before, and in particular by the current special envoy to Venezuela, Elliot Abrams.

The London Observer reported in 2002 that Abrams “gave a nod to” a failed Venezuelan coup attempt against Hugo Chávez that same year.

In August 2018, two drones allegedly carrying explosives detonated prematurely near a stage in Caracas where Maduro was giving a speech. Maduro’s regime alleged that it was the result of foreign meddling, while others have suggested it was a false flag operation.

“That sort of stuff, with the imagination of people like Elliot Abrams, who have engaged in and launched covert action, who misrepresented those covert actions to the U.S. Congress … in my humble opinion … would seem to be the more likely thing,” Armstrong said.

The Pentagon deferred questions beyond aid support to U.S. Southern Command. SOUTHCOM told Military Times that their assets devoted to Venezuela have been mostly moving humanitarian aid through airlift missions to Colombia via Miami.

“Since Feb. 4, 2019, the United States has pre-positioned hundreds of metric tons of critical relief supplies in Colombia and Brazil — procured both locally and internationally — to help tens of thousands in Venezuela,” according to an official response.

SOUTHCOM officials did not comment on accusations by Russia that U.S. special operations forces were staging in Puerto Rico in February for a possible military option.

The Army’s 7th Special Forces Group and the Air Force’s 23rd Special Tactics Squadron, as well as a bevy of other Air Force Special Operations Command aircraft, are located in Florida.

She told Military Times that having Abrams in that position puts pressure on Maduro, because Abrams signals a willingness to oust dictators.

The United States has had a checkered history in Latin America that dates back centuries, including a series of campaigns to control natural resources and covert actions that resulted in assassinations and coups or attempts across the region, the recent history has a different look.

Former SOUTHCOM commander from 2006 to 2009, retired Navy Adm. James Stavridis, now operating executive for The Carlyle Group, has written multiple times and spoken out about the Venezuelan crisis while also writing in January in Time magazine that, “a full-blown invasion by the U.S. would foment rage in the region and internationally.”

“There may come a time for more dramatic military activities, perhaps an international peacekeeping force. But for the moment, our efforts are best served by supporting the brave Venezuelans fighting the Maduro regime through the overall efforts of the international community,” he wrote.

The Navy’s longest running multinational maritime exercise is hosted by allies in the area. The UNITAS — Spanish for unity — exercise has been running since 1960 and partners a dozen or more nations a year for military training, sharing technology and best practices.

Currently, the United States has dedicated training and advising partnerships through the Pentagon with Panama, Colombia, Trinidad and Tobago, Brazil, Paraguay, Argentina and Mexico.

The task force is one piece of an early effort to create a Multinational Maritime Task Force for the region that would be on standby for missions ranging from disaster relief to security.

Retired Army Gen. Barry McCaffrey led U.S. Southern Command from 1994 to 1996 and oversaw operations in Panama handling more than 10,000 Cuban refugees. He continued a focus on the region non-militarily when he served as director of the Office of National Drug Control Policy from 1996 to 2001.

He remains engaged as a sometimes adviser on the region.

McCaffrey said the best options if military moves were going to be considered would be for a coalition of regional partners, such as the Organization of American States, to take the lead.

Though he doubted that OAS would get involved in any armed intervention within Venezuela, he said he could see their role in protecting neighboring borders and perhaps assisting in peacekeeping after Maduro is out.

And that is the best role, McCaffrey said: supporting Colombian and other regional allies through training, advising and logistical support within those borders, but not in Venezuela.