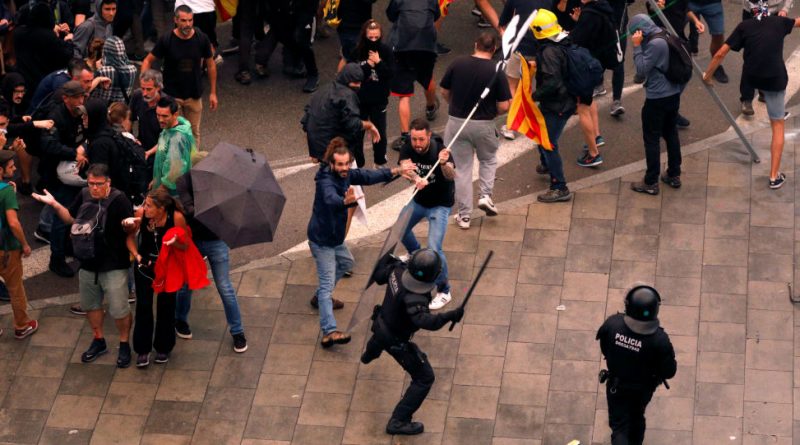 New clashes erupted between Catalan pro-independence demonstrators and riot police in the centre of Barcelona late on Tuesday over the jailing of nine separatists by the Supreme Court over a 2017 independence bid.

Spanish police shooting at protesters. This is Europe, this is Barcelona, this is Passeig de Gracia. Repression with unmatched force. #SpainlsAFascistState #TsunamicDemocratic pic.twitter.com/8S6NiePJZS

The protest turned violent after protesters set garbage containers and cardboard on fire in the middle of central Barcelona streets, including next to high-end commercial streets home to many of the city’s designer stores, according to a Reuters witness.

RELATED CONTENT: “They can not Even Form a Government in Spain But They Demand Elections Here”: Diosdado Cabello Answer to Josep Borrell

A spokesman for the regional Mossos police said three people had been detained near the local headquarters of the Spanish government, where police charged into the crowd with batons to try to gain space after there were problems with police fences. RELATED CONTENT: Spain Secretly Supported the War in Yemen With a Sale of Bombs to Riyadh

Thirteen people have suffered  injuries after clashes broke out between police and protesters in Spain’s Catalonia region earlier on Monday, following the Spanish Supreme Court’s sentencing of pro-independence leaders.

Festive moment at Barcelona’s airport during the demonstration against the Spanish judiciary repression of Catalan politicians and activist. #spain #EverybodysLand https://t.co/2ftHpeh7JE

On Monday protestors took Barcelona’s airport in a massive protest that was heavily repressed by the police.

Dear tourists: excuse the mess at Barcelona airport. The Spanish Monarchy is unleashing some fascist repression and beating people up as usual. Enjoy your vacation (or join the protests) #SpainIsAFascistState #Tsunamidemocratic https://t.co/6btMkrkKlB