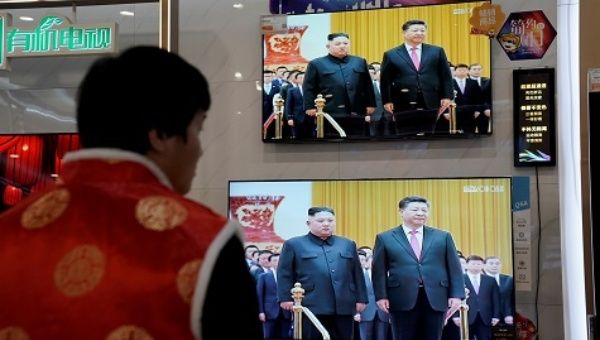 The Chinese President will visit North Korea on Thursday making him the first Chinese leader to visit in 14 years.

North Korean state media has reported Monday that Chinese president Xi Jinping will hold his first presidential visit to North Korea on June 20 to 21, at the invitation of its leader Kim Jong Un. Chinese state media confirmed the news.

The visit marks the first time in 14 years a Chinese head of state makes the trip to North Korea, the last Chinese president to visit was Hu Jintao in 2005. On the other hand, Kim Jong Un has met Xi four times since 2011. He has also met with South Korean President Moon Jae-in three times, U.S. President Donald Trump twice and Russian President Vladimir Putin once.

“Both sides will exchange views on the Korean Peninsula situation and push for new progress in the political resolution of its issues,” China’s state media CCTV reported, which also recalled that the visit comes along with the 70th year since China and North Korea established diplomatic relations.

The official visit comes amid tensions between the United States and North Korea over efforts to convince Pyongyang to cease its nuclear tests, as well as growing acrimony between Beijing and Washington over trade issues.

Following the failure of the Hanoi, Vietnam, summit on North Korean denuclearization between Kim and Trump in February, and a consequent freeze in the relations between both countries, Xi’s visit may signal that China is back in play in Northeast Asia power politics. Diplomats and political analysts have long awaited for this visit, especially as the G20 summit approaches.

The Chinese head of state might welcome a diplomatic success, such as prompting the North Korean denuclearization process. Such a step could grant him some leverage with Trump, who will also be attending the G20 leader’s summit in Tokyo at the end of June.