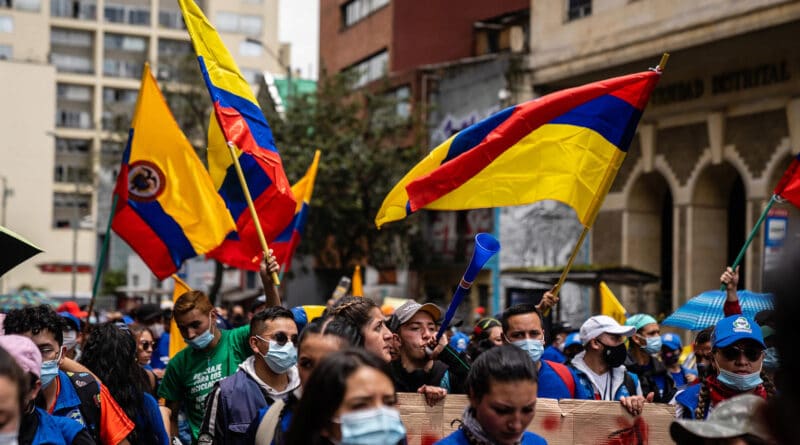 The national strike continues to be a topic of discussion in Colombia and the world, as are the repression and crimes of state terrorism of the government of Ivan Duque. That is why this week the Peoples’ Tribunal condemned the regime for genocide.

To speak about the current situation, we interviewed the leader of the Peoples’ Congress, Jimmy Moreno, who expresses the sentiments of those in the daily struggle to transform the country, with social justice and sovereignty.

How is the situation of the national strike? Is the same level of mobilization as last month still taking place?

We are now in the 51st day of the national strike, and the fact of arriving at this moment, clearly shows that the people are sustaining a dynamic of struggle and resistance. The strike has shown us that it has ebbs and flows typical of the struggles of our country. Although some sectors have stated that they are changing tactics, we see that the struggle is getting stronger in cities such as Medellin, Bogotá, Pasto, Bucaramanga, we see images of reorganization of the front lines in the strike. In Cali, the exercise of recovering the resistance has begun again. Although many sectors, especially the most organized ones, are following a different logic because they have other commitments, the people have understood that the strengthening of the national strike is the way to ensure the people’s proposals are won through the heat of the struggle.

In other words, the people continue to comply with the slogan that “the strike will not stop.” And this despite the great repression.

I would like to comment that the conditions have not changed: state terrorism is still strong, repression, persecution, the judicialization of social protest, the practices of the whole genocidal line of the state are still strong. This week the Colombian state has been condemned internationally for this genocide that is ongoing and that has been denounced, [for] all the assassinations of human rights leaders. Moreover, in terms of the conditions, we see the government is not listening, does not want to negotiate with the sectors interested in sitting down to talk and resolve this conflict. The agenda that is being carried out in the Congress of the Republic sends the message that the people are not being heard, and that the Congress will defend financial and political interests. On Wednesday, a proposal that would guarantee “zero tuition” was circulated in Congress that would benefit would benefit the student movement that has been demanding resources, budgets, decent education conditions, and quality education. Also, a proposal to protect fracking was issued, a technique that communities have been rejecting for a long time, and a mobilization process has been initiated in rural regions to defend the water and strategic ecosystems. The state does not listen to this, but through the machinery that governs, it benefits these interests. Parallel to this, we are demanding a reform of the justice system. We do not recognize this justice system here because it supports the rich, corruption and the mafia, who are evidently taking advantage of it. The Attorney General’s Office contradicts the government, the government says that there is no money, that it is necessary to make fiscal adjustment and reform, and Margarita Cabello, in charge of the Attorney General’s Office, speaks about making a series of reforms to create jobs, to feed the political electoral machine that works on behalf of these institutions, and not to investigate cases of corruption. A few days ago, the Attorney General’s Office shelved ten thousand cases that were under investigation for corruption, in the resource-extraction sectors. Thus we see that poverty is deepening in the country, the class struggle is intensifying, between the oligarchic, criminal, and murderous sectors, and the people.

Every day we see important dynamics and we believe that the organizing spirit that is taking hold in many regions of the country is essential. The people are self-convening, generating processes of their own governments, construction popular power. Thus, on June 6-8 we carried out an exercise that we call the National Popular Assembly, to strengthen this perspective that the communities have in which they are saying “we need to move forward and build our own national agenda,” with a vision towards building popular power.

We heard some criticisms, especially in Medellin, from those who are mobilizing, saying that the National Strike Committee was pulling back the mobilizations. Is that so or is it part of the ebullience and radicalization that occurs particularly in some processes more than in others?

Let us say that there are several actors playing a role in the dynamics of the national strike. One is the National Strike Committee, which includes the central workers’ organizations and other national organizations that have political and organizational dynamics. Another is the indigenous Minga, and finally this process of the popular assemblies, which include the front lines, popular organizations, youth, and delegates of the popular assemblies. Concerning the first scenario, a sector of the National Strike Committee has a view that this will be resolved within the electoral framework… in 2022, and sees it as a single scenario. They united and the Independent and Revolutionary Workers Movement (MOIR), held a press conference, not on behalf of the Strike Committee, but of their so-called “national unitary command,” which groups them together. They called for a change of tactics to diminish and dismantle the strike. This does not correspond to what was being discussed, not even in the national strike committee. In fact, the people understand that we have to strengthen the strike, the popular struggle, we have to consider how to demand that the government complies with the agreements and we have a broader perspective, the construction of the homeland, the construction of a different country. This generates discussions and tensions in the movement, which is diverse, broad, with different interests at stake, but we know that the people in their own dynamics, diversities and developments, are building ways to feed and sustain this national strike.

From what we have read, in this demobilizing line there are some politicians, including Gustavo Petro himself, who are betting on the elections and somehow trying to profit from this mobilization. It is a phenomenon that is repeated in other countries as well, in the face of large-scale popular mobilization, there are always some who are speculating, trying to take grist for their own mill. How do you see it?

There are leaders and organizations that are betting on the 2022 election. But we believe that this is not the only scenario, that the possibilities are not exhausted, because we know that the regime in Colombia is strong, it has control of the military forces and will not allow democratic and participative changes to be implemented. We know the criminal and murderous character of those who govern. That is why we have 80 deaths in the context of this national strike. We recognize these leaders, and we are being critical and self-critical of these positions. Not everything can be in pursuit of the electoral process, what we must do is to strengthen the movement, the popular struggle, the new organizational expressions, give a voice to the youth, to the front line, to those who resist, fight and strengthen the national strike. The leaders may be calculating, even the political parties and movements that group together sectors that support this position; their bases are also strengthening this movement and national strike. This dispute is taking place now from the institutional point of view, in the defense of the failed democracy and other mechanisms of participation. Meanwhile, there are strong sectors that are currently supporting the national strike and have a more long-term perspective, more strategic, and we believe that the political-electoral path would not help the disputes with the governments and the Colombian regime.

A few days ago there was an explosion in Cúcuta, which revealed, outside Colombia’s borders, that US military personnel from the Southern Command were being trained there, something that was already fairly certain, but it is always good to have proof… This explosion had secondary effects on that issue. On the other hand, Minister Molano and Iván Duque accused the ELN, the FARC or the “Peluso” of being behind it. What do you think happened in Cúcuta?

The fact is that this is happening in a context where the country is highly militarized and where the largest budgets are allocated to the country’s war, to intelligence. We do not know how these things happen, particularly in a military garrison. It is similar to when social leaders are assassinated in militarized territories and the police do not take any action, then doubts are generated about the actions. Another element is that before starting the national strike, Colombia was taking on an international role in which the United States wanted to invade the brotherly people of Venezuela. So, the strike delayed this plan of interference. What is happening in Cúcuta is evidence that US troops are present in Colombia, troops that are supporting a plan of interference, counterinsurgency, a plan against the popular social movement, and that is serious. It is a fact that is violating the sovereignty, the autonomy of the peoples and that proves that the Duque government and Uribismo are bowing to the interests of the United States. Beyond the fact itself, of this explosion, this car bomb, there are situations that are being investigated because everything seems doubtful. It is evident how the United States is a fundamental part of the construction of state terrorism and has the power to advance in interventionist plans that are beyond the interests of the United States in Colombia, but extend to our entire continent. It demands that we alert the peoples so that we can use the mechanisms of denunciation and solidarity to show how, from the popular struggle, we continue to fight against this common enemy, which is the imperialism of North America that seeks to continue dispossessing the peoples, and has the political, social and media control to develop these interests in opposition to our sovereignty.

Translated by Internationalist 360° and Orinoco Tribune