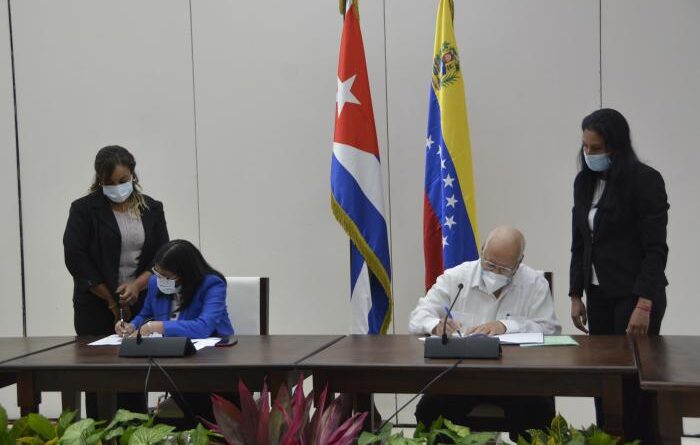 The Cuban and Venezuelan ministries of Agriculture signed an agreement, March 9 in Havana, to promote bilateral development in food production based on cooperation in the areas of livestock, fish farming, grain, legumes, tubers and high-protein forage.

The accord was signed during the 21st session of the intergovernmental commission in charge of the Cuba-Venezuela Comprehensive Cooperation Agreement, chaired by Cuban Deputy Prime Minister Ricardo Cabrisas Ruiz and the Bolivarian Republic’s Executive Vice President Delcy Rodríguez Gómez, who reviewed the challenges facing collaboration in 2021 and progress made on current projects, marked by an adverse political situation and the COVID-19 epidemic.

A new cooperation project was agreed upon to promote the expansion and use of moringa, thitonia, mulberry and other grasses for animal fodder in Venezuela, which includes the exchange of knowledge and production support in areas of agricultural management and agro-industrial transformation to manufacture animal feed.

Cabrisas Ruiz explained that the approved annual cooperation plan is directed toward improving key sectors such as health – with joint efforts to mitigate the effects of the pandemic and undertake actions for the development and application of Cuban vaccines – and to strengthen links in activities related to energy, transportation, education, culture and sports.

These projects, he emphasized, will serve as a foundation for the elaboration of a 2030 Resistance and Development Plan, based on an alignment of Cuba’s National Economic Development Plan through 2030 and Venezuela’s Plan of the Homeland through 2025.

The Venezuelan Vice President highlighted the two countries’ resistance in the face of the blockade and unilateral coercive measures imposed by the U.S. “Cuba-Venezuela cooperation has been essential to the victorious resistance of our peoples, who will not succumb to extortion or coercion, and will continue their path of victory into the future,” she stated.

The delegations, including several ministers from the two countries, reiterated their determination to advance in the improvement and expansion of cooperation in all spheres of development, to overcome the negative effects of the economic persecution that the United States maintains as a matter of policy meant to asphyxiate the two nations.