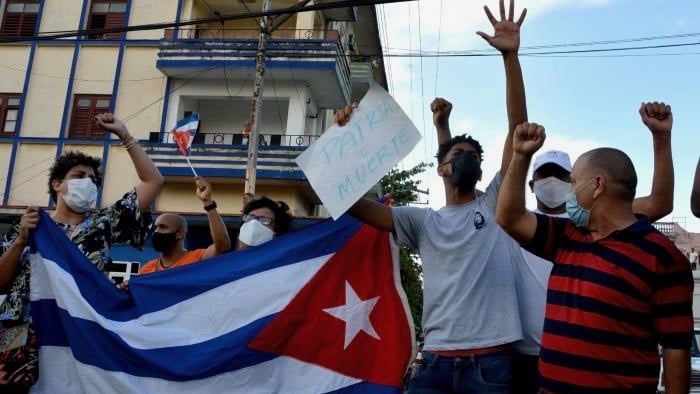 In the face of an ongoing destabilization attempt against Cuba, numerous political and social leaders and organizations have expressed their solidarity with the Cuban government and Cuban Revolution

Cuban President Miguel Díaz-Canel, on July 11, condemned the destabilization actions promoted by sectors of the opposition to generate chaos in the country. The head of state also rejected the smear campaigns of corporate media as well as the intensification of the illegal economic, commercial and financial blockade imposed by the United States against the country amid the COVID-19 pandemic.

The president addressed the nation on national television a few hours after thousands of citizens took to the streets to protest electricity cuts and a lack of medicine in the country. During the day, he visited San Antonio de los Baños, one of the municipalities where the protests broke out, and personally spoke with the residents. He recognized the protesters’ main points of dissatisfaction, but cautioned against those who seek to take advantage of the difficult circumstances of the people.

“The protests involve many revolutionary citizens who want an explanation for the current situation in the country, but are also contaminated by groups of opportunists who take advantage of the current crisis to undermine order and generate chaos,” said Díaz-Canel.

He said that the main instigators of these protests do not want any positive change for Cubans, but a change of regime to impose a neoliberal model. “In a very subtle, cowardly and opportunistic way, those who have always supported the blockade and serve as mercenaries and lackeys of the Yankee empire, appear with doctrines of humanitarian aid to strengthen the claim that the Cuban government is not capable of resolving this situation. If they really want to support Cuba, if they worry about the Cuban people, they should lift the blockade,” said the president.

He said that the intensification of the blockade has caused palpable material shortages, which can lead to an internal conflict, and therefore, pave the way for meddling by international actors. “They began to intensify a series of restrictive measures, a tightening of the blockade, of financial persecution against the energy sector with the aim of suffocating our economy and expecting that this would provoke the massive social outbreak that they desire. This opens up the possibilities for the entire ideological campaign… to call for humanitarian intervention that ends in military intervention and interference, and that affects the rights, sovereignty and independence of all peoples,” said Díaz-Canel.

RELATED CONTENT: The Hidden Hand of the US Blockade Sparks Cuba Protests

The president stressed that the government has been honest to the people and has repeatedly explained the complexities of the current situation to them. He strongly condemned that the US is taking advantage of the situation and is financing counter-revolutionary groups that are part of the protests and trying to foment opposition. He said that the state has “all the political will to dialogue” to resolve the crisis.

The president explained that due to the COVID-19 pandemic and the intensified US blockade, Cuba has been experiencing a shortage of medicines as well as electricity in the country. He said that the government is prioritizing medicines, healthcare and electricity services for COVID positive patients and COVID facilities. Since the country has been witnessing an upsurge in coronavirus cases in recent weeks, he added, the rest of the population is facing additional difficulties and shortages.

In response to the anti-government protests that took place in different parts of the country, hundreds of Cubans hit the streets to express their support for the government and the Revolution. Likewise, various people joined the call to place the national flag and banners of the 26th of July Movement on balconies and windows of their homes and offices, as tokens of support for the Cuban social process.

A massive nationwide mobilization in support of the administration of President Díaz-Canel has been called for today by various movements, collectives, organizations and trade unions.

Similarly, in the face of this recent destabilization attempt in Cuba and the exaggeration of protests in mainstream international media, numerous political and social leaders and organizations from across the globe have spoken against the pro-opposition media campaign and have expressed their solidarity with the Cuban government and Cuban Revolution.

International Solidarity
The secretary general of the Bolivarian Alliance for the Peoples of Our America – Peoples’ Trade Agreement (ALBA-TCP), Sacha Llorenti, condemned the interventionist actions against Cuba promoted from the US and rejected the accusations of the Secretary General of the Organization of American States (OAS), Luis Almagro, in support of destabilizing actions registered in the country. “Luis Almagro’s hands, stained with coups and blood, are once again trying to interfere in the internal affairs of Cuba. This interventionist agenda will fail miserably because the Cuban Revolution does not depend on anyone other than the Cuban people themselves. Long live Cuba!” wrote Llorenti in a tweet.

Bolivian President Luis Arce also expressed his support. “We express our full support for the Cuban people in their fight against destabilizing actions. The more the Cuba government advances in health and science, the more it faces misinformation and foreign attack,” he tweeted.

Mexican President Andres Manuel Lopez Obrador also stressed that “if the United States is concerned about Cuba, they must lift the 60-year-old blockade.”

Likewise, the president of the Simón Bolívar Institute, Carlos Ron, highlighted in a tweet that “although imperialism continues in its effort to ‘plague America with miseries in the name of freedom,’ it will collide with people who have a conscience and dignity that is not for sale. Long live the Cuban Revolution!”

The social movement counterpart of ALBA-TCP, ALBA Movimientos, also released a statement condemning the destabilization plans against Cuba. They highlighted that despite the blockade and continued attacks by the US it is the country that has the lowest rate of mortality from COVID in the world and has supported 50 countries amid the COVID pandemic to save lives and in support of humanity. Meanwhile, countries like Colombia, Brazil, Peru and Chile, the strongholds of the US-neoliberal project in the region, have some of the highest COVID mortality rates in the world. The platform stated that “The people of Our America and the world stand in active solidarity and support with the heroic people of Cuba and their revolutionary government.”

They called on people’s movements from across the continent to defend the Cuban embassies that are currently under attack by opposition and far-right activists in countries across Latin America.

The Network of Intellectuals and Artists in Defense of Humanity (REDH) called on people across the world to oppose US interventionism in Cuba and called on US president Biden to
“comply with the resolution rejecting the blockade issued on 29 occasions by the UN General Assembly” and to revoke the measures imposed by ex-president Donald Trump which intensified the blockade.

The US-based Party for Socialism and Liberation also rejected what they categorize as the “latest manifestation of an imperialist war to destroy Cuban independence and socialism”. They highlighted the legacy of US aggression against Cuba since the triumph of the Cuban revolution in 1959 including “terrorist attacks, CIA assassination attempts of its leaders, and a relentless and vicious economic war aimed at cutting off Cuban trade not only with the United States but the entire world.” The PSL maintains that these attacks have the objective to “inflict the greatest suffering on the people in the hope that would lead to counter-revolution.”

In a series of tweets, Progressive International denounced that “the 60-year-old US embargo, which has starved the Cuban people and deprived them of essential medical equipment amid a global pandemic, is inhumane, illegal, and highly unpopular” and stressed that “the time has come to end it.” The international organization recalled that “just last month, 184 nations representing roughly 94% of the world’s population demanded an end to the US embargo on Cuba, a form of economic warfare designed to create immense hardship and foment discontent.”