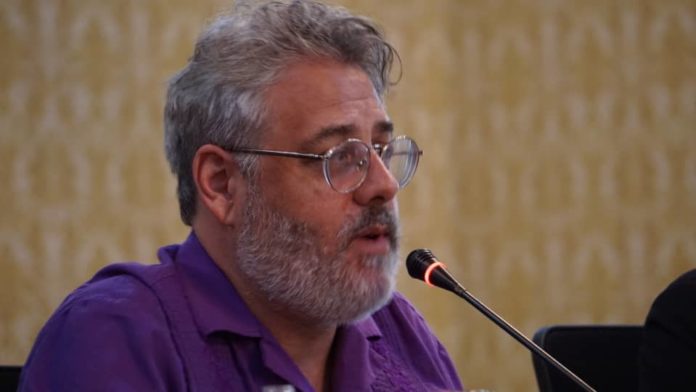 Dan Kovalik, lawyer, human rights activist and pacifist, asserted that “the story of Alex Saab is very important because it really exposes the lawlessness of the United States. The US put pressure on Cabo Verde to arrest, detain and extradite Alex Saab for the crime of helping Venezuela overcome sanctions that are in themselves illegal.”

Kovalik, who is also a writer, again denounced the persecution of the Venezuelan diplomat for his only “crime”—doing humanitarian work for Venezuela. “And that is why the world has to know about this, they have to be aware, and they have to move to change US policy,” he said.

Regarding the media coverage of the illegal abduction and subsequent detention of the Special Diplomatic Envoy of the Republic of Venezuela, Kovalik criticized the fact that the Western media “distort their actions— and propaganda works.”

In that sense, Kovalik, who arrived in Venezuela in the framework of the Bicentennial Congress of the Peoples of the World, pointed out that “we are here to try to explain what Alex Saab was doing, how he was helping Venezuela, in the toughest phase of the sanctions, to get food and to obtain fuel, and that is why he is being punished, but mainstream media are not covering that,” he said.

Venezuela, an example to the world
Regarding the initiatives that have emerged from the Venezuelan people to face economic sanctions, Kovalik expressed his amazement at the work that is currently being done to overcome illegal US and European sanctions.

“I visited plants like Kellogg’s, where Kellogg’s left the plant. They just showed up one day and said ‘we are closing’ and then the workers, with the help of the government, took over and started it up. But we also went to another plant, a paper plant, where the same thing happened, and now the workers are making it work, making school supplies.”

RELATED CONTENT: The Case of Alex Saab: US Abduction of Venezuelan Diplomat, a Global Challenge

The North American lawyer witnessed how Venezuelans “are using resources and supplies together to continue moving this country forward and continuing to meet the needs of the people, so it is very impressive.”

Finally, Kovalik considered that “the United States will continue waging an economic war in the form of sanctions against countries like Venezuela to try to overthrow their governments. However, what I see are countries like Venezuela, Nicaragua, Iran, Syria, North Korea, joining with other parts of the world like Russia and China to overcome these sanctions.”

Consequently, the human rights specialist argued, as a result of its own coercive measures “the US is going to sanction itself outside of the world economy, countries are going to stop using the dollar and are going to use other currencies. We already see that this is happening and therefore, I believe that this is how sanctions will be completely undermined by themselves,” he concluded.