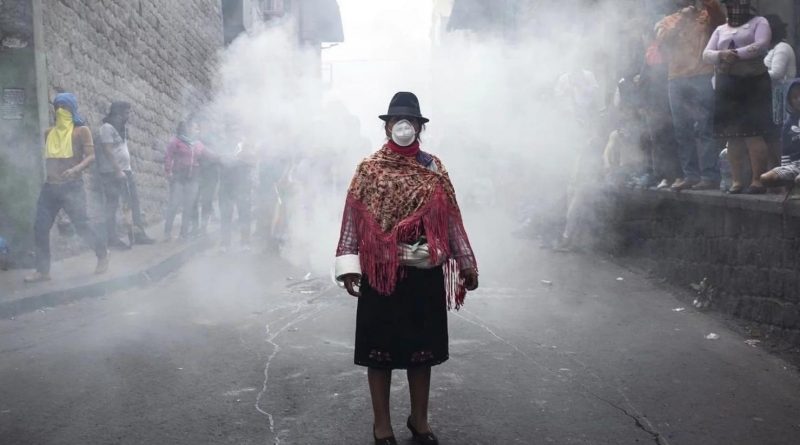 Ed. Son of Sandinista founder Carlos Fonseca and a leader and thinker in his own right, Carlos Fonseca Teran compares and contrasts the attempted coup in Nicaragua last year with the just ended popular uprising against IMF structural adjustment policies in Ecuador. For those who have not followed Ecuador, under President Rafael Correa (2007-2017) Ecuador was considered part of the Pink Tide of countries leaning toward socialism in Latin America. Current President Lenin Moreno was Correa’s vice-president and was elected to succeed him on a platform of continuing Correa’s economic policies. Instead he immediately began privatizing the economy, reinstating neoliberal policies, and criminalizing Correa much like what was done to Lula in Brazil.]

In Nicaragua, the 2018 crisis was triggered by opposition to social security reforms replacing those the International Monetary Fund (IMF) wanted to impose. The government reforms were opposed to the interests of big business, and favorable to the interests of working people.

In Ecuador, the current crisis was triggered by the obedient application by the government of the policies dictated by the IMF to the detriment of the people and for the benefit of the big businessmen.

In the riots in Nicaragua armed groups attacked the police and supporters of the revolutionary process, as a result of which there were deaths on both sides. The number of deaths among the Sandinistas were higher than among the opponents.
In Ecuador the protests are carried out without the use of weapons (through October 11 there was no evidence of any protester being armed) and there are no violent attacks on government supporters. Government supporters have not demonstrated in defense of the policies of a shaky government that responds to the interests of the elites, unlike Nicaragua, where with a popular and revolutionary government, hundreds of thousands of citizens demonstrated in defense of their government and their revolutionary project.

In Nicaragua, the government called for dialogue from the very first moment of the crisis and, in order to create an environment conducive to it, provisionally repealed the social security reforms.

In Ecuador, the first thing the government did was to say that the measures applied remained firm.

In Nicaragua, as a sign of good will, the government sent the police to their barracks, which were besieged by violent armed groups. And with the police in their barracks, the number of deaths per day increased, demonstrating that the deaths were not the result of any repression.

In Ecuador, police forces have been active in permanently repressing demonstrators.

In Nicaragua, the armed and violent groups, taking advantage of the police in their barracks and the willingness of the Sandinista Front to engage in dialogue, and in collusion with organized crime, took possession of entire cities. They kidnapped their inhabitants, capturing Sandinista militants, torturing and murdering them. As a result of this, there were more deaths at the opposition roadblocks than in the street confrontations during the offensive to recover the cities and other strongholds of the armed opposition by dismantling of the roadblocks.

In Ecuador there have been no reprisals by demonstrators against government supporters, nor has there been armed and violent territorial control by government opponents.

In Nicaragua, after the repeal of the social security reforms, the opposition did not raise any other social demands because it is Sandinismo that has defended those demands. Social rights which were lost while the current opposition governed were recuperated by the Sandinista government through its policies. Those demands had been ignored by the neo-liberal governments of the time and the rights of the people were trampled underfoot.

In Ecuador the demonstrators made a whole series of social demands provoked by the neoliberal policies applied by the current government. Among those demands are:

-Restore fuel subsidies, recently eliminated by the government, thus provoking a strong rise in the prices of basic necessities;

-The re-application of taxes and tariffs to vehicles and materials that form the fixed capital of the big companies, which had been eliminated, the State ceasing to receive a great amount of resources that could be used in benefit of the most impoverished sectors.

-The maintenance of workers’ salaries and of the public employees’ thirty days’ vacation, which was recently eliminated; and repeal of a 20% reduction in salaries established for contract renewals and of the monthly donation to the State of a day’s salary by public employees.

In Nicaragua, opposition actions were financed by foreign agencies, among them the US Agency for International Development (USAID) and the National Endowment for Democracy (NED), which are used by the United States to destabilize governments not behaving in its interests. Big business, the right-wing media, the traditional politicians of the “sell-out” parties, and the leadership of the Catholic Church participated.

In Ecuador, the protests have been promoted by social organizations, trade unions, indigenous and other organized sectors of society, as well as by revolutionary political militancy, identified with the interests of the people. On the contrary, private enterprise, the right-wing media, right-wing politicians and their parties, and the Catholic ecclesiastical leadership support the government and repudiate the demonstrators.

In Nicaragua, destabilizing actions were possible thanks in large part to the manipulation of the media and social networks with false news and memes.
In Ecuador, the actions of the popular movement in rebellion against neoliberal policies did not arise from virtual reality, but from the true reality faced by the Ecuadorian people, with a brutal rise in the cost of living, among other social calamities against which that brave people rose.

In Nicaragua there was no situation that justified early elections; the government was always engaged in dialogue, which was repeatedly suspended by the opposition, and the Nicaraguan Constitution does not contemplate early elections.
In Ecuador, the Constitution provides for the holding of early elections in situations of national upheaval and even establishes the corresponding procedures.

In Nicaragua, the imperialist powers headed by the United States, as well as their international instruments such as the Organization of American States (OAS), publicly supported the opposition in its attempt to overthrow the Sandinista government.
In Ecuador it is the opposite: the reactionary forces of the world’s powerful support the neoliberal government and reject the actions of the popular sectors that claim their rights against the policies of the current government.

As we have seen, the differences are profound between an attempt to violently overthrow a legitimate government that defends the interests of the people and the nation against the pretensions of imperialism, which tries to impose its will and intervene in the internal affairs of sovereign countries, and that of an unarmed popular rebellion, demanding rights curtailed by a government that defends the interests of the oligarchy and responds to the dictates of imperialism through organizations such as the IMF.

Almost all of the leftist governments that emerged in Latin America and the Caribbean since 1999 after the triumph of the Bolivarian Revolution in Venezuela emerged from popular struggle, rather than from electoral processes. These were rather the culmination of those struggles, the product of which in some countries neoliberal governments had even been overthrown (up to three presidents in a week in the case of Argentina, as well as different governments of that type in Bolivia, Ecuador and Brazil). In the case of Venezuela, there had been a patriotic armed rebellion of military forces committed to the ideals of Simón Bolívar, shortly after the massacre of a popular uprising by the very democratic government of Carlos Andrés Pérez, who in life was a great friend of the opponents described above.

It is impossible for the people to conquer power and start a revolutionary process if not through popular struggle, regardless of whether it later has political expressions of an electoral type, which in the current world political conditions are also necessary.

In the case of Nicaragua, for example, Sandinismo would never have returned to power without the accumulated popular struggles waged against neoliberalism in the seventeen years (1990-2006) in which the right wing governed our country in favor of the rich and the US, despite which Sandinismo never proposed to overthrow any of those puppet governments of imperialism which were similar to that of Somoza. But in the case of Somoza, conditions did not allow for a peaceful and electoral solution.

When there were popular uprisings in the nineties against the neoliberal policies, a certain correlation of forces was achieved. They negotiated to reach at least partially the popular demands that motivated those protests, and the popular forces demobilized temporarily by their own will and political discipline, contrary to what happened with the coup forces last year, whose only objective was the overthrow of the Sandinista government.

If Nicaragua defeated the forces of greed led by U.S. imperialism and succeeded in preventing them from overthrowing our revolutionary government, Ecuador will defeat those same forces, but in their case they are in government.

…through organized popular struggle, and led by a revolutionary political vanguard upholding a political program oriented to social transformations that guarantee the improvement of the life of the people through a just distribution of wealth and the exercise of political and economic power by the organized popular forces, under the guidance of a political force which lives up to the people to which it belongs and whose struggle it makes its own to conquer popular victory. The godchildren of imperialism and the traitorous rulers of Ecuador could not and will not be able to confront this heroic people mobilized in permanent and victorious popular struggle.

Until victory, always beyond, country, freedom or death. 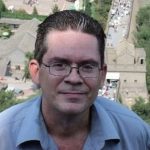 Son of Sandinista founder Carlos Fonseca and a leader and thinker in his own right, Carlos Fonseca Teran compares and contrasts the attempted coup in Nicaragua last year with the just ended popular uprising against IMF structural adjustment policies in Ecuador. For those who have not followed Ecuador, under President Rafael Correa (2007-2017) Ecuador was considered part of the Pink Tide of countries leaning toward socialism in Latin America. Current President Lenin Moreno was Correa’s vice-president and was elected to succeed him on a platform of continuing Correa’s economic policies. Instead he immediately began privatizing the economy, reinstating neoliberal policies, and criminalizing Correa much like what was done to Lula in Brazil.

Son of Sandinista founder Carlos Fonseca and a leader and thinker in his own right, Carlos Fonseca Teran compares and contrasts the attempted coup in Nicaragua last year with the just ended popular uprising against IMF structural adjustment policies in Ecuador. For those who have not followed Ecuador, under President Rafael Correa (2007-2017) Ecuador was considered part of the Pink Tide of countries leaning toward socialism in Latin America. Current President Lenin Moreno was Correa’s vice-president and was elected to succeed him on a platform of continuing Correa’s economic policies. Instead he immediately began privatizing the economy, reinstating neoliberal policies, and criminalizing Correa much like what was done to Lula in Brazil.