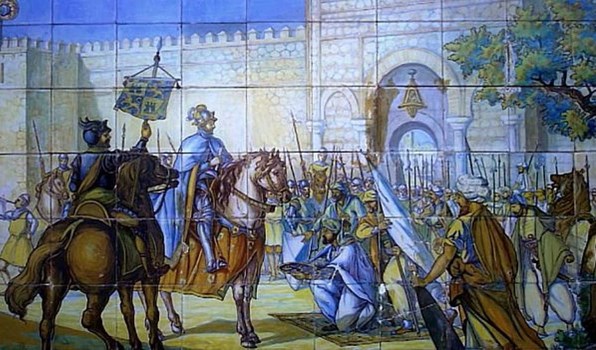 Jewish-Christian-Muslim monotheism is an inheritance and legacy of the ancient Arab-Semitic ancestral diversity.

Arab ancestrality was also preceded by a polytheistic splendor. It should also be noted that monotheism is not a notion that must be reduced to the Jewish-Christian-Muslim trilogy.

Cuneiform scholar Stephen Langdon showed that in the case of the Sumerian people (Iraq), monotheism preceded polytheism. The Egyptian pharaoh Anaketon had established the concept of one God. The Persians (Iran) developed a monotheistic vision, Zoroastrianism or Mazdeism that is still in force in that nation, and thus some other peoples.

From that millenarian Arab or Semitic ancestrality, from Ur (Iraq), the Hebrew people arrive in Palestine, in the journey (within the Middle East), it was customary for other peoples to join the caravan. And they are called Hebrew, referring to “those who came from the other side of the river,” the Jordan River.

His great contribution, among others, would be Jewish monotheism, and the Christian-Muslim monotheism that subsequently flowed from it.

That religious trilogy not only comes from the same ethnicity, the Semitic, that is, the whole sum of a diverse-ancestral that is now the Arab epilogue, but also in the religious, doctrinal and philosophical they keep the same root and trunk, of in fact, they are called Abrahamic religions.

Now those who expanded in the world were not the Jews, nor the Christians, nor the Muslims, but the respective religious doctrines.

Religious expansion occurs through conversion. The conversion of peoples has existed from polytheistic times to the present.

The mass religious conversion of peoples to the Jewish-Christian-Muslim monotheistic trilogy is clearly documented.

In very brief lines, the great conversions begin, in the case of Christianity, through the Roman Emperor Constantine by proclaiming Christianity as the official religion of the empire.

Grand Prince Vladimir III of Russia converts to Christianity and expands it through Russia and other countries. In America the European colonizer proceeded to what was called the evangelization of the beast (the indigenous) creating the conversion of these peoples to Christianity.

The European conversion to Judaism comes through King Bulan of the Khazaro Empire, from the North Caucasus, by declaring the Jewish religion as the official creed of that empire. The conversion to Islam initially proceeds through the Arabs and later through the Turkish-Ottoman (non-Arab) empire.

A previous displacement of Jews, Christians and Muslims is not ruled out. If there was a displacement of these, but very small in which it did not determine any mass conversion of the peoples to these respective religions.

At present, conversions continue but not at the village level, but rather in terms of spontaneous citizenship particularities, others through governments and / or ideological-economic groups that penetrate through associations.

The Christian religion that was born in Palestine and Syria, which is a Semitic or Arab legacy, today 94% of the world’s Christians are converts, they are not from those territories, from that geographical enclave, from the so-called Levant, the so-called Arab world or Semite. The Muslim religion that was born in the Arabian peninsula, today 80% of the world’s Muslims are converts, are not native to the Arabian peninsula and / or the Arab world.

The Jewish religion that was born in Palestine-Iraq and that is a legacy of Arab ancestry, today more than 98% of the world’s Jews are converts, they are not native to Palestine-Iraq or to Semitic universality.

Although the issue of conversion to Christian, Muslim monotheism is documented, illustrated and narrated with pedagogical transparency, in the case of the conversion of the Jews it is hermetically silenced, buried, hidden, camouflaged, aromatically censored to proceed to its falsification, that is, we were injected with the charming farce that the current Jewish converts descend from the ancient Hebrew Semitic people (of Arab ancestry).

That the genocidal establishment of the State of Israel in Palestine on May 14, 1948., is the return to the ancestral land after two thousand years of the Jews expelled from Judea by the Roman Empire in 70 AD., (although there is no record of this fact). To say this is a holocaust to universal history, to hide the colonial essence of Israel that was manufactured from Europe in 1948 in historic Palestine.

The massive conversion to Judaism began through the Khazaro Kingdom, an Eurasian people of Caucasian-Turkish-Mongolian origin, which later became a powerful empire coming to dominate southern Russia, western Kazakhstan, eastern Ukraine and areas of the Caucasus. In the seventh century AD King Bulan abandons polytheistic religious practices, from phallic cults for a conversion of his empire to Judaism, thus opening in the coming centuries the branching of European religious conversion to Judaism, now known as Ashkenazi Jews, Jews of Indo-European roots and nothing Semitic.

Ashkenazi Jews: -Its ancestors did not come from the Jordan, but from the Volga, not from the land of Canaan but from the Caucasus, which is still associated with the origin of the “Aryan” race, and are genetically related to the Huns, the Uyghur and the Magiar tribes and not with the seeds of Abraham, Isaac or Jacob.

In 1918. Authors of the book: -Eretz Israel, in the past and in the present-: They maintain: -The Palestinians are the true descendants of the ancient Israelites-.

Ashkenazis are classified as European Jews, of Caucasian, Slavic, Aryan, Indo-European roots. Ethnically no Semites (Arab ancestry) and represent 90%., for others 80% of the Jewish world population. The other Jewish group is Sephardic, many are natives of North Africa that are not necessarily Semites (Arabs) since North Africa is ethnically Amazinght and there are Sephardim from Spain and Portugal that are of Greco-Roman origin, not Semitic ( Arabic) and can represent about 20%. There is also a Semitic (Arab) Jewish minority called Mizrajíes (including Iran, not Arab but if native to the area), Mizrajíes can represent about 1% of the world’s Jewish population.

Injustice through the inclemency of the absurd

… Imagine the Indonesians, people of Oceania of Malaysian Austronesian origin, convert to Islam in the thirteenth century and today represents the country with the largest Muslim population in the world (210 million), ask for the right of return in the Arabian Peninsula, the cradle of Islam

We are in the 21st century and we remain trapped in the atrophy and anachronism of colonialism (Israel 1948). The academy and the intelligentsia, that neo-priesthood of our secular values, are precisely those who beatify an obscurantism by making the Jews seen as a people and not as a religion and in turn sanctify a concrete colonialism.

… and the Jews are not a people in the same way as Muslims and Christians are not either … neither are atheists, nor the gay community, nor whites, blacks, feminists, etc.

We are in the 21st century and the pathetic fear of expressing oneself before the sophisticated submission of Zionist Eurocentrism is chronic.

We are in the 21st century and they are the preachers of secularism, those who boast of wanting to dictate to us a chair of secularism but in turn venerate a regime that apart from being colonial, is sustained from the religious and non-ethnic condition.

A Jewish State, an Islamic State, a Christian State is an attack on all ethnic anthropology. It is contrary to modernity, it annuls the figure of the people … It is used to erase the figure of Arab peoples replacing them with confessional states, the end of the Arab peoples. Promoting confessional states in the Middle East, Islamic states, that benefits Israeli colonialism that now requests to be recognized as a Jewish state, and behind a Jewish state is to prevent the Right of Return of the millions of Palestinian Refugees and also be able to expel to the native Palestinians who live within that regime.

We are in the 21st century and we see that in regard to the Middle East, from the Western secular intellectuals and charismatic Arabs (think tanks), they mix, camouflage: people and religion, to justify the colonialism of that Israel of today that does not keep any historical or genealogical link with the ancient people of Israel. Equally to justify the monarchical Arab dictatorships (theocratic and non-theocratic) necessary in the mutual protection between the Arab dictatorships and Israeli colonialism.

We are in the 21st century and it is modernity that becomes an impeccable instrument of this religious inquisition, a secular academic-intellectual priesthood, in which, in its comfortable and negligent Orientalist illustration, it reverts to its historical obscurantism.

The Israeli is not only not an Israelite, but also an anti-Israelite who since 1948 has practiced an ethnic cleansing process against the Palestinian natives, the closest descendants of the ancient Semitic people (Arab ancestry) of Israel. The absurd turns out to be effective.