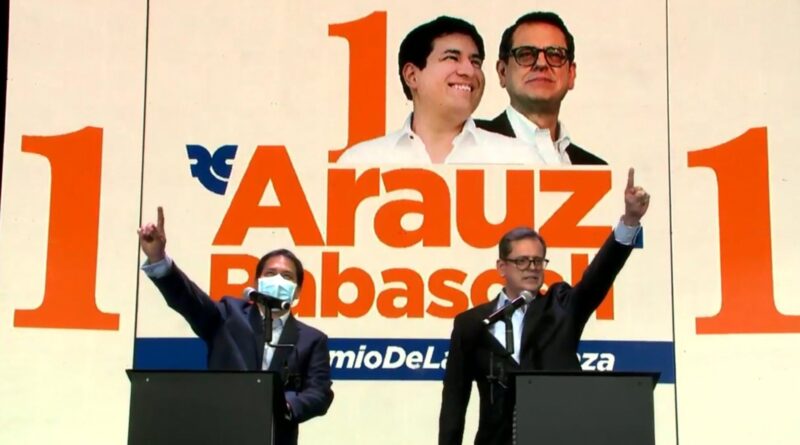 The international right-wing, led by their great conductor in Washington, has lined up all the big guns to try to block the triumph of the slate of Andres Arauz and Carlos Rabascall in the election in Ecuador, resorting to any possible means.  A phrase incorrectly attributed to Donald Trump, “All the options are on the table,” is as old as the history of those thirteen English colonies that became the United States when they freed themselves from England. In today’s world, one of these options, which I might call the preferred option, in the period of “soft power” (which is as lethal as the other kind, or more so) is the media artillery attack which the right-wing has available to them without space for opposing opinions.

It is well-known, although at times forgotten, that this is never a political force confined to national boundaries, but rather always in the service of a global strategy designed and orchestrated by the White House, in full consciousness that, in order to win the battle at a national level, it is necessary to locate that battle within the greater geopolitical global landscape where the United States can weigh in with all its influence.

RELATED CONTENT: Ecuador: “In this Election we are Deciding Between Life and Death”

This introduction is in regards to the fact that the Clarin newspaper of Buenos Aires has launched a campaign against Ecuadorian presidential candidate Andres Arauz. The latest attack was in the February 2nd edition, and was titled, in their customary over-ripe style full of malicious ambiguity, “In Ecuador, they claim that Rafael Correa’s candidate was vaccinated in Argentina with SputnikV.”

Unidentified sources pushed this unfounded version, intended to arouse popular reaction against the strange “privilege” enjoyed by the candidate of the Union for Hope (UNES – Unión por la Esperanza) Party, in a country devastated by the onslaught of the virus due to the ineptitude in dealing with the pandemic shown by the corrupt government of Lenin Moreno. I emphasize that this is “strange” since everyone knows that the Sputnik V vaccine requires two doses, something that the Clarin blurb is careful to sidestep. Therefore, not only does the fact that Arauz suffered a subsequent infection prove that he was not vaccinated in Argentina, but also, he would have had to be a very stupid person indeed to have got only one dose of a vaccine that requires two doses to be effective.

The most shameful part of the Clarin article is the lack of any verification or fact-checking of the information when they mention the political consultant Amauri Chamorro – “The connection, according to statements by sources linked to and part of the Center Democratic Movement, was the local political consultant Amauri Chamorro, who works within the campaign team, and who facilitated the contact with the Minister of Health of Argentina.”

Chamorro immediately contradicted this version in his Twitter account, stating that, “According to @Clarincom, I coordinated with Putin and Fernandez to vaccinate @ecuarauz against COVID19. I am grateful to the “free press” but this is FALSE.  In spite of the fact that half of Argentina has my cell phone number, Clarin never contacted me to verify or check this info, something that occurs habitually when the media tells lies.”

To sum up, we are in the presence of the umpteenth “fake news” story, made up to damage Arauz’s image. The source of the news, according to the newspaper itself, “was a conversation that was relayed by sources who preferred not to reveal their identity, who participated in a meeting of the top leaders of the Center Democratic Movement,” (an organization allied to the Union for Hope – UNES.) Pay attention to the fact that there is no identification of the source, nor any double-checking of the information, and not even the slightest care observed to take into account the chronology of the events that demonstrate that Arauz was infected by the virus after having traveled to Argentina and supposedly gotten vaccinated with Sputnik V. Nothing new under the sun: disgracefully, the prostitution of the dominant press in the service of imperialism and the super-rich of our countries produces this kind of “fake news” on a daily basis.

And they do it because they are aware that in Ecuador a battle is going on, and that, if progressive forces in that country achieve victory, this will strengthen and reinforce the processes of recovery of democracy and national self-determination in another South American country. None other than that country which was the headquarters of UNASUR!  Because of this, the only thing we can expect from the imperialist henchmen of the media are attacks of this type and all kinds of lies. Which means that Arauz is a very good candidate. That is confirmed by the fact his enemies are those who all honest and progressive politicians in Latin America should have against them. And that is why they are taking shots at him on a massive scale.