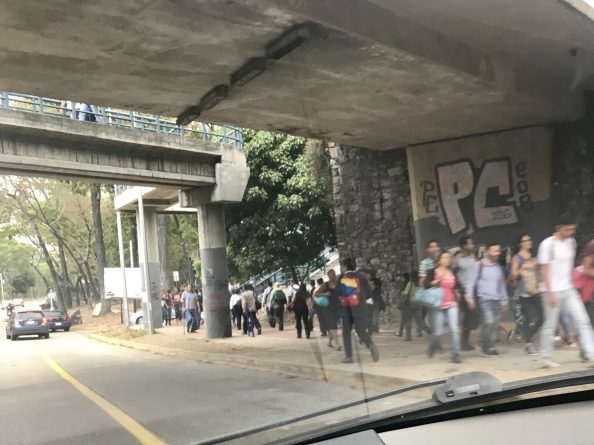 As some policial analyst warned, the new trend to be used for right wings factors in coming days will be the attacks against the already faulty public services in Venezuela in order to affect the nerves of Venezuelans already suffering from an economic crisis for almost 5 years.

Today around 5:05 pm Caracas time an electric blackout affected most of Caracas and according to reports from news outlets is affecting most of Venezuelan territory. Blackouts of this kind are common in the countryside of Venezuela but not in Caracas where, when it happens, only last 5-10 minutes.

Corpoelec, the public utility in charge of most of the electric service in Venezuela have not made an statement about the current event but the “Metro de Caracas” posted on its twitter account that their services in the three lines that serve Caracas are stopped.

After returning to Venezuela last Monday, the self-proclaimed Guaido announced a strategy to promote strikes and hold meetings with public servant unions that are mostly controlled by opposition activists. From another perspective, some analysts have announced that a new trend to be used by the US and its Venezuelan lackies will be attacks to public utilities in order to promote social unrest and protests on Venezuela. A tactic that has proven wrong in recent years but that under current circumstances might help them in the short run. Meanwhile, at the moment this piece is being finished, the electricity service in Caracas has not been restored (75 min) causing a great disruption in normal life and affecting millions of Venezuelans that at this time return home after work or school. Finishing this note,  in the twitter account of Corpoelec a tweet was posted stating: “They sabotaged the electric generation in Guri (main hidroelectric plant in Venezuela). This is part of the economic warfere. we won’t let them. We are working to restore the service”.