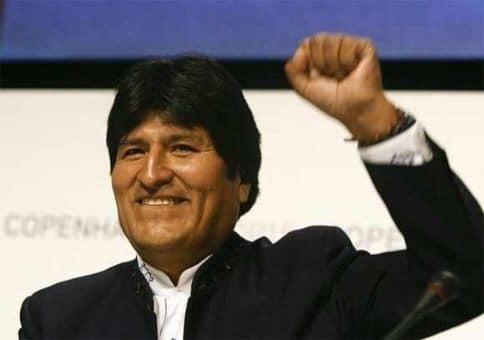 The president of Bolivia called the US to “learn to respect the law and withdraw from Iraq and Afghanistan.” Since 2014 US troops have been bombing Syria.

The president of Bolivia, Evo Morales, referred to the withdrawal of US troops from Syrian territory as a victory for the people of Syria and not of Donald Trump.

The indigenous leader also urged the US president to leave the lands of Iraq and Afghanistan.

“Trump sings victory by withdrawing his invading troops, deployed without authorization from his Congress or from the Security Council of the United Nations, but the true victory is of the Syrian people, worthy and sovereign. He must learn to respect the law and withdraw from Iraq and Afghanistan,“ President Morales wrote in his Twitter account. The withdrawal of US troops from Syrian soil was dictated by Donald Trump last Wednesday, after he announced the defeat of the terrorist group Daesh (also known as ISIS or Islamic State).

The US military presence in Syria is harshly rejected by the government of Bashar al-Assad and byother nations. Syria denounces the presence US troops in their country, which deepens the war and the humanitarian crisis. They also accuse the coalition led by the Donald Trump government of being responsible for the deaths of thousands of Syrian citizens since their arrival in 2014.