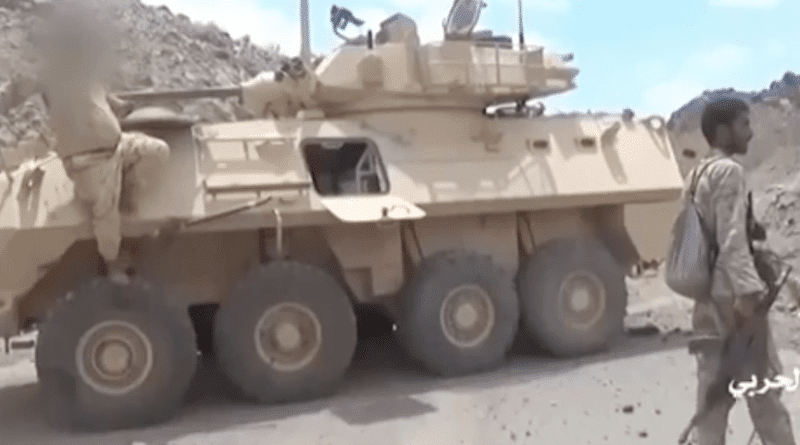 Yemen’s Houthi rebels have released video footage of the aftermath of a battle with Saudi forces which appears to show a captured Canadian-made light armored vehicle.

The footage was released Sunday in what the rebels say started as an ambush inside Saudi Arabia but then turned into a major cross-border battle. The footage of the battle was shown on Houthi-run Al Masirah TV and Al Jazeera.

The rebels claimed that the attack killed or wounded 500 Saudi soldiers. Saudi Arabia has not acknowledged the fighting and the Houthi claims have not been independently verified. The footage shows the captured light armored vehicle, another destroyed light armored vehicle as well as armored trucks provided to the Saudis by the U.S. company Oshkosh. The footage also showed Saudi troops who were taken prisoner.

Over the years, Saudi Arabia has purchased light armored vehicles from Canada’s General Dynamics Land Systems-Canada in London, Ont. In 2014, the then Conservative government announced a deal worth an estimated $15 billion to sell Saudi Arabia more than 700 light armored vehicles. That controversial deal was later approved by the Liberal government.

A Saudi-led coalition, which has been provided with arms and intelligence from the U.S. and other western nations, intervened in Yemen in 2015 after the Houthis overthrew the government. Saudi Arabia has faced severe criticism for its role in the ongoing war in Yemen, with allegations it has conducted unlawful airstrikes on civilians.

Besides the armored vehicles, the video shows large amounts of captured small arms. It is not clear whether the Houthi forces took possession of the armored vehicle or left it at the ambush site. Houthi spokesman Brig. Gen. Yahya Saree told Al Masirah TV that the captured soldiers were moved to “secure places.”

The fighting lasted for 72 hours, he added.

Doug Wilson-Hodge, spokesman for General Dynamics Land Systems-Canada, said the company is declining to comment on the footage.

The Houthi rebels claimed more than 200 Saudi soldiers were killed in the battle. The fighting took place in the southern region of Najran.

The Liberal government launched a review of the light armored vehicle contract after the murder of journalist Jamal Khashoggi inside the Saudi consulate in Turkey. Earlier this year a United Nations report determined that Saudi Arabia was responsible for the killing of Khashoggi who was a critic of that country’s regime.

A dozen organizations sent Prime Minister Justin Trudeau a letter earlier in August, questioning the status of the review and pointing out that no updates on progress have been provided. The lack of such information has brought “the sincerity of the effort into question,” according to the letter endorsed by organizations such as Oxfam Canada and Amnesty International.

The Saudis have also fallen behind in their payments for the light armored vehicles received from General Dynamics. It was revealed in December that the Saudis owed Canada more than $1 billion for vehicles already delivered.

In August, the Liberal government announced it would provide General Dynamics with a $650 million repayable loan. It also signed a $2 billion sole-source contract to purchase 360 additional light armored vehicles from the company.

Industry representatives say that deal was designed to help the firm handle the decision by the Saudis to withhold payment for vehicles already delivered as well shore up Liberal election fortunes in London area ridings. The armored vehicle project for the Canadian Army was originally announced by the Liberal government with an estimated cost between $500 million and $1.5 billion. The plan was to award the contract in 2023 after a competition. But that competition was jettisoned in favour of the sole-source deal with General Dynamics.

Last month Houthi forces took credit for launching drone and missile attacks on Saudi Arabia’s key oil processing facilities, causing significant damage. But the Saudis and the U.S. claimed that Iran and not the Houthis were behind the attack. Iran denied that claim.