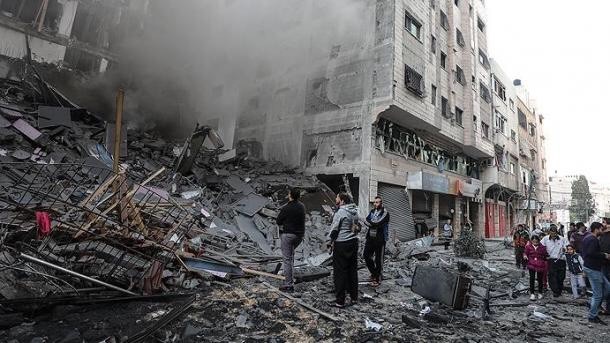 The Israeli army organized 865 air strikes in the Gaza Strip under the blockade in 2018.

In said report it was pointed out that from the Gaza Strip thousand missiles were launched to the border areas of Israel and the 250 were overcome in the air with the defense system “air dome” and the 45 fell in the places of residence.

The report also alleged that one from the sea, 15 tunnels were opened to Israeli lands from the Gaza Strip.

In 2018, in activities targeting Israeli targets, from the West Bank and the Gaza Strip, 16 Israelis, 7 soldiers, 9 civilians, and 199 others were injured.

The report gave information that in 2017 20 Israelis died in the activities organized by the Palestinians, in 2016 17 Israelis died.

The army in the report it published did not refered to attacks by Israeli forces targeting Syria, the Israeli Broadcasting Corporation stated that the Israeli army in 2018 organized 180 air strikes on Iranian targets and Hezbollah in Syria.

The Palestinians as of March 30, 2018 began to organize pacifist activities under the name “Great Return March” on the border of Israel from the Gaza Strip under the blockade.

Israeli soldiers open fire with plastic bullets to the civilian population that wants “the unjust lifting of the blockade practiced in Gaza from 2006 and return to the lands that were exiled.”

In the intervention of the Israeli soldiers to the pacifist demonstrations that continue as of March 30, more than 225 Palestinians died. In the same period in the air raid organized by Israel on Gaza and tank gunfire, 14 Palestinians lost their lives.