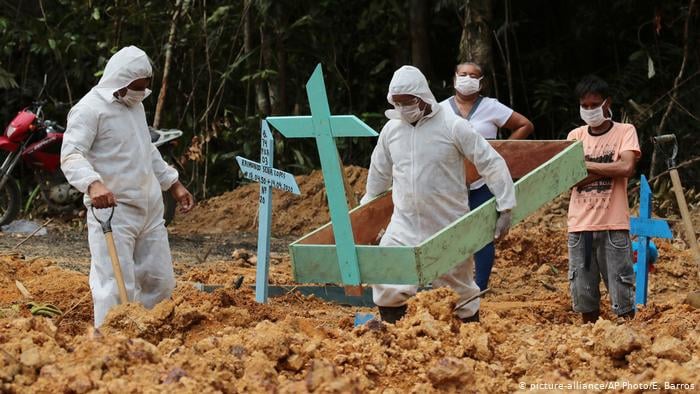 107 doctors and 14,000 oxygen tanks have been sent on a humanitarian convoy to Manaus, Brazil.

Mérida, January 18, 2021 (venezuelanalysis.com) – Venezuela’s self-declared “Interim President” Juan Guaido has allegedly refused to use funds under his control to purchase additional COVID-19 vaccines for the country.

According to documents seen by Reuters, Guaido’s team turned down overtures from the Venezuelan Central Bank (BCV) to free up US $120 million worth of frozen assets in the UK. The BCV reportedly proposed bypassing the US blockade and purchasing UK-produced vaccines through the Gavi financing program, which looks to boost poorer countries’ vaccination programmes via the World Health Organization’s (WHO) COVAX system.

“The impact of the pandemic in Venezuela has worsened, and President [Nicolas] Maduro’s government has been unable to effect payment to Gavi to secure access to COVID-19 vaccines by any other means,” a statement from BCV lawyers Zaiwalla & Co. reads.

In response, Guaido’s legal counsel Arnold & Porter allegedly responded that “our clients cannot consent” to the proposal. Guaido’s team has since claimed that the response is a fake.

London and Washington continue to recognise Guaido as Venezuela’s legitimate leader, despite the opposition man being shunned by the European Union last week and his position as National Assembly president expiring.

The UK and US have frozen a range of Venezuela’s foreign-based assets, including US-based oil subsidiary CITGO and US $1.8 billion of gold stored in the Bank of England, with some of them having been transferred to Guaido’s “administration.”

Caracas’ efforts to use the UK-based gold for a UN-mediated purchase of healthcare equipment were similarly derailed last July, with Guaido contesting the BCV’s control of the reserves. The US-backed opposition sectors were revealed to be using funds under their control to pay loyalists up to US $5000 a month, while Guaido himself is currently facing a series ofembezzlement and corruption charges.

The seizure of Venezuelan assets has come alongside an escalation of US sanctions against the Caribbean country which also prohibit firms from trading with Caracas or processing payment for goods or services. Equally, the policy opens the way for secondary sanctions against any non-US firm or government dealing with Venezuela. The sanctions have been widely condemned by the international community and described as “collective punishment” by the Center for Economic and Policy Research (CEPR).

As a result, Caracas has been increasingly forced to turn to international intermediaries, including the WHO, the Pan-American Health Organization and the United Nations or allied countries, to oversee payment or swap deals to acquire goods including vaccines.

To date, Venezuela has only managed to purchase Russia’s Sputnik V vaccine, which was formally authorised for use last Wednesday and is expected to be rolled out before April. The Caribbean country identified 497 morecases and five deaths on Sunday, bringing the total to 119,803 cases and 1,105 deaths.

International solidarity against the pandemic

Despite a recent increase in coronavirus cases, Venezuela continues to suffer far less than its neighbours, many of whom are beginning to apply a range of vaccines.

During a high-level delegation to Cuba over the weekend, Vice President Delcy Rodriguez reiterated calls for the Bolivarian Alliance for the Peoples of Our America (ALBA) to create a vaccine bank for the benefit of member countries. While in Havana, she also announced that a bi-national observatory is to be formed to evaluate and counter the impact of Washington’s “illicit and illegal” unilateral coercive measures against both nations.

Likewise, a National Scientific Centre for Ozone-therapy was inaugurated in northern Caracas on Sunday, which Maduro described as a “pioneering project for Latin America.” The centre will reportedly look to “develop the application of ozone-therapy as a complementary medical treatment for different pathologies, with special emphasis on COVID-19.”

Venezuela also took action to assist in an escalating COVID-19 emergency in the Brazilian city of Manaus over the weekend under the banner of “Latin American solidarity before anything else!”

The isolated city in the bordering Amazonas State, which has difficult communications with the rest of Brazil but houses 2 million people, has been overrun by COVID-19 in recent days, with Reuters reporting that its healthcare system is “at breaking point” and that mass graves are being dug. AFP has quoted on-the-ground scientists as saying that “oxygen tanks have run out and some hospital units have become a type of suffocation chamber.”

In response, 107 Venezuelan and Brazilian doctors from Caracas’ Salvador Allende Latin American Medical School (ELAM) were dispatched south of the border on Saturday to assist, in coordination with regional Brazilian authorities.

Alongside the so-called Simon Bolivar Medical Brigade, Venezuela also sent 136,000 litres of oxygen — equivalent to 14,000 individual tanks – as part of the humanitarian land convoy. The convoy, which will travel 1500 kilometres from Venezuela’s Puerto Ordaz to Manaus, is expected to arrive on Monday night or Tuesday morning.

Maduro explained that his government “has extended its solidarity to the people of Amazonas because they are our brother people. The Brazilian people should know that we are willing to help Brazil as much as we can.” Brazil’s far right President Jair Bolsonaro fails to recognise Maduro as Venezuela’s head of state and has broken off diplomatic relations between the two countries.