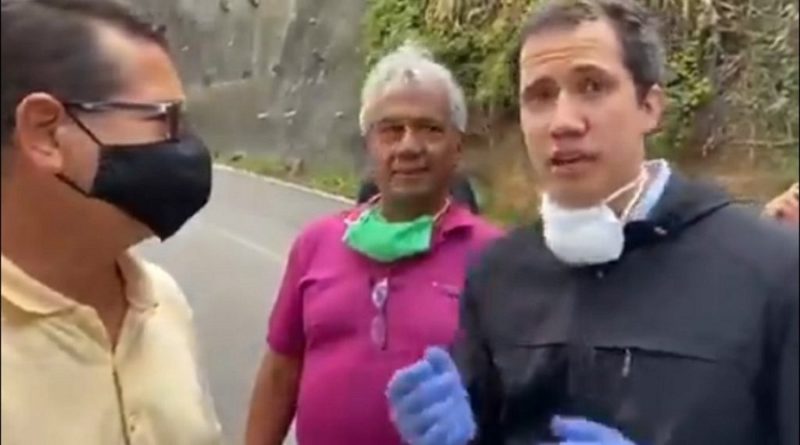 Today in a PR operation launched by anti-Chavismo, deputy Juan Guaido reached out to several drivers in line to fill their gas tanks due to the US embargo against Venezuela that the same opposition has promoted.

“There is no (Supreme Court) sentence that disables the desire of the people to have freedom to choose,” said the opposition deputy who greeted a dozen drivers who stood in line for gasoline in the affluent east of Caracas.

Juan Guaidó reappeared this Saturday, June 6, on the streets of Caracas through a set of videos in which he is seen talking to people who are in line for fuel. It was a photo operation launched to make Venezuelans believe he is not protected in a foreign embassy as accused by the Venezuelan minister of Foreign affairs in recent days. But in fact no one knows were he has been living for the last 2 weeks.

RELATED CONTENT: NGO “Sures” Presents the Impacts of US Sanctions Against Venezuela to the ICC

After several weeks of limiting his appearances to videos, while the government accused him of being in the French embassy, Guaidó reappeared saying: “The TSJ does what it wants. There is no sentence that disables the desire of the people to have freedom to choose,” the former head of the Parliament said in reference to a recent Supreme Court decision ratifying Luis Parra as the lawful head of Venezuelan parliament.

Many Venezuelans from Chavismo and anti-Chavismo have questioned the real motives of Guaidó and the whole opposition leadership for not providing solutions to the recent problems of gasoline shortages but instead, keep promoting US sanctions, US threats to the gasoline brought by President Maduro from Iran, and are not even able to provide gasoline produced by CITGO Corporation as it was seized by the US regime with the opposition’s assistance.

RELATED CONTENT: Siege Continues: US Threatens to Sanction 40 Tankers for Working with Venezuela

In social media many complained that the deputy from La Guaira did not keep the recommended social distancing and did not properly wear a face mask. Even the drivers that agreed to take photos and videos with him had a critic attitude toward him, asking him to avoid negotiation, referring to a recent agreement signed by the opposition and the Venezuelan government to liberate Venezuelan resources seized in international banks to fund Maduro’s successful response to Covid-19.

Another supporter participating in the photo op also told him that their sympathizers are getting desperate. “We cannot fall into despair (…) What Maduro wants is that we are not mobilized, that we are afraid,” he answered.

“At the end of this photo operation, Venezuelans still do not know exactly why is he in hiding, why is he taking advantage of the gasoline brought by Maduro’s government from Iran to launch a PR operation and why some few Venezuelans still believe at this point that the opposition wants to do something good for Venezuela instead of enriching themselves with all the money they have allowed the US to rob from us,” a political analyst said to Orinoco Tribune.